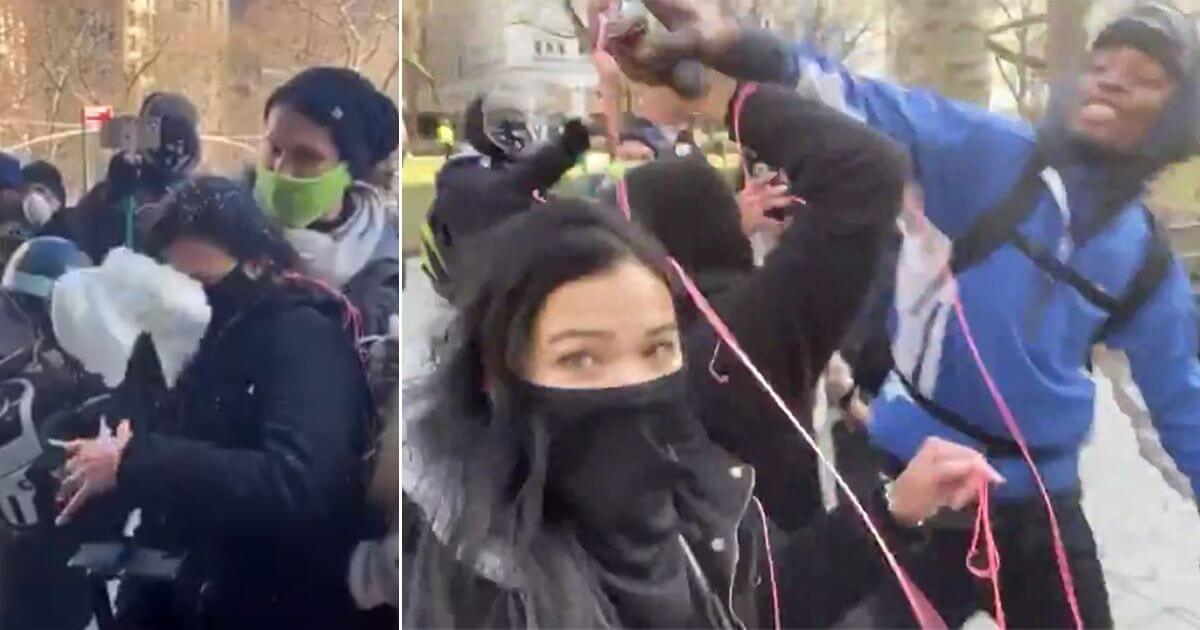 Two Black Lives Matter protesters were arrested during the past week in the assault of a conservative female reporter at a Jan. 10 BLM rally in New York City.

Among other things, police said the assailants smeared a soiled diaper on Tara Anne Szczepanski’s face at the BLM event, the New York Post reported. She apparently was attacked because they suspected she supported then-President Donald Trump.

Saqunn Jackson, 23, was arrested Tuesday and charged with aggravated harassment and stalking.

His alleged accomplice, Juarde Benn, 20, was arrested Feb. 5 and charged with attempted assault, menacing, criminal possession of a weapon and stalking.

Both suspects are now back on the streets. They were released thanks to New York’s no-bail law, which requires judges to release people accused of most crimes that aren’t violent felonies without posting bail.

Szczepanski — who’s half-Filipino and half-Polish — captured the disturbing attack on video and posted it on Twitter.

The former beauty pageant contestant said her assailants smashed an egg on her head, spat on her, hit her with an umbrella and knocked her over the head with a skateboard as a crowd egged them on and told one another not to protect her because “she’s for Trump.”

Szczepanski has admitted that she is a Trump supporter, but it’s unclear why the mob suspected that because she didn’t wear a MAGA cap or anything that might have identified her as such.

WARNING: The following videos contain vulgar language and violence that some viewers may find offensive.

I ran to the #NYP for help they told me to stay 6 feet from them and let me be attacked. pic.twitter.com/otVQaY9R0V

Attacked at a #BLM #Antifa #NyC rally, smashed egg in my head, hit with umbrella, spat on, knocked with a skateboard as the crowd says don’t protect her she’s for Trump. pic.twitter.com/hpSTdIaZt2

In the video, a terrified Szczepanski is heard helplessly screaming, “Do not touch me!” several times at her attackers.

Police said Szczepanski was filming the event when a group of BLM protesters surrounded her, shoved her, hit her on the head with an egg and knocked her cellphone out of her hand with an umbrella.

One of the assailants repeatedly sprayed her with silly string, while another rubbed a dirty diaper on her face, video shows.

This incident is one in a long string of violent attacks on Trump supporters and/or Republicans that the mainstream media downplay or ignore altogether.

The violence erupted when Donald Trump was elected president in 2016 and escalated this summer after the leftist media spent months stoking racial resentment by elevating Black Lives Matter Marxists as social justice heroes.

You can hear see and hear the female Trump Supporter cry in fear pic.twitter.com/No1QDp4KLd

The media’s absurd lionization of BLM and corporate America’s bending of the knee to outrage mobs has emboldened left-wing violence.

Media is acting like none of this ever happened. That Democrat, BLM, and Antifa rioters didn’t literally set dozens of cities on fire, destroy thousands of small businesses, and tens of innocents died in the process. Not a single Dem official condemned it.pic.twitter.com/335zlCNWZL

Unfortunately, this terrorism will continue because no one is holding the perpetrators accountable, and history is being whitewashed and rewritten to portray anarchists and thugs as paragons of virtue.

Antifa’s terrorists have physically attacked a peaceful Trump Supporter & hitting him over the head with a flag pole.
#MillionMAGAMarch pic.twitter.com/Qi5Mt3ScPQ

.@ElijahSchaffer got beaten up inside one of the stores for filming: pic.twitter.com/l2vbCe8Aeb

With the police neutered by disingenuous howls of “racism,” the left-wing violence will only get worse over the next four years under an emasculated Biden administration.

This is not peaceful protest, this will not be tolerated. pic.twitter.com/cYuDX8G7ku

For those who think left-wing terrorism is mainly a “big city” problem, remember that BLM protesters have promised that their brand of activism will metastasize into the suburbs.

“Every city, every town, burn the precincts to the ground!” they have repeatedly chanted.

“Every city, every town, burn the (police) precincts to the ground”

#BLM/Antifa terrorists march thru NYC’s streets with “Death to America” banner while chanting, “Every city, every town-Burn the precincts to the ground”
Re-elect @realDonaldTrump to stop the Democrat mob& restore #LawAndOrder!pic.twitter.com/9mTYnKowOv