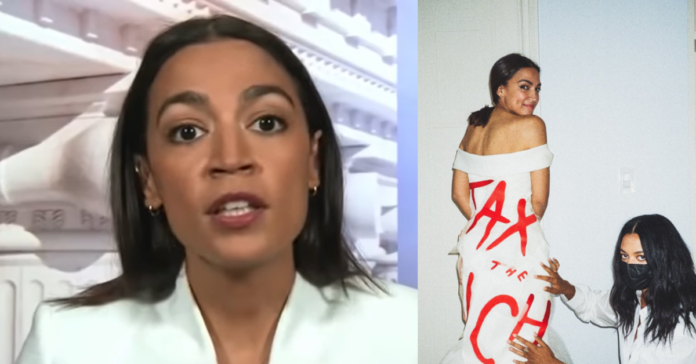 Rep. Alexandria Ocasio-Cortez gave up the game when her publicly stunt at the Met Gala backfired in ways she can’t even yet comprehend. The Democrats are performance artists not serious politicians and leaders.

Pelosi and her gang will pass bill after bill that has zero chance to pass the Senate because they want the optics and it makes them feel good. But nothing gets done because optics never translates to legislative victories.

We pay them to play act as if this is a big game to them and in a way, we should be thankful because they do less damage when they focus on headlines and not real accomplishments. Imagine all the damage the Dems, with all the power they have right now, could do if they were competent politicians not empty frauds.

One perfect example of this is AOC’s stunt at the Met Gala. This party is a big deal in New York. AOC is a celebrity now so there was no problem with her going although it is not a great look to be hobnobbing with movie stars in the middle of a pandemic.

But really no one would have cared. But that is not what she did. She wore a ‘tax the rich’ dress to a party celebrating celebrities and the wealthy with a wink and a nod so that the poor rubes in her district believed she had yet to go Hollywood.

AOC got the media attention she craves and the headlines she desires, and she went viral on social media. She got to explain her ‘clever stunt with no irony and it almost worked.

But it all came crashing down with a new report from the New York Post. It seems that AOC’s dress designer owes some back taxes and has a history of tax issues.

This is a perfect snapshot of the Dems. AOC telling you to pay your taxes while she laughs with someone who does the opposite.

Most of luxe-living James’ arrears center on Cultural Brokerage Agency, an LLC she formed in 2011 to serve as the parent company of her fashion brand, which today is known as Brother Vellies. It’s a favorite of people like Beyoncé, Rihanna, and Meghan Markle.

The company racked up three open tax warrants in New York state for failing to withhold income taxes from employees’ paychecks totaling $14,798, the state Department of Taxation and Finance told The Post. The debts — which were incurred before the pandemic — stem from 2018 and 2019. The company has been hit with 15 warrants in total since 2015.

The company got into a deeper hole with the feds. Between April 2018 and April 2019, the Internal Revenue Service placed six federal liens on Cultural Brokerage Agency totaling $103,220. The liens specifically cite the company’s failure to remit employee payroll taxes.

…Though AOC proudly labeled James a “working class” designer as they waltzed down the Met Gala red carpet, her lifestyle has been anything but. As the pandemic raged across America, igniting a deep recession, James scooped up a $1.6 million residence in Los Angeles in September 2020.

The Tudor-style home with cathedral ceilings, a master-bedroom fireplace and backyard hot tub sits on 7,095 square feet in the posh Hollywood Hills, according to RedFin.

True to form, the property is already listed as “delinquent” by the Los Angeles County assessor’s office, which told The Post James owed $2,504 in property taxes.