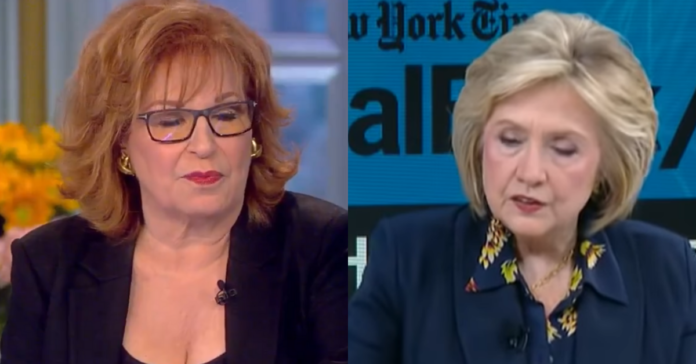 Joy Behar stunned the audience today on ABC’s The View when she made the astounding claim that the real victim of Bill Clinton’s sexual misconduct was…wait for it…Hillary Clinton.

Joy must be forgetting what Hillary did to the women who came forward, how ruthless Hillary was to shut down any leaks that could have hurt Bill’s political career.

“I don’t regret any joke I ever did,” Joy said of Monica Lewinsky. “Because in the moment it was funny and it was relevant — my intention is never to hurt anybody’s feelings, so I’m coming from a pure place with it.”

“Did the punishment fit the crime?” Sara Haines said before adding, “No. She became a pariah. And Hillary suffered, the women in Bill Clinton’s life suffered more than he did.”

“I would submit here that the real victim was the United States of America, and then Hillary Clinton, because if you remember when the debate was going on between Trump and Hillary, Trump brought in all these so called victims of Clinton’s peccadilloes,” Behar said.

Anna Navarro jumped in with: “If Democrats had done the same and brought in Trump’s victims, they would have needed an arena.”

“And to be clear, he allegedly abused women, Bill Clinton,” said Sunny Hostin.

“There was no remorse. He acted like it was an everyday occurrence. He was not the least bit apologetic. It was just unreal.”

After a commercial break, Hostin continued to go after Lewinsky, who Haines identified as a victim of her affair with the former president.

Haines argued that Lewinsky was being punished by the public based on a mistake she made at 22-years-old, noting that Lewinsky changed her name to avoid negative attention.

“You see Monica as a victim?” Hostin asked Haines at one point.

“I see her as more of a victim [than Clinton],” Haines said. “Even thinking equalizing that they both did something wrong is minimizing what was done here. You have a grown man, who is married, took vows, has loyalties and fidelities to a wife. He chose to be a dog, which we have forgiven for years. She was a girl who didn’t have a string of these types of things. She didn’t have a history of potential assaults or abuse of power —  she was 22.”

BIDEN SAYS IT’S “A DECISIVE DECADE” FOR CLIMATE CHANGE: @JoyVBehar, @SaraHaines, @Sunny, and @AnaNavarro react to Pres. Biden’s speech to the United Nations General Assembly and question if he should have addressed immigration. https://t.co/sKuYQUROgH pic.twitter.com/2fX7BamIPI

Joy Behar Slanders Trump On The View, Calls Former POTUS A Criminal: ‘Hillary Clinton could have been the president instead of that criminal that we had there for four years’