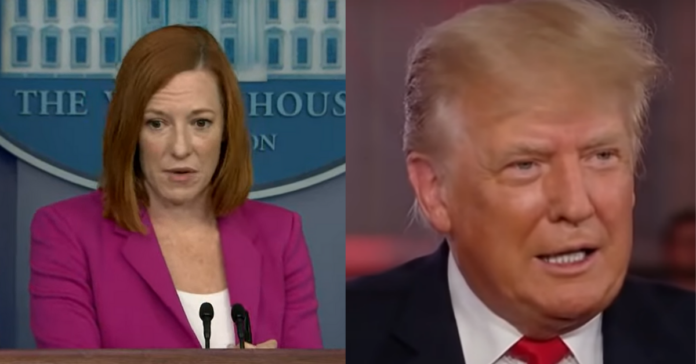 She said with a straight face: “What our role is, and what the president has asked his outreach team, his national security team, homeland security team to do, is to explain clearly what the policy is and is not.

We could not see it as any more different than the policy of the prior administration which the president feels and we all feel was inhumane, immoral, ineffective, wasn’t operationally working. And because of the dysfunction of it, we have led to a very broken system that we are dealing with today.

“So what he has asked all of us to convey clearly to the people who are understandably, have questions, are passionate, are concerned, as we are about the images that we have seen, is one, we feel those images are horrible and horrific.

“It’s also important for people to understand what our process and our immigration process is. “We are still under Title 42 because we are in a global pandemic so we are still operationalizing that. If people are not expelled under that, then there are a range of options.”

She continued: “He is the one that does not follow the constitution and would not allow those seeking refuge to petition to get into the country. What the hell are we doing here?

“What we witnessed takes us back hundreds of years.

“What they do is a training technique that has been shown to them to make sure that no one takes over their horse.

“Today, I had the honor of taking eight members of the Congressional Black Caucus and leadership directly to the White House.

“And part of that was to speak to those deplorable photos and ask why that all those recognized riding horses using their reins to chase down Haitians like they were cattle and goats to be suspended, terminated.

Dems Panic, Their worst Fears Are About To Come True, ‘I Don’t Know What The Plan B Is’