Marjorie Taylor Greene Heckles Dems On Capitol Steps: “You should all be ashamed” 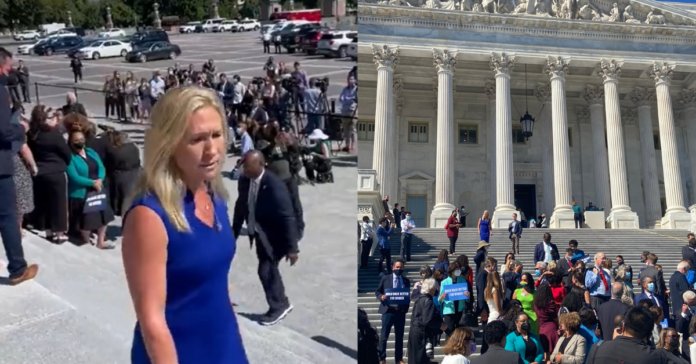 Rep. Marjorie Taylor Greene (R-Ga.) heckled House Democrats on the steps of the Capitol on Friday as the Dems were celebrating passing an abortion bill that will go nowhere in the Senate. The heckling led to a heard exchange with a few Dems.

“Killing a baby up until birth is not a right. That’s not healthcare,” Greene said. California Democratic Rep. Pete Aguilar, vice chairman of the House Democratic Caucus, said: “You’re performative.”

“No, you’re performative,” Greene fired back before adding, “You should all be ashamed.” Rep. Debbie Dingell (D-Mich.), yelled at Greene saying she showed a “lack of civility.”

“You know what,” Greene said. “Killing a baby up until birth is a lack of civility; it’s called murder.”

“You should try the basic thing you’re taught in church: Respect your neighbor” Dingell said.

“Try being a Christian and supporting life,” Greene said.

“You try being a Christian!” Dingell said. “And try treating your colleagues decently.”

Shortly afterward, Dingell sent out an email fundraising off of the exchange, saying Republicans such as Greene are going to keep “spreading misinformation and making attacks against Democrats’ agenda in Congress.”

“We know that women from Michigan get the job done, and today, Debbie stood up against a bully heckling her colleagues on the steps of the United States Capitol,” the email said.

For Greene, it’s just her latest confrontation with Democrats.

In January, the conservative first-term firebrand and close ally of former President Trump got into an argument over mask-wearing with liberal Rep. Cori Bush (D-Mo.) in a Capitol tunnel. Greene said Bush started it; Bush asked for her office to be moved away from Greene’s, citing her “team’s safety.”

Republican Rep. @mtgreenee gets into a shouting match with Democrats, incl. @BettyMcCollum04 and @RepDebDingell at the Democrats’ “Build Back Better for Women” photo-op

Reps. Debbie Dingell and Marjorie Taylor Greene just got in a shouting match on the Capitol steps right by where Democrats are gathering to pose for a photo. Before this clip other Dems yelled at her too

.@MTG and @RepDebDingell just got into screaming match on steps of Capitol after MTG heckled Democrats holding a press conf after passing legislation responding to Texas abortion law