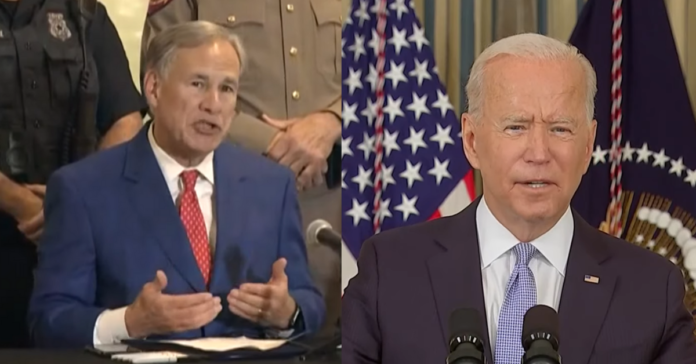 Texas Governor Greg Abbott (R-TX) went on Fox News today and overruled President Joe Biden as to the fate of the Border Patrol Agents who face punishment from the Biden administration over the treatment of migrants at the border.

There is an investigation ongoing but with Biden and Kamala seeming to have made up their minds, Abbott stepped in and said he would hire the agents if they lose their jobs.

Chris Wallace said, “A number of people have been, Democrats especially, have expressed outrage over those Border Patrol officers on horseback who were at the border and seemed to be trying to block Haitians pretty aggressively from coming across the border. Here was President Biden on all of that this week.”

Wallace played a video of Biden saying: “It was horrible what you saw coming to see people treated like they did, horses running them over and people being strapped. It’s outrageous. I promise you. Those people will pay. They will be an investigation underway now, and there will be consequences.”

Wallace said, “Governor, even if you think that those officers are being scapegoated, are you at all troubled by the images of these officers on horseback very aggressively pushing back on the Haitian immigrants coming across?”

Abbott said: “They wouldn’t have been in that situation had the Biden administration enforce the immigration laws and secure the border in the first place.

“As you know, course, the person who took those pictures said that the characterization that the Democrats have made about the Border Patrol using them as whipping people coming across the border is false.

“They were simply maneuvering horses.

“I will tell you is what the president said going after the Border Patrol who were risking their lives and working so hard to try to secure the border.

“If he takes any action against them whatsoever, I have worked side by side with those Border Patrol agents, I want them to know something.

“If they are at risk of losing their job by a president who is abandoning his duty to secure the border, you have a job in the state of Texas.

“I will hire you to help Texas secure our border,” he said.

Gov. Greg Abbott to Border Patrol agents who whipped at Haitian migrants from horseback: “I will hire you to help Texas secure our border.”

The blockage prevents individuals & groups from illegally crossing into Texas.

Texas is securing the border.@TexasGuard @TxDPS

The blockage prevents individuals & groups from illegally crossing into Texas.

“Let’s Not Talk About Numbers & Dollars”