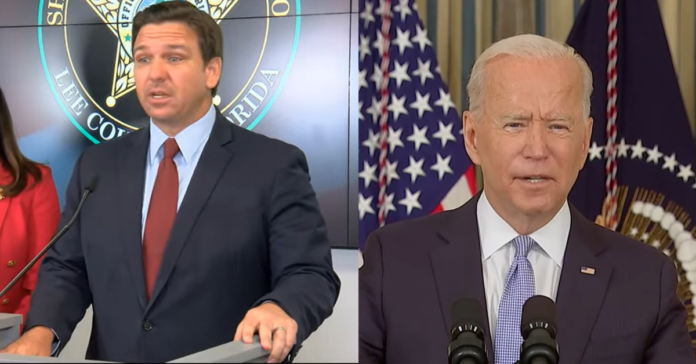 “They are farming out people all across communities across the United States, including here in Florida. This is absolutely a crisis. It’s a crisis of the administration’s own making. This continued release of folks on a very mass scale and unprecedented scale will saddle states and local governments with health, financial, economic, and public safety costs.

“The numbers speak for themselves. The number of encounters at the southwest border has skyrocketed from 78000 in January to over 210,000 in July. That’s a 171% increase.

“That’s the highest monthly total in more than 20 years and there’s no sign of it slowing down.

“You have another 208,000 in August, and that was again close to another record. Additionally the number of illegal aliens who were issued a notice to appear in court and subsequently released by the border patrol, which means they’re not actually going to appear, in July alone was a staggering 60,607.”

“Today, Governor DeSantis was joined by Attorney General Ashley Moody to announce three significant actions Florida is taking to address the Biden Border Crisis. First, Governor DeSantis has issued Executive Order 21-223 to prohibit all Florida agencies under the purview of the Governor from facilitating illegal immigration into Florida, unless otherwise required by federal or state law, and require the collection of information from state officials on the scope and costs of illegal immigration in Florida.

Second, Governor DeSantis announced the appointment of Larry Keefe, former U.S. Attorney for the Northern District of Florida, as Public Safety Czar to ensure the actions directed by the executive order are carried out. Finally, Governor DeSantis and Attorney General Moody announced that Florida has filed suit against the Biden Administration challenging its “catch and release” policy.

“Since President Biden took office – which has been less than one year – the Border Patrol has released nearly a quarter million illegal aliens into the United States,” said Governor Ron DeSantis. “This executive order makes it clear that Florida resources will not be used to prop up the failed open border agenda enacted by this administration.

Attorney General Ashley Moody has also filed a lawsuit against the Biden Administration challenging its policy of catching and releasing the staggering number of illegal aliens apprehended at the border into the United States.

“Further, I am proud to appoint Larry Keefe, the former U.S. Attorney for the Northern District of Florida, to serve as Public Safety Czar as we take key steps to protect Florida taxpayers from bearing the burden of reckless immigration policies. We will continue to hold the federal government accountable for refusing to enforce the immigration laws of this country.”

“The Biden Administration’s brazen disregard for federal immigration law is jeopardizing the safety and security of our state and nation, all while costing Florida taxpayers. Biden’s lax border policy is an open invitation to dangerous criminals, human traffickers and drugs traffickers to enter the United States—creating a crisis at the Southern Border like we have never seen,” said Attorney General Ashley Moody.

“Because Biden is not requiring those crossing the border to go through the legally mandated channels, they are coming into our country without being properly processed. The federal government cannot simply ignore federal laws because it does not agree with them politically. The Biden administration must implement the immigration policy required under federal law and we are asking the court to take swift action to reduce the harm caused by Biden’s inaction.”

“As a former U.S. Attorney, I saw illegal aliens that would get deported and come back, and then get deported and come back in an endless cycle,” said Larry Keefe, Public Safety Czar. “The states, including Florida, bear the brunt of this cycle. Over the coming weeks and months, our state agencies will be addressing the impacts illegal immigration has had on our state. I want to thank Governor DeSantis for appointing me to lead these efforts.”

Today’s announcements build off previous actions taken by Governor DeSantis. Most recently, the Governor sent a letter to Alejandro Mayorkas, Secretary of the U.S. Department of Homeland Security on August 26th, urging the Biden Administration to provide more transparency concerning the resettlement of illegal aliens in Florida and to consult in advance with state leadership before illegal aliens are resettled in the state. The letter has gone unanswered.

Additionally, the number of illegal aliens who were apprehended and subsequently released by the Border Patrol in July alone was a staggering 60,607, a massive increase from the 1,324 in this category who were released in January.

By contrast, in the last full month of the Trump Administration, only 17 aliens in this category were released,” the statement said.

Gov. @RonDeSantisFL just announced he is SUING Biden over his out-of-control border crisis and is signing an executive order to prohibit the release of illegal criminal migrants into Florida.

Take notes Republicans.
This is how you fight back. pic.twitter.com/3m3Dqa8QpK

WHOA! Did Nancy Pelosi Just Admit Barack Obama Is Leading Their Party From Behind The Scenes? Democrats Need To "Address full Obama agenda of 'Building back better'" [VIDEO]

Gen. Mark Milley Admits He Spoke To Multiple Reporters For Their Books About Trump