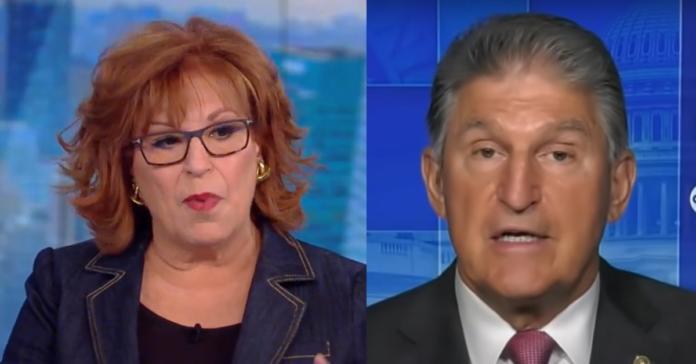 Joy Behar ripped Sens. Kyrsten Sinema, D-Ariz., and Joe Manchin, D-W.Va., saying they were ‘must be brought to task’ for stalling Biden’s agenda. She didn’t stop there, she went to actually say they are ‘the enemies right now of the democracy.’

She said: “The Democrats have the numbers to make it happen, but Manchin and Sinema are standing in their way.  They call themselves Democrats, and they will be the ruination of this nation. Those two.

“These people are destroying the country in my opinion. We are so in trouble in this country, I don’t know if people understand how dire the situation is.

“If Joe Biden loses, if the Democrats lose, the Republicans, who are so corrupt right now and we all know that, they will move in, Trump will run in 2024 – he might win because of all the cheating that’s going on.

“We cannot let this happen.

“Manchin and Sinema must be brought to task.

“They are the enemies right now of the democracy.

“Yes, we have a great democracy, but it is really on life support right now because of these two people”

“Don’t you think it’s so unfortunate that we’ve worked so hard to flip Georgia blue.

“We’ve got two Democratic senators now, and you have people that are supposed to be a part of a strong Democratic coalition, like Manchin, like Sinema, being so obstreperous that President Biden, who is supposed to be fighting for the soul of this country, can’t get the job done.”

“The fact that it’s Democrats who are holding it up is making me sick,” Behar added.

TOP GENERALS CONTRADICT BIDEN ON AFGHANISTAN: Top military leaders testified Tuesday about the withdrawal from Afghanistan, contradicting Pres. Biden’s claim that he does not recall anyone advising him to leave troops behind — the co-hosts react. https://t.co/pvJixILu42 pic.twitter.com/eZcax9Rp7U

BIDEN’S APPROVAL ON KEY ISSUES DROPS: A new ABC News/Ipsos poll finds Americans’ confidence in the president’s handling of a range of issues is eroding — the co-hosts discuss how he’s handling this critical moment for his legislative agenda. https://t.co/QdTqdVE8Ix pic.twitter.com/bKEdQGxsRl

[VIDEO] Pelosi Gets Ridiculed For Flashing The "White Power" Sign