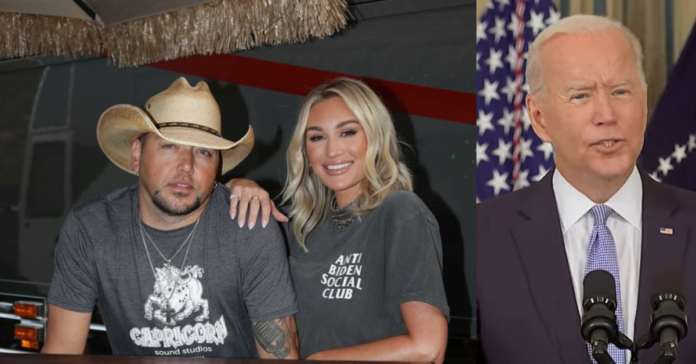 Country music superstar Jason Aldean told the hysterical left to go pound sand over some anti-Joe Biden posts his wife made on social media saying he will not back down or apologize.

He said: “I will never apologize for my beliefs or my love for my family and country. This is the greatest country in the world and I want to keep it that way.”

Jason’s wife Brittany came under fire after she shared a series of pictures on social media showing her wearing a T-shirt that read, “Anti Biden Social Club. She also posted a picture of her kids wearing clothing with a message that read, “Hidin’ from Biden.”

The left went after her on social media causing Jason to tell them all off.

“Watch your mouth lady,” he told one rude commenter.

“We will teach our kids what we think is right and what we think is best for their future,” he added. “If you think what is happening right now is ‘great’ for the future of our kids and grandkids, you are delusional,” he said.

“Definitely better than what we got now!” Aldean continued.

“Please tell me one thing that the current administration has done that is positive? Just 1,” he challenged.

“I personally don’t give a damn if people don’t agree with me. I think it’s important now more than ever to stand for what you believe, even if it ‘goes against the grain.’

Do your research, and form your own opinion – speak out if you wish. But most importantly, don’t bully people who feel differently than you,” she shared at the time.

Jason Aldean spoke out in support of his wife after she shared photos of herself and their young children wearing anti-Joe Biden clothing.

Over the weekend, Brittany Aldean took to Instagram over the weekend where she shared a series of images, the first showed her posing next to her husband while wearing a shirt that reads “Anti Biden Social Club.”

Other photos she shared in the post showed her kids, Memphis, 3, and Navy, 2, wearing shirts that read “Hidin’ from Biden.”

The clothes are sold at a website called DaddyT45, an obvious reference to former President Donald Trump. The clothing brand boasts several pro-Trump and anti-Biden pieces of clothing as well as an entire line dedicated to those who want to show that they are unvaccinated against the coronavirus.

Jason Aldean says he’ll ‘never apologize’ for his beliefs after family gets criticized for anti-Biden merchhttps://t.co/Pw6RnwbcYX