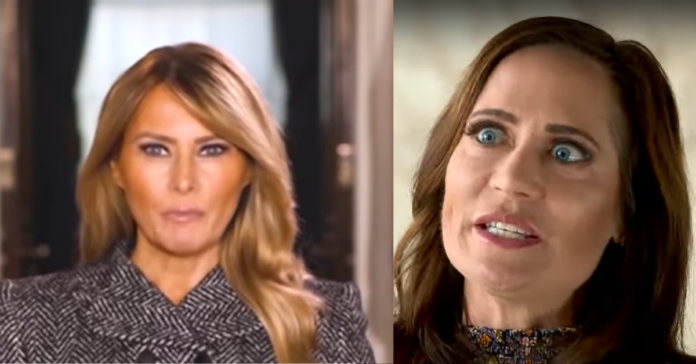 Melania Trump fired back at her former White House press secretary Stephanie Grisham, who also served as Melania Trump’s chief of staff, over her new book.

Grisham was as loyal as they come until she wasn’t or until she was offered a big check to trash the first family especially the former first lady.

So far the book seems to be about leaking gossip, like the staff called Jared and Ivanka the interns, rather than anything that matters.

Melania is not happy and denounced her former staffer today when her office issued a statement saying:

“The author is desperately trying to rehabilitate her tarnished reputation by manipulating and distorting the truth about Mrs.Trump.

“Ms. Grisham is a deceitful and troubled individual who doesn’t deserve anyone’s trust.”

Melania’s office issued an earlier statement that said: “The intent behind this book is obvious. It is an attempt to redeem herself after a poor performance as press secretary, failed personal relationships, and unprofessional behavior in the White House.”

“Through mistruth and betrayal, she seeks to gain relevance and money at the expense of Mrs. Trump.”

Grisham served as Melania Trump’s chief of staff before going on to become the third Trump White House press secretary, following Sean Spicer and Sarah Huckabee Sanders. She served in the role from July 2019 to April 2020 and drew sharp criticism for not holding a single press briefing in that time.

The former president assailed Grisham’s book as “bad and untrue” and claimed she “didn’t have what it takes” to work in his administration.

“Stephanie didn’t have what it takes and that was obvious from the beginning,” Trump said in his statement through a spokesperson. “She became very angry and bitter after her break up and as time went on she was seldom relied upon, or even thought about. She had big problems and we felt that she should work out those problems for herself. Now, like everyone else, she gets paid by a radical left-leaning publisher to say bad and untrue things.”

NEW statement from @OfficeofMelania on Stephanie Grisham:
“The author is desperately trying to rehabilitate her tarnished reputation by manipulating and distorting the truth about Mrs.Trump.
Ms. Grisham is a deceitful and troubled individual who doesn’t deserve anyone’s trust.”