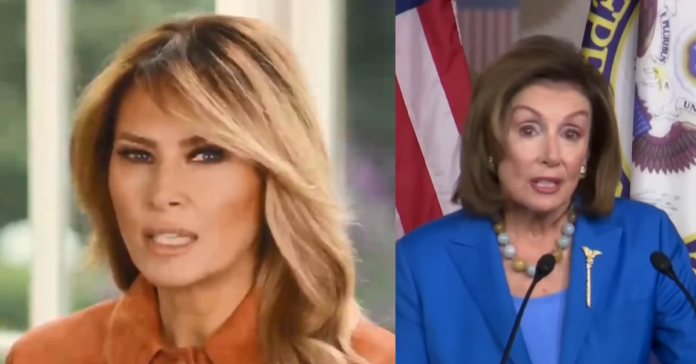 Melania Trump’s former chief of staff has a new book out and is claiming Speaker Nancy Pelosi had a meltdown at the White House after arguing with Trump and screamed at a young White HOuse receptionist.

Stephanie Grisham detailed the behind-the-scenes action about the famous picture of Pelosi standing up wagging her finger at Trump and his team.

“Things got tense quickly,” Grisham wrote. “At one point, Pelosi stood up and pointed at the president. ‘All roads with you lead to Russia,’ ‘You gave Russia Ukraine and Syria.’”

“With that, the Democratic leadership got up and walked out,” Grisham wrote but they had to retrieve their phones.

“That was when Pelosi seemed to blow up,” wrote Grisham.

The White House receptionist, a young woman, was “caught off guard by the early departures” and “stumbled around looking for the correct phones.”

“We can’t even trust you people with our phones,” Pelosi screamed before accusing the TRump admin from bugging her phone.

“I never should have given you guys my phone! I know you bugged it,” Grisham wrote.

“Pelosi then started calling the young woman incompetent and raged that there was not an umbrella available to her so she could go out to the microphones in the rain and berate the president in front of the cameras,” wrote Grisham.

“I know that so many people hated Donald Trump, they would excuse anyone for anything if it was done in opposition to him.

“Still, Pelosi screaming at a young girl was totally unprofessional behavior, and it was exactly what she accused Trump of doing all the time — bullying.

“I will say, though, that Trump could bring out the worst in people too.”

Disturbing New Trend Has Kids Slapping Their Teachers, Recording It, And Posting It on Social Media