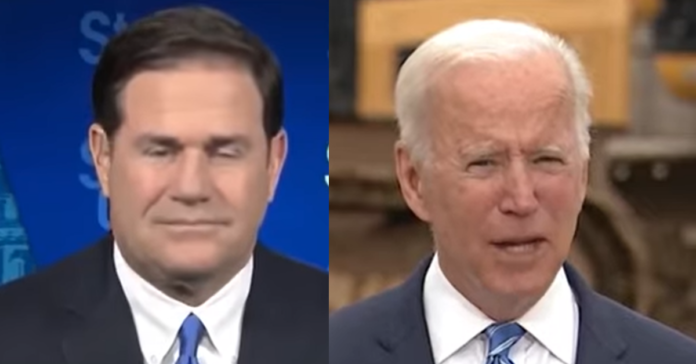 Governor Doug Ducey (R-AZ) put President Joe Biden on notice over the ongoing crisis at the border saying it is “just as out of control.” He said:

“What’s already happening in Yuma is reflective of what’s happening on the Texas border. Arizona is a border state. We faced this before, but we’ve never faced a crisis this large in 21 years.

“Governors are not going to sit around while President Biden refuses to act. We’ve tried to meet with the president and be part of the solution, but he refuses. No, worse — he ignores governors, just like he’s ignoring the border and the safety of the American people.

“The White House has suggested there are no solutions or steps they could take on the border. This is false.

“If the president won’t meet, we have laid out a comprehensive set of policy actions — publicly — that would end the border crisis immediately.

“President Biden now has everything he needs to stop this crisis.”

Governor Greg Abbott (R-TX) said in a letter to Biden:

“I request that you reconsider your denial of an emergency declaration for the State of Texas as a result of the ongoing border crisis, which reached such magnitude and duration that, on May 31, 2021, I formally recognized the disaster, and which continues to escalate as evidenced by the dire situation in Val Verde County.

“The Department of Homeland Security’s strategy to address the migrant crisis has not alleviated the need for federal assistance to allow Val Verde County and the State of Texas to effectively respond to and recover from the ongoing border crisis,” he wrote.

From The Washington Examiner:

Ducey activated the National Guard on a border deployment to support local law enforcement assisting at the border in April as human smuggling began to rise. That deployment was extended one year in August.

The state legislature approved $25 million for the National Guard’s border mission in June and $30 million for police to work with border authorities.

The state’s border security operations are overseen by the Arizona Department of Public Safety and known as the Border Strike Force. Between May and June, state police seized 55 pounds of heroin, nearly 510 pounds of methamphetamine, nearly 180 pounds of fentanyl, and more than 20 guns.

In recent months, more than 200,000 people have been caught attempting to illegally enter the country by way of the southern border each month.

It is far more than the 78,000 encounters in January when President Joe Biden took office and began rolling back former President Donald Trump’s border and immigration policies.

The Biden @WhiteHouse has suggested there are no solutions or steps they can take to end the border crisis. This is false. Governors put together a 10-point plan the Biden administration can use to immediately end the border chaos. 1/ pic.twitter.com/rjhvi5QAWC

It starts with dedicating every available federal resource to stop drugs and human trafficking at the southern border. Border Patrol is overwhelmed. Local and state law enforcement are filling in the gaps. It’s not enough. We need more. 2/