Trump Accuses NYC Mayor Of Confiscating Golf Project: “This is what happens in Communist Countries, not in America” 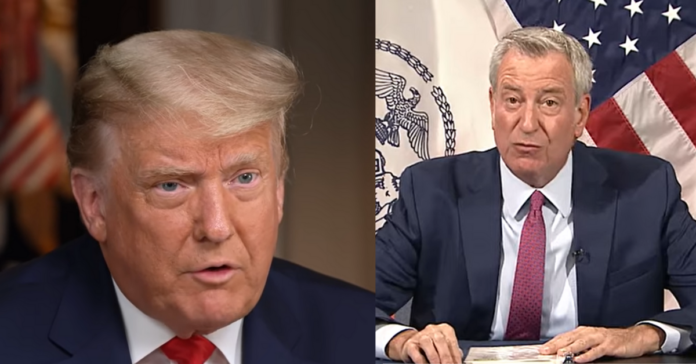 In 2012 Trump inked a 20-year deal to build and operate the links at Ferry Point, a Jack Nicklaus-designed public golf course in the Bronx. Michael Bloomberg was New York City Mayor at the time. Now, the current Mayor Bill de Blasio is yanking the contract.

Trump said: “At the request of Mayor Bloomberg, the former Mayor of New York City, I took a longtime scandal-ridden site in the Bronx, which for almost 30 years had been a money-losing disaster that the city could not get built, and transformed it into a magnificent Jack Nicklaus Signature designed golf course.

“I invested many millions of dollars, all cash, in this project in order to get it done, which I did, starting from scratch, in record time.

“Now under Mayor De Blasio, he wants to CONFISCATE the project from me for no reason whatsoever, and terminate my long-term arrangement with the city.

“Mayor De Blasio wants to take it away after all of the work was so successfully done, and so much money was spent.

“So unfair—this is what happens in Communist Countries, not in America!”

Mayor de Blasio said he would try to yank the contract after Jan 6:

“The City of New York will not be associated with those unforgivable acts in any shape, way, or form,” de Blasio said in January.

A notice published Monday shows a company called Ferry Point Links LLC is set to be awarded a 13-year Parks Department deal to take over the Jack Nicklaus-designed 18-hole course at the foot of the Bronx-Whitestone bridge.

A firm incorporated under that name in late August, state corporation records indicate — sharing both an executive’s name and address with one of the city’s biggest homeless shelter operators, CORE Services Group.

An attorney for the former president vowed to fight the city — and the proposed new golf course operators — for control of the links, charging Trump is a victim of “political retaliation.”

A spokesperson for the city Department of Parks and Recreation said that CORE will be teaming up with Bobby Jones Links, an Atlanta company that will be “managing the operation of the concession.”

CORE Services Group did not respond to requests for comment Monday, and Bobby Jones Links was not immediately reachable.

According to the notice posted in Monday’s City Record, Ferry Point Links, LLC will pay a minimum of $300,000 a year to the city — or a share starting at 7% of the gross proceeds and gradually escalating to 10% by year 13, whichever is higher.

Those terms are slightly more favorable to the operator than those granted to Trump in 2012, in a 20-year deal struck to salvage a troubled project. Trump also committed $10 million to build a clubhouse.

“…this is what happens in Communist Countries, not in America!” pic.twitter.com/amZ0Tq11wc