Dem Senator Rips Supreme Court Justice Samuel Alito: ‘You have fouled your nest, not us’ 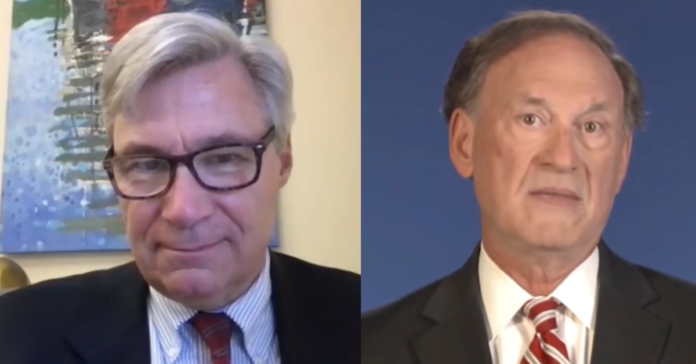 Sheldon wrote: “Justice Samuel Alito wants desperately for us to believe that everything is just fine at the Supreme Court. Indeed, in his view the court is a victim.

“Before an audience at Notre Dame on Sept. 30, Alito denounced “unprecedented efforts to intimidate the court.” He aimed his outrage at the media, at leading legal academics, and at people like me who are concerned about, as he put it, the Supreme Court “deciding important issues in a novel, secretive, improper way in the middle of the night, hidden from public view.”

“The problem for Justice Alito’s sense of grievance is that the evidence supports our concerns. Alito has participated in a pattern of decisions — like the court’s recent “shadow docket” ruling suspending abortion rights in our second-biggest state — that deliver wins for big Republican donors.

“Americans’ perception that the court lacks independence, and the court’s related drop in approval, doesn’t flow from some left-wing conspiracy. It’s a recognition that the evidence shows a pattern whenever certain interests come before the court.

“How strong a pattern? During Chief Justice John Roberts’ tenure, the Court has issued more than 80 partisan decisions, by either a 5-4 or 6-3 vote, involving big interests important to Republican Party major donors. Republican-appointed justices have handed wins to the donor interests in every single case.

“The decisions greenlit rampant voter suppression and bulk gerrymandering (Shelby County v. Holder and Husted v. Randolph Institute); closed courthouse doors to workers wronged by their employers (Epic Systems Corp. v. Lewis); unleashed floods of dark money to corrupt our politics and foul our democracy (Citizens United v. FEC and Americans for Prosperity Foundation v. Bonta); and more. Eighty to zero is a pattern so strong that it could serve as compelling evidence in a trial alleging bias and discrimination.

“This pattern did not just happen. It is the fruit of a half-century-long operation by right-wing donors to win through the Supreme Court what they can’t win through elected branches of government.

“In 1971, a corporate attorney from Virginia named Lewis Powell wrote a memo for the U.S. Chamber of Commerce laying out a game plan for corporations and right-wing ideologues to use “an activist-minded Supreme Court” as an “instrument for social, economic, and political change.” (Within months, Powell himself would be appointed by Richard Nixon to the court to advance the plan from within. His memo was never disclosed to the Senate.)

“Powerful interests have a long, sordid history of “regulatory capture.” Volumes have been written on that history. For big donors, turning the techniques of regulatory capture to the Supreme Court was a short leap. Of course it can’t be obvious, so the court-capture operation would obscure its influence using front groups and anonymous secret funding.

“Perhaps Justice Alito is so touchy because his fingerprints are all over this pattern of Republican judicial activism. Consider his decades-long judicial campaign against public sector unions, a prime political target of major Federalist Society donors like the Lynde and Harry Bradley Foundation.

“Anti-labor front groups with financial ties to the Federalist Society and Bradley Foundation eagerly rushed cases to the court tailored to that invitation, and Alito delivered new First Amendment rights to strike the precedent and gut the unions.  Textualist or originalist principles were nowhere to be found in his opinion.

“If Alito and the Republican majority on the Supreme Court want the public to believe the court is not a secretive political “cabal” (his word) doing the bidding of big donors who helped put them there, they should deal with the evidence.

“Explain the 80-0 donor win record. Disclose who’s behind the dark-money briefs. Stop the special-interest fast lane around the “case or controversy” requirement. Report gifts and hospitality — not worse than the other branches of government do, but better. Take precedent seriously when it doesn’t suit you, not just when it does. Ditto recusal.

“Put yourself under a code of ethics, like every other federal judge.

“And understand that you have fouled your nest, not us, and that the Supreme Court must now at least match every other political institution with a renaissance of transparency.

“Democracy demands it. And the Court That Dark Money Built has squandered the benefit of the doubt,” he wrote.

Bookmark This One: Another Day Another Biden Lie That’s Going To Come Back To Haunt Him

WATCH: LA County Sheriff says he won’t enforce vaccine mandate on his officers nor on anyone else