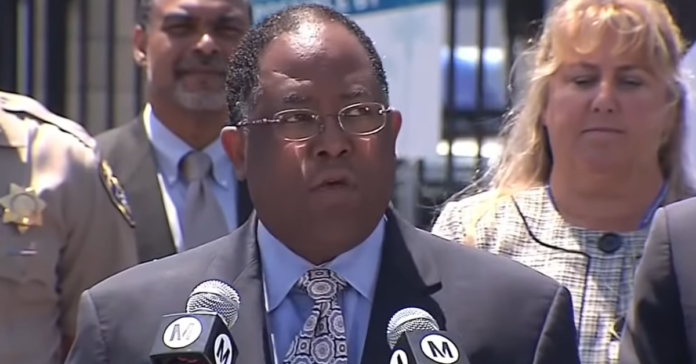 Los Angeles City Councilman Mark Ridley-Thomas was indicted Wednesday on federal bribery charges. The indictment alleges that he took bribes from a USC dean in exchange for directing millions of dollars in public funding to the university when he was on the L.A. County Board of Supervisors.

“This indictment charges a seasoned lawmaker who allegedly abused the public’s trust by taking official actions to benefit his family member and himself,” said Acting U.S. Attorney Tracy L. Wilkison. “The corrupt activities alleged in the indictment were facilitated by a major university’s high-ranking administrator whose desire for funding apparently trumped notions of integrity and fair play. Public corruption cases are among the most important matters we pursue, and we will continue to investigate and prosecute whenever public officials and others entrusted with taxpayer funds break the law.”

“This investigation should send a message to public officials that government contracts are not for sale,” said Kristi K. Johnson, the Assistant Director in Charge of the FBI’s Los Angeles Field Office. “This indictment reaffirms the FBI’s commitment to rooting out corruption by holding accountable those who abuse the trust of the people they serve and who exploit their powerful positions to obtain benefits at the expense of taxpayers.”

DOJ issued a statement that said:

Longtime politician Mark Ridley-Thomas and the former dean of the School of Social Work at a university in Southern California were indicted today on federal corruption charges that allege a bribery scheme in which a Ridley-Thomas relative received substantial benefits from the university in exchange for Ridley-Thomas supporting county contracts and lucrative contract amendments with the university while he served on the Los Angeles County Board of Supervisors.

The 20-count indictment alleges that Ridley-Thomas, now a member of the Los Angeles City Council, conspired with Marilyn Louise Flynn, formerly a tenured professor and the dean of the university’s School of Social Work, who agreed to provide the Ridley-Thomas relative with graduate school admission, a full-tuition scholarship, a paid professorship, and a mechanism to funnel Ridley-Thomas campaign funds through the university to a non-profit to be operated by the relative.

In exchange, the indictment alleges, Ridley-Thomas supported contracts involving the Social Work School, including contracts to provide services to the Department of Children and Family Services (DCFS) and Probation Department, as well as an amendment to a contract with the Department of Mental Health (DMH) that would bring the school millions of dollars in new revenue.

Ridley-Thomas, 66, of Los Angeles, and Flynn, 83, also of Los Angeles, were informed of the indictment this afternoon and have agreed to appear for their arraignments in United States District Court in the coming weeks.

The indictment outlines a scheme in 2017 and 2018 in which then-supervisor Ridley-Thomas sought benefits from Flynn and university officials to benefit his close relative – described as “MRT Relative 1” in the indictment – at a time when MRT Relative 1 was the subject of an internal sexual harassment investigation in the California State Assembly, likely to resign from elected office, and significantly in debt.

Ridley-Thomas allegedly wanted to help secure paid employment for his relative to minimize any public fallout for them both in the wake of the sudden resignation from office. Meanwhile, the Social Work School was facing a multimillion-dollar budget deficit, which threatened the school’s viability as well as Flynn’s position and reputation as the school’s longtime dean, according to the indictment.

As part of the bribery scheme, Ridley-Thomas and Flynn allegedly took steps “to disguise, conceal, and cover up the bribes, kickbacks, and other benefits defendant Ridley-Thomas and MRT Relative 1 received,” which included concealing the official acts Ridley-Thomas agreed to perform and did perform in exchange for the financial benefits.

The pair also concealed, according to the indictment, the true purpose of the money funneled to MRT Relative 1’s nonprofit through the university, which also violated multiple university policies regarding the funding of nonprofits.

Within weeks of Ridley-Thomas contacting Flynn in May 2017 about his relative wanting a postgraduate degree from the university, Flynn began a campaign to secure both university admission and a full scholarship for the relative. Flynn wrote in an email that she “intend[ed] to open every door for [MRT Relative 1],” whom she noted was closely related to the then-supervisor, the indictment alleges.

During a June 2017 meeting, Ridley-Thomas and Flynn allegedly reached a quid pro quo agreement, which Flynn later memorialized in a confidential letter she had hand-delivered to Ridley-Thomas.

The indictment alleges that Flynn’s letter detailed her expectations that Ridley-Thomas would steer new contracts with DCFS and Probation to the Social Work School and secure a lucrative amendment to an existing Telehealth-DMH contract.

With the new amendment, Flynn expected the Telehealth contract to generate approximately $9 million per year for Flynn’s Social Work School.

In exchange for Flynn’s efforts to help MRT Relative 1, the indictment alleges that Ridley-Thomas took a series of official actions, including voting in August 2017 to approve a motion to establish a partnership between the county and Social Work School and voting in October 2017 to approve a motion, related to “Probation University,” that would create a new county payment source for the school.

Flynn told university officials in emails that she was “very happy to see that [defendant Ridley-Thomas] was as good as his word” and that he was “really trying to deliver,” the indictment alleges.

In the fall of 2017, Ridley-Thomas and MRT Relative 1 began soliciting from Flynn and other university officials a paid professorship for MRT Relative 1 while concealing that MRT Relative 1 was the subject of a sexual harassment investigation.

By December 2017, in conjunction with speculation that MRT Relative 1 could be forced out of office, Ridley-Thomas and his relative increased their efforts to secure a paid faculty position for MRT Relative 1, efforts that included Ridley-Thomas exerting pressure on another high-ranking public official to support the Telehealth contract amendment.

On December 14, 2017, about an hour after Ridley-Thomas emailed Flynn saying the high-ranking public official was “ready to go,” Flynn expedited the relative’s enrollment at the university, instructing that the admission should be given the “highest priority,” according to the indictment.

Flynn also agreed, despite the school’s multimillion-dollar budget deficit, to tap the Social Work School’s endowed funds to award a scholarship. At Flynn’s direction, MRT Relative 1 received a full scholarship worth $26,000 for the 2018 spring and summer terms.

The day after learning that the high-ranking public official was “ready to go,” Flynn also endeavored to quickly secure the paid professorship, even though MRT Relative 1’s dual student-faculty status would violate university policy.

On December 15, 2017, Flynn allegedly sent an “urgent” email to a university official, urging the official to get the offer letter “out before the holidays” to MRT Relative 1 “in the interests of showing MRT [defendant Ridley-Thomas] that we can deliver.” The university thereafter offered MRT Relative 1 the paid teaching position with a salary of $50,000.

When MRT Relative 1 received an email on February 13, 2018 indicating that the usual hiring process had been waived for his paid professorship, MRT Relative 1 forwarded the email to Ridley-Thomas, who then emailed Flynn the same day to discuss the “Probation Reform motion.”

Days later, when Flynn emailed Ridley-Thomas to request a profitable amendment to the Telehealth-DMH contract, Ridley-Thomas responded to Flynn: “Your wish is my command.”

In addition to obtaining university admission, a full scholarship and the paid faculty position, Ridley-Thomas also sought to help his relative become the director of a nonprofit. In December 2017, Ridley-Thomas donated $100,000 in campaign funds to a fiscal sponsor (Fiscal Sponsor A) supporting the nonprofit MRT Relative 1 was planning to head (Nonprofit A). Concerned about the optics of a politician donating campaign funds to benefit the politician’s relative, Fiscal Sponsor A refunded the $100,000.

MRT Relative 1 then abandoned efforts to head Nonprofit A, founded a new nonprofit (Nonprofit B) with a new fiscal sponsor (Fiscal Sponsor B), and began raising money for Nonprofit B in order to take a salary, obtain healthcare benefits and hire staff.

According to the indictment, while soliciting official action from Ridley-Thomas during a meeting on April 26, 2018, Flynn agreed to funnel $100,000 from the Mark Ridley-Thomas Committee for a Better L.A. through the university and Social Work School to Fiscal Sponsor B for the benefit of Nonprofit B and, in turn, MRT Relative 1. Around this time, Flynn allegedly told a university official that the school would get the Telehealth contract but that she had to do a “favor” to get it.

After the Ridley-Thomas campaign funds were transferred through the university to Fiscal Sponsor B, Ridley-Thomas voted on July 31, 2018 in favor of the amendment to the school’s Telehealth agreement that would sustain the program for an additional year and was consistent with the terms Flynn previously requested of Ridley-Thomas.

An indictment contains allegations that a defendant has committed a crime. Every defendant is presumed innocent until and unless proven guilty beyond a reasonable doubt.

Los Angeles City Councilman Mark Ridley-Thomas and a former dean at the University of Southern California have been indicted on federal bribery and corruption charges that involved political support for county contracts, prosecutors say. https://t.co/0i9lLFUiuS

Ruth Bader Ginsburg Slams Anthem Kneelers From The Grave: “Contempt for a government that has made it possible for their parents and grandparents to live a decent life”