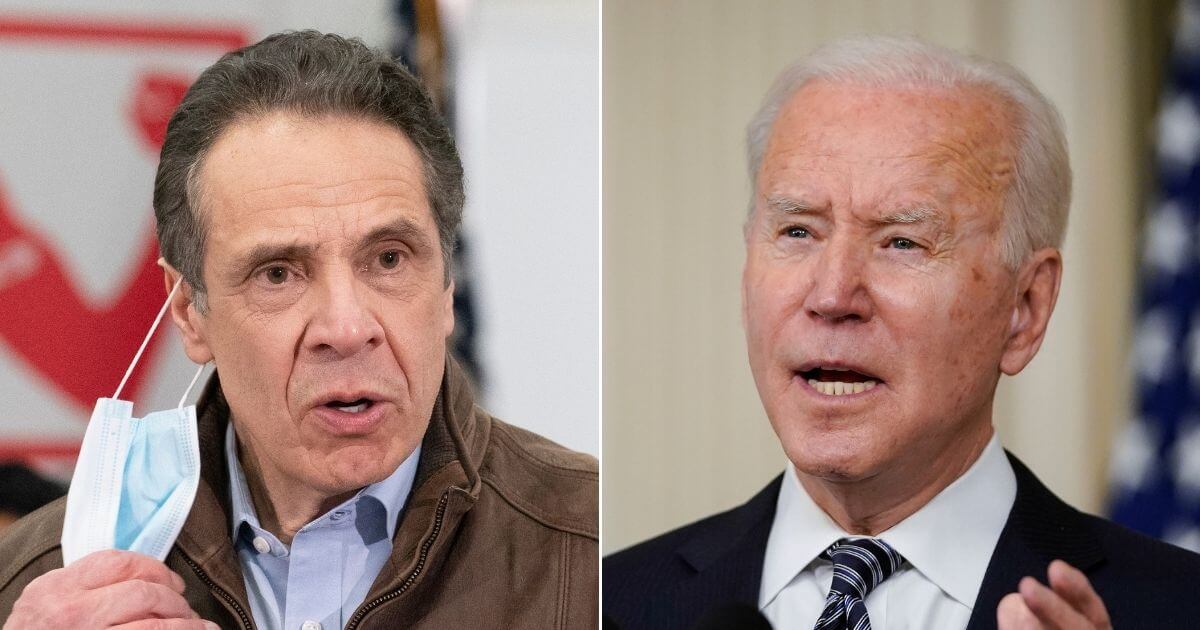 President Joe Biden is being soft on New York Gov. Andrew Cuomo while other Democrats are calling for his resignation. Perhaps he feels the two have a certain kinship of creepiness?

So far, nearly 30 lawmakers in New York’s congressional delegation and over 120 in the state legislature have called for Cuomo to resign amid mounting accusations of sexual misconduct.

Democratic heavy hitters in the state like Rep. Alexandria Ocasio-Cortez and Sen. Chuck Schumer have joined the chorus, which would normally seal the fate of such a politician.

Yet Biden, the highest-ranking Democrat in the nation, told reporters on the White House lawn Sunday, “I think the investigation is underway and we should see what it brings us.”

Biden’s careful, measured approach to such allegations is generally a good idea, but with so much stacked against the governor — including the bigger scandal of the thousands of COVID-19 nursing home deaths — it may have something to do with their common traits.

Both Cuomo and Biden have been accused of sexual misconduct, and both have used the same pathetic excuse about it being just their way of doing things.

After a disturbing photo surfaced that showed one such encounter between Cuomo and accuser Anna Ruch, the governor used that familiar tale.

“A third woman has accused Governor Cuomo of unwanted touching and sexual attention, saying he placed his hands on her face and asked if he could kiss her at her friend’s wedding,” Evan Hill of The New York Times captioned the tweeted photo.

“A friend took a series of pictures of the incident as it occurred.”

A third woman has accused Governor Cuomo of unwanted touching and sexual attention, saying he placed his hands on her face and asked if he could kiss her at her friend’s wedding. A friend took a series of pictures of the incident as it occurred. https://t.co/bgvzBK4vK0 pic.twitter.com/hXvgTvSntQ

“You can go find hundreds of pictures of me kissing people,” Cuomo explained to reporters at a media briefing after the photo came out.

“Men, women, it is my usual and customary way of greeting,” he said.

Maybe other “customary” interactions include allegedly forcefully kissing women, asking aides to play strip poker and quizzing women whether they’re into older guys — and those are just some of the “greetings” reported.

This echoes the defense Biden used as far back as 2019 after several women accused him of making them feel uncomfortable — a year prior to the most damning accusation.

“Social norms are changing,” Biden wrote in an April 2019 tweet.

“I understand that, and I’ve heard what these women are saying,” he said.

“Politics to me has always been about making connections, but I will be more mindful about respecting personal space in the future. That’s my responsibility and I will meet it.”

Social norms are changing. I understand that, and I’ve heard what these women are saying. Politics to me has always been about making connections, but I will be more mindful about respecting personal space in the future. That’s my responsibility and I will meet it. pic.twitter.com/Ya2mf5ODts

Over the years, Biden had been caught “making connections” with roving hands and an odd habit of sniffing young girls, with many such instances caught on tape and turned into a supercut of “creepiest hits” by Donald Trump Jr. in August.

But the most serious allegations surfaced in March 2020 when Tara Reade, a former Senate aide to Biden, accused him of sexually assaulting her in 1993.

The media jumped to defend Biden, and Reade’s story fell off the radar for most media outlets.

Perhaps Cuomo is hoping the same thing happens to his accusers, but he’s clearly unaware that his time in office is up as far as Democrats are concerned.

He was useful to them when he was clubbing Trump early in the COVID-19 pandemic, but he’s politically radioactive now that the truth about the deaths of vulnerable citizens he allegedly caused and the subsequent cover-up have come to light.

Still, he finds favor with Biden since they are similar in the way they treat women and the excuse they use to wriggle their way out of it.

It’s never OK to touch, kiss, sniff, grab or otherwise treat women in a way that makes them feel uncomfortable.

The fact that either man could be taken seriously at all with such a defense demonstrates the double standard applied to politicians based on political affiliation.

Men like Cuomo and Biden lurk everywhere they have both unchecked power and people at the ready to excuse their behavior and buy their pathetic alibis — in other words, they’re right at home in the Democratic Party.

And who knows — maybe if Cuomo does heed calls to resign, Biden will have to follow suit.