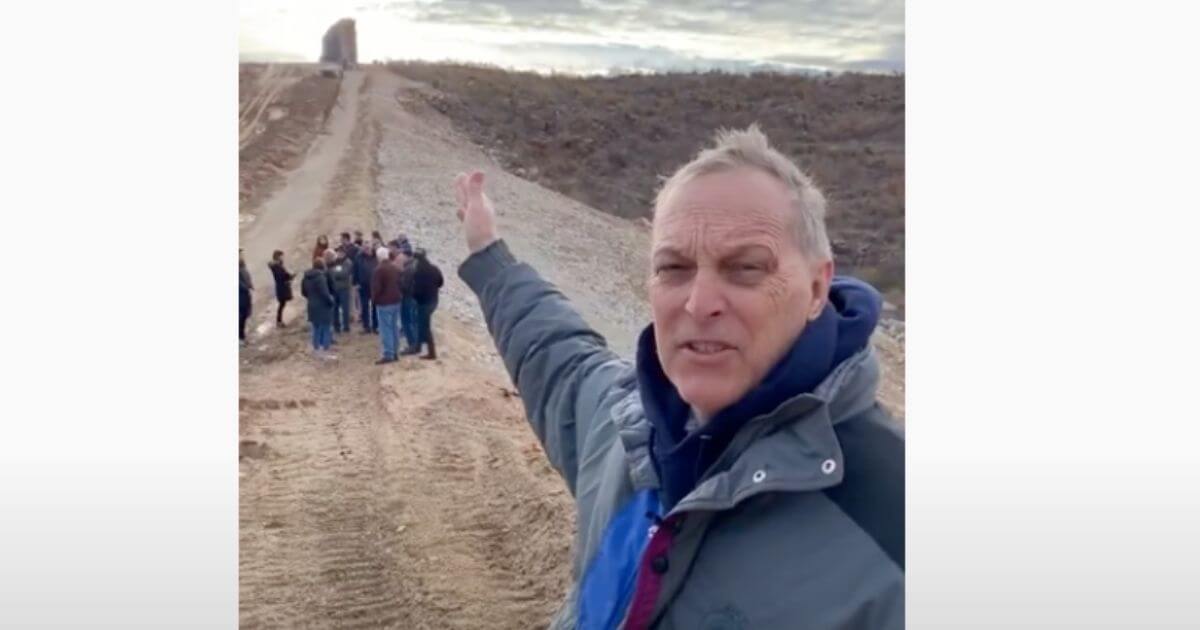 Rep. Andy Biggs of Arizona and some of his Republican House colleagues visited the southern border this week to see the impact of President Joe Biden’s decision to halt construction on the border wall.

In a proclamation issued on his first day in office, Biden said, “Like every nation, the United States has a right and a duty to secure its borders and protect its people against threats.

“But building a massive wall that spans the entire southern border is not a serious policy solution,” he continued. “It is a waste of money that diverts attention from genuine threats to our homeland security.”

“It shall be the policy of my Administration that no more American taxpayer dollars be diverted to construct a border wall,” Biden said.

Former President Donald Trump’s plan funded approximately 740 miles of border wall construction along the approximately 1,900 miles that make up the U.S.-Mexico border. He has pointed out due to the ruggedness and/or remoteness of much of the terrain, a wall is not needed along the entire southern border.

Over 450 miles had been built by the time Trump left office.

Biden ended his predecessor’s national emergency declaration regarding the southern border and halted all current construction of the wall.

In one of his last acts as president, Trump visited the southern border in Texas and celebrated the completion of 450 miles of the new wall system.

“In every region that we’ve built the wall, illegal crossings and drug smuggling have plummeted,” Trump said.

“In the Rio Grande Valley, crossings have dropped nearly 80 percent,” he added.

“In Yuma, Arizona, illegal entries have been slashed by 90 percent.”

Biggs, who is a member of the House Judiciary Committee and House Committee on Oversight and Reform, posted video on Friday from the U.S.-Mexico border in Cochise County in southeast Arizona.

“That’s one of the top smuggling spots in this area right now,” Biggs said.

The Trump administration was building the wall up a mountain range in Cochise County that was known for rampant drug smuggling.

The Biden administration stopped construction last week, leaving the corridor even more exposed than before. pic.twitter.com/CHh2OtkAp5

The lawmaker pointed out all the earthmoving equipment that was brought off a nearby mountain in response to Biden’s order to end construction.

“All of the folks that worked here, they’re out of work now, and we’re not building a fence in the number one area where smuggling is coming through in this part of the border,” he said.

A border wall construction team in Cochise Count packing up to leave since the Biden Administration halted construction of the wall at the U.S. Mexico border. pic.twitter.com/4TavRkQkHu

Biggs explained to del Guidice that because of the immediate stop in border wall construction, there are openings in the wall, where drainage gates were to be installed, but now will not.

“This is really a huge problem,” Biggs said.

“The Biden administration needs to get their act together, because they’re actually, by not enforcing our border, they are actually facilitating human smuggling, sex trafficking and drug trafficking.”

“For every two linear miles that you have fencing, you need one Border Patrol agent to effectively patrol that,” he added.

“When you don’t have any fencing — for every mile, it takes three to five Border Patrol agents.”

Biggs said it’s “an almost eight-to-one ratio of number of agents that you need to control the border when you don’t have a fence.”

How is the Biden Administration facilitating human smuggling and sex trafficking by halting construction on the border wall? @RepAndyBiggsAZ explains! pic.twitter.com/zeG9hjBl1y

Other House members who joined Biggs on the border inspection trip were Reps. Lauren Boebert of Colorado, Warren Davidson of Ohio and Barry Moore of Alabama.

We have to remember that border security is national security.

Harmful drugs make their way to the United States by first crossing the border. Drugs like methamphetamines and fentanyl have taken the lives of too many Ohioans. CBP is doing important work and deserves our thanks. pic.twitter.com/7NRE6pEWe3

In an October news release, the Department of Homeland Security touted the efficacy of the wall.

“In one short 12 mile section in the San Diego Sector, the wall reduced CBP manpower requirements by 150 agents every 24 hours,” the DHS said.

“That is approximately a $28 million return on investment per year in salaries and benefits. These agents were redeployed to fill resource gaps in other areas of the border — further improving our security.”

The department also noted in all the sections the new border wall has been installed, illegal entries plummeted, including 87 percent in the Yuma Sector.

An update from the US border with Mexico: work on the #border #wall has stopped. pic.twitter.com/8RL9ThoqAk

Apprehensions fell 79 percent another zone in the Rio Grande Valley Sector, and 70 percent in multiple zones in the El Paso Sector.

There was strong bipartisan support for the 2006 Secure Fence Act, which authorized the construction of physical barriers at the border.

Among those voting for the measure was then-Sen. Biden.

Trump's Base Is 'Getting Stronger' Since He Left Office, Impeachment Would Only Empower Him [VIDEO]