Before Signing Barrage of Executive Orders, Biden Said Only Dictators Rule That Way 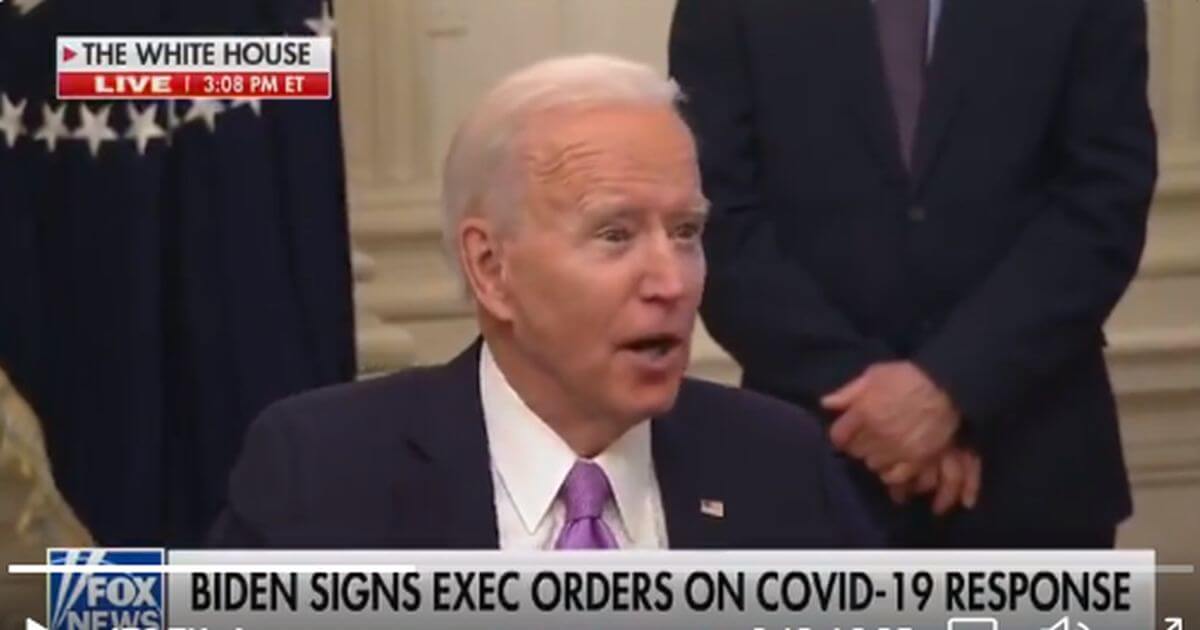 Democrats tend to be strict constitutionalists and scrupulous about government overreach — but only when they aren’t the party in power.

After a little over a week in office, President Joe Biden has used executive orders to ram through his pet causes two dozen times and counting.

Biden has killed jobs, stripped protections for the unborn, expanded immigration, kowtowed to the radical transgender enthusiasts and expanded Obamacare, just to name a few items he ticked off his agenda through presidential fiat.

However, during the 2020 campaign, candidate Joe Biden was staunchly against the misuse of presidential executive orders to get things done, at least according to his remarks in October.

Appearing on an ABC town hall discussion, moderator George Stephanopoulos asked the then-candidate about taxing goods manufactured overseas as a way to encourage companies to make products in America.

“So there’s not going to be any delay on the tax increases?” Stephanopoulos asked.

“I got to get the votes,” Biden replied. “That’s why, the one thing, I have this strange notion. We are a democracy,” he said.

“Some of my Republican friends and some of my Democratic friends, even occasionally say, ‘Well, if you can’t get the votes by executive order, you’re going to do something. Things you can’t do by executive order unless you’re a dictator,’” he continued. “We’re a democracy; we need consensus.”

.@JoeBiden in October: “I have this strange notion, we are a democracy … if you can’t get the votes … you can’t [legislate] by executive order unless you’re a dictator. We’re a democracy. We need consensus.” pic.twitter.com/7UotJCXSm3

As the fact-checking outlet PolitiFact pointed out, it’s true he was referring specifically to taxes in this instance.

“Biden was not criticizing all executive orders as hallmarks of a dictatorship — the full context of his statement suggests that he believes an executive order on taxes would be an inappropriate use of executive power in a democracy. Biden has not issued orders on tax policy,” the outlet claimed.

Still, in a general sense, it’s not as much of a stretch as PolitiFact tries to make it seem to say that Biden compared using executive orders to unilaterally impose preferred policies to being a “dictator” and damaging “democracy,” which would indicate he planned to govern by the book when he got the chance.

But now that he’s holding the pen, Biden has no problem signing away as the radical leftist agenda is enshrined into American law, order after order.

It’s typical that his view on using executive orders would change based on the party in the White House, along with his cronies in the establishment media.

In 2014, National Public Radio gushed about former President Barack Obama getting things done through executive order while bragging “I’ve got a pen, and I’ve got a phone” to pass whatever his heart desired.

President Donald Trump was treated quite differently by that same publication years later as Democrats such as House Speaker Nancy Pelosi railed against his executive actions, calling them “absurdly unconstitutional.”

However, Pelosi called it “a day of great hope and progress” in her remarks about Biden’s reversal to Trump’s restrictions on transgenders serving in the military.

The U.S. government was set up with a delicate ecosystem of checks and balances that would keep the government in check and prevent abuses of power.

Although many presidents have utilized executive orders, Biden instead is unabashedly wielding it as a tool for radical transformation of the country while the complicit establishment media mostly look on like proud parents at their kid’s music recital.

American representative government is about consensus, in which the will of the people is followed through the proper channels of government.

Allowing a president to unilaterally act as a dictator is destructive to the future of the nation — just as Biden said.

Biden Chooses More War, Troops to Stay in Afghanistan Beyond May Deadline According to NATO sources