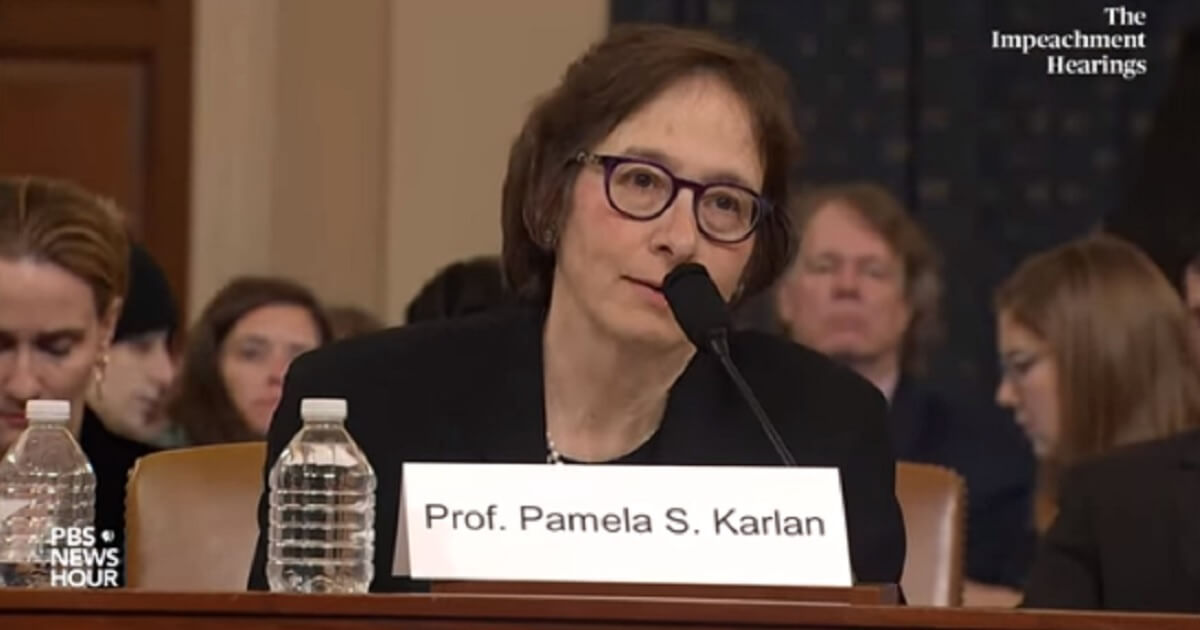 As the president’s party prepares to impeach his predecessor for allegedly inciting an “insurrection” by speaking to supporters in the nation’s capital Jan. 6, news was spreading Monday that his Justice Department had hired one the most notorious witnesses from Donald Trump’s first impeachment.

Americans might remember her as the woman who made fun of a teenager’s name on national television.

Pamela Karlan, who rocketed to infamy during an exchange with Texas Democratic Rep. Sheila Jackson Lee in which Karlan mocked the name of Trump’s youngest son, Barron, is joining the Justice Department as principal deputy assistant attorney general in the department’s Civil Rights Division, according to Politico.

The announcement came from the independent oversight board of Facebook, where Karlan had been serving since May.

The fact that an outspoken Trump critic was a member of the board that decides what content is suitable for publication on the social media giant speaks volumes about the political slant of social media censorship in the contemporary world.

The fact that she’s now going into a high position in the Justice Department under Biden speaks volumes about the political direction of the new administration.

None of it bodes well for American conservatives.

At the time of the testimony that made her notorious, Karlan was a Stanford University law professor with deep-seated hatred of Trump that she apparently had no problems expressing publicly.

But it wasn’t just Trump, and it wasn’t just the Trump presidency Karlan disliked. An outspoken leftist, she delivered a speech in 2006 that lambasted the kind of American conservative who exists primarily in the leftist imagination:

“We have to seize back the high ground on patriotism and our love of our country,” Karlan said then. “Because we have more reason than they do to love America.

“The rich, pampered, prodigal, sanctimonious, incurious, white, straight sons of the powerful do pretty well everywhere in the world and they always have.

“But what about us? Snarky, bisexual Jewish women who want the freedom to say what we think, read what we want and love who we do.”

That might have been an argument in 1950s America, but in the modern world, “rich, pampered, prodigal” and especially “sanctimonious” are a lot more synonymous with the left than the right.

More importantly, the political group that’s bent on keeping Americans from reading and saying what they want is overwhelmingly on the left — Karlan’s own side.

For just recent, off-the-top-of-the-head examples, look at Twitter permanently suspending then-President Trump’s account in January, or Facebook and Twitter’s indefensible censorship of the story of Hunter Biden’s laptop and the very real possibility that it included evidence that the man who is now in the White House has had undisclosed business contacts in China, the United States’ most dangerous global adversary. This is serious business.

The fact that a woman whose worldview is so delusionally leftist is going to be an important voice in the Justice Department’s Civil Rights Division should give chills to every American who actually cares about the civil rights embedded in the Constitution (like, say, the First Amendment’s freedom of religion and the Second Amendment’s right to bear arms).

News of Karlan’s new job drew scorn from conservatives on social media (conservatives who haven’t been banned or left on their own, anyway).

It’s payment time. Which position is going to be offered to Justice Kavanaugh’s accuser?

What impressive job could one get making fun of Biden’s crack gigolo son?

We have seen the DOJ to be corrupt, I guess this proves it.

It figures! Nothing about this administration will surprise me. It just saddens & angers me!

As forgettable as the Trump impeachment trial really was in the Senate – its basis was self-evidently nonsense; its result, an acquittal, was a foregone conclusion – Karlan’s lame attempt at publicly mocking the name of a then-13-year-old boy is one of the few things that are memorable about the House hearings that led up to it.

But for those who might not recall the specifics, Karlan told Jackson Lee that one way the Constitution limited presidents was that they did not have the power to confer titles of nobility, “So while the president can name his son Barron, he can’t make him a baron.”

(What Karlan calls “snarky Jewish women” are generally funnier than that.)

She’s clearly leftist, clearly partisan and clearly is coming from a culture at Facebook that tends to have little respect for the political right.

Joe Biden’s Team Unity is coming together, all right. And it’s going to be coming right for anyone who disagrees with the left.