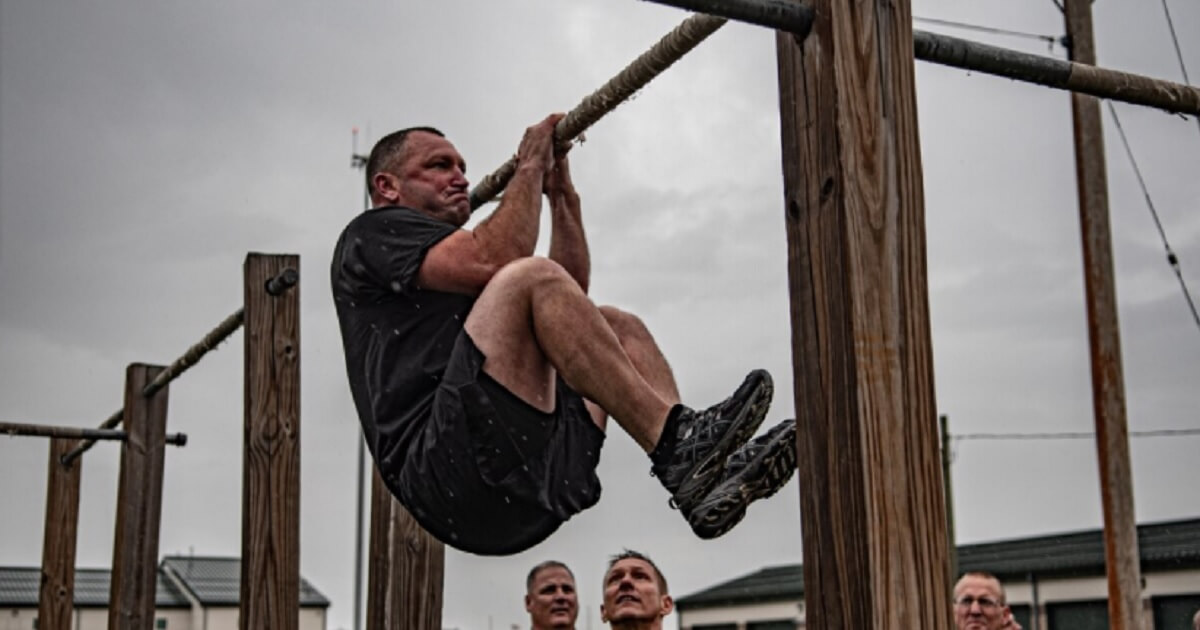 In proof that nothing will convince some liberals that there are physical differences between the genders and that this could have consequences for military readiness, Task & Purpose reported last month the military is considering changes to the Army Combat Fitness Test, unveiled just three years ago, that would score individuals by gender percentile instead of against the entire field.

The ACFT was designed to replace the decades-old Army Physical Fitness Test, according to Stars and Stripes, which included age and gender in scoring. That was supposed to make it more gender-neutral while still better preparing troops for the physical demands of the battlefield.

There are six events in the ACFT: A deadlift, a standing power throw (tossing a medicine ball behind you), hand-release push-ups, a shuttle run in which weight must be dragged, a leg-tuck test and a two-mile run.

An individual’s performance in the test wasn’t going to be used as part of the process in deciding promotions until mid-2022, according to Stars and Stripes. However, Congress ordered the Army to stop administering the test until it could be reviewed in the 2021 National Defense Authorization Act, which became law on Jan. 1 over then-President Donald Trump’s veto.

Now, slides describing “ACFT 3.0” have leaked on social media and were obtained by Task & Purpose. While Army brass had said that there would be adjustments to the ACFT over the next few years, the direction of the test seems to be going from gender-neutral to readiness-irrelevant.

Among the proposed changes in the “pre-decisional” slides are, according to Task & Purpose, “eliminating competition between genders and scoring men and women in percentiles of their gender. Another proposal includes removing numerical fitness test scores from soldiers’ files for promotion boards in favor of color codes symbolizing their percentile in an effort to remove bias.”

“We know there is a physiological difference between men and women,” one slide said.

“The Army has to account for this and remove the competition between genders or Congress will never allow ACFT implementation. The goal of the ACFT is to reward the most physically fit, this accomplishes that accounting for biological differences.” [Emphasis ours.]

Women are not as physically fit, at least by the standards of the ACFT. The goal of the ACFT is to reward physical fitness. Therefore, the way to reward it is to grade men and women by percentile within their own gender, rather than competing with each other.

That’s logical, assuming, of course, that an enemy force’s soldiers are also made up of women fighting American women.

If the test is supposed to accurately mimic battlefield conditions, however, it’s actually military readiness that’s taking the L. One also suspects military leadership isn’t willing to take the L, either, considering the Democrats and liberal pressure groups have made opposition to the ACFT in its current form a priority.

In an Oct. 20 letter to the chairmen and ranking members of the House and Senate Armed Services obtained by The Washington Post, Sens. Kirsten Gillibrand of New York and Richard Blumenthal of Connecticut said implementation of the ACFT was “premature” and urged Congress to put a halt to it.

“We have considerable concerns regarding the negative impact [the test] may already be having on so many careers,” they wrote. “It is imperative that we pause implementation until all questions and concerns are answered. Soldiers’ careers depend on it and the continued lethality of our force requires it.”

In a November letter to Congress, the Service Women’s Action Network also pressured lawmakers to halt the ACFT’s implementation, saying “too many otherwise qualified soldiers are failing elements of the test.”

“We are concerned that the considerable time and effort each soldier will have to commit to reaching and maintaining the high levels of strength the ACFT demands — especially over a career that spans 20 or 30 years — will reduce [the] emphasis on other attributes important in combat such as leadership, trust, and teamwork,” the letter read.

But what if it’s the choice of activities measured by the tests? As The Washington Post pointed out, the “most problematic for women who have taken it to date, a ‘leg tuck,’ in which soldiers lift themselves up from a pullup bar using their arm, core and leg muscles.”

The so-called ACFT 3.0 would fix that, too, if these “pre-decisional” slides end up becoming policy. Soldiers wouldn’t have to perform the leg tuck, instead opting for a two-minute plank — holding a position similar to a push-up, except with the elbows on the ground.

Task & Purpose reported, however, that “the plank can come with its own challenges, specifically related to a grader’s subjective opinion on whether or not a soldier’s back is flat enough to qualify.”

“So particularly a lot of more curvaceous women are feeling like they’re kind of getting profiled,” said an anonymous female Army officer. “And it’s a natural thing with age … that happens to everyone. So a lot of older people are like, ‘That’s as straight as it goes, buddy!’”

As National Review noted in an editorial on the ACFT controversy last week: “It’s not uncommon for a stout young American to march to the field with 100 or 120 pounds on his back: weapons and ammunition, grenades and mortar rounds, water and chow, flak, SAPI plates, and Kevlar helmet, tourniquets and bandages, night optics and range finders, a headlamp, batteries and more batteries, a map, compass, and protractor, note-taking gear, a sleeping system, tarp, and poncho liner, extra socks and warming layers, waterproofing bags, a toothbrush, a razor, and plenty of baby wipes, a blister kit, along with a bottle of Motrin and at least five cans of chewing tobacco. Oh, and don’t forget the extra boot laces.”

Perhaps they can do without the chewing tobacco, but we’re now a country that has women on the front lines. We’re also a country determined to embrace a culture of gender equality in the military. We’re not talking gender-neutral standards; that’s so 2015. What we’re talking about is ensuring as many members of the distaff gender are filling every role in the military as possible. If the test doesn’t produce that, it’s the test’s fault. Readiness is a secondary objective.

And under the Biden administration, pressure to achieve this equality of outcome won’t just consist congressional letters or executive orders.

Most notably, Fox News’ Tucker Carlson took issue with some of the changes the Biden administration was making to the military earlier this month — “designing body armor that fits women properly, tailoring combat uniforms for women, creating maternity flight suits, updating requirements for their hairstyles,” as the president himself noted during a media briefing.

At that point, the full invective of the Pentagon was turned on a private citizen (albeit one with a highly rated TV show) who dared to criticize the new policies.

Not only did the Pentagon’s press secretary call Carlson out in a news conference, the Pentagon released a statement titled, “Press Secretary Smites Fox Host That Dissed Diversity in U.S. Military.”

A military leader in uniform took to Twitter, in uniform, to condemn Carlson, implying his opinion didn’t matter because he’d never served a day in uniform. (To give him the least amount of credit possible, he kind-of-sort-of backtracked in a second Twitter video — out-of-uniform, of course — in which he said “I don’t make political comments, and I certainly don’t attack our media.”)

If this unprecedented use of military messaging to undermine a television host who criticized the Biden administration’s military wokeness offensive, think about what happens to any military leader who says scrapping the ACFT will affect readiness.

Make no mistake: Those “ACFT 3.0” slides may have been termed “pre-decisional,” but the only way the final decision will be substantively different, under the Biden administration, is if the standards are watered down even further.

12-Year-Old Tackled, Stabbed in Neck at McDonalds, In Critical Condition

Trump Responds When Asked Why He's Weighing in on Border Crisis, "They're Destroying Our Country"