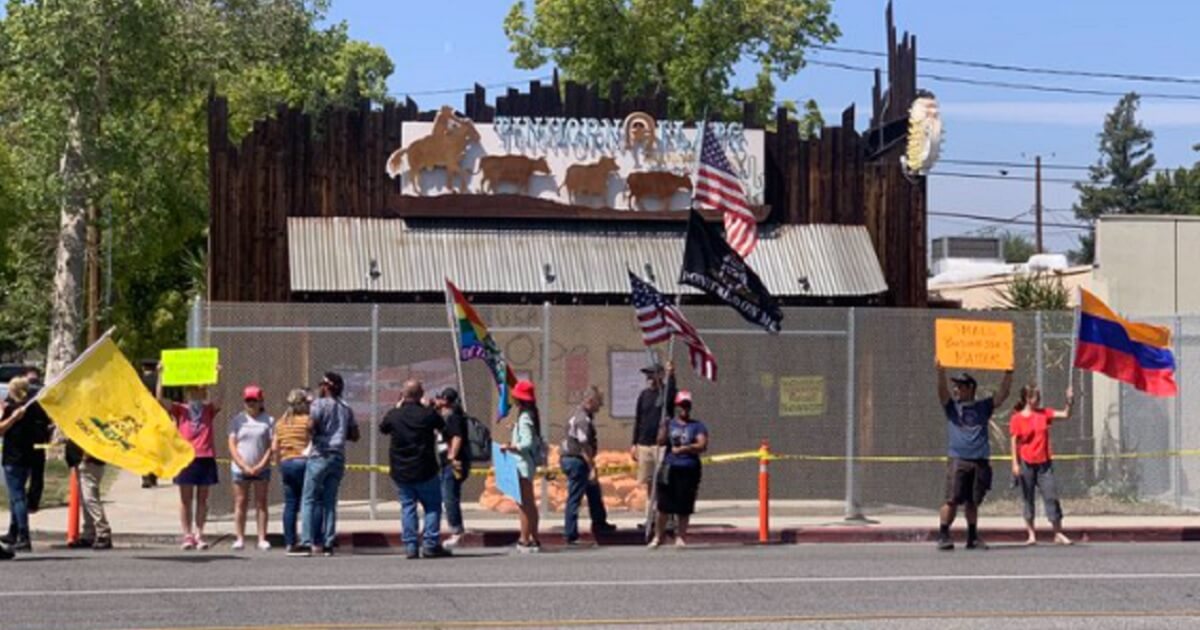 Tinhorn Flats Saloon & Grill is making headlines once again for its defiance of coronavirus restrictions.

The Burbank, California, restaurant had a fence placed around it on Saturday by the city after numerous actions taken to stop its operation had failed.

Tinhorn Flats currently has $50,000 in fines against it for continuing indoor dininng when it was banned, the Los Angeles Times reported.

The owner is standing firm against the local government, as he believes that the actions are baseless.

“Show me one shred of evidence how I am endangering the public,”  Baret Lepejian told the Times.

From earlier today: Lucas Lepejian, 20, saws off the padlock to Tinhorn Flats, with a small crowd cheering him on. He later tells me that the decision to do so was made by him, his sister and his father (the owner).@BurbankLeader #burbank #tinhornflats pic.twitter.com/RgAFdkajjz

His son, Lucas Lepejian, was arrested for trying to remove sandbags that had been placed as a physical barrier to prevent patrons from entering.

The reaction from the city of Burbank seems to be blown out of proportion, as customers are ultimately the ones making the decision.

And the restaurant clearly has some support.

A couple dozen people sat on the patio, chanting “Tinhorn Flats” and “USA.” I do want to note that outdoor dining (and indoor dining) are currently open in L.A. County – it is this bar specifically that has been shut down. pic.twitter.com/Gtq0CoiuIK

Burbank is apparently trying to make an example out of the restaurant as a way to stop other businesses from going against protocols, but it comes across as counterintuitive and medieval.

By going as far as to put up a barricade, which ended up making news, it makes Burbank look like the perpetrator, not the other way around.

Many have rallied outside of the restaurant in support, only drawing more negative attention to the city and lockdowns in general.

In Los Angeles County, indoor dining is now allowed at 50 percent capacity after months of closures.

California Gov. Newsom has set June 15 as a reopening date for the state, according to CBS, with a mask mandate presumably still in place, but the Tinhorn Flats Saloon & Grill still has fighting to do.

Analysis Reveals 1.2M Illegal Immigrants Projected to Be Apprehended at Southern Border in 2021