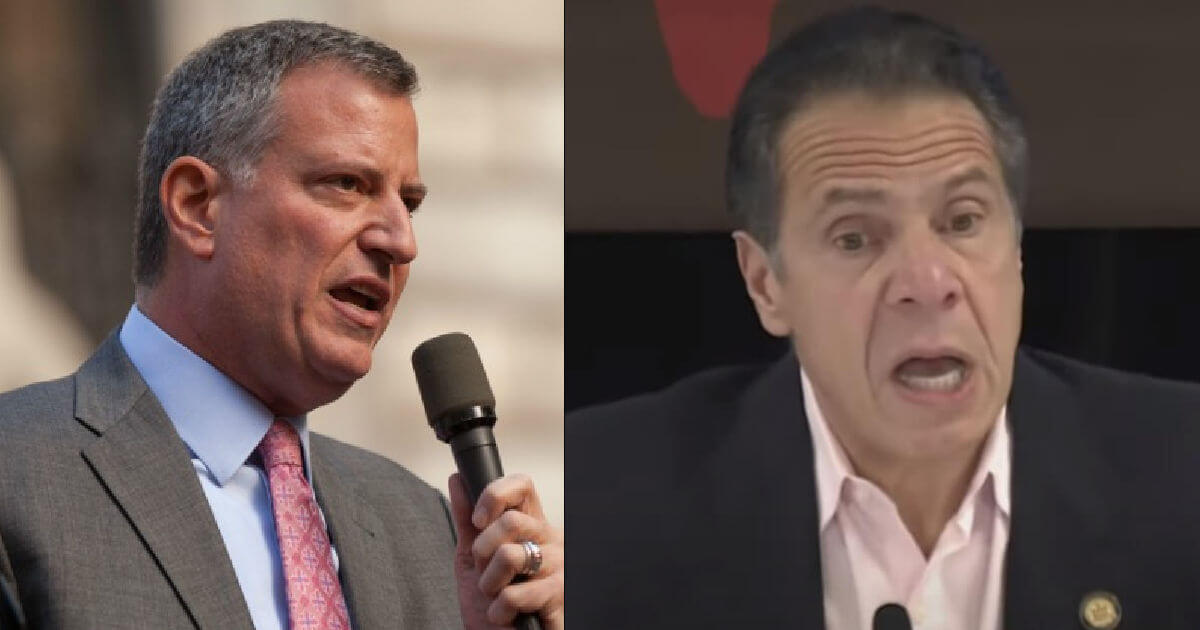 Uh oh, you know things are bad when the mayor of the largest city in your state, in the same political party and just as whacky, calls for your resignation.

According to the Washington Examiner, in a stunning, bombshell announcement on Thursday, just hours ago, New York City Mayor Bill de Blasio called on Gov. Andrew Cuomo to resign in the wake of six accusers coming out against him with sexual harassment charges. The latest accuser, who has yet to be named, accused the governor of “sexual assault.”

“It’s deeply troubling,” de Blasio said during a Thursday morning press briefing. “The specific allegation that the governor called an employee of his, someone who he had power over, called them to a private place and then sexually assaulted her is absolutely unacceptable to me.”

“It is disgusting to me, and he can no longer serve as governor,” the mayor added.

De Blasio had been hard on Cuomo prior to that statement, but until today, hadn’t directly called on Cuomo to officially resign before any of the investigations into the multiple claims were completed.

Not only did de Blasio suggest Cuomo should resign immediately, but he was joined by approximately 60 other New York Democrats who offered the same message.

“In light of allegations concerning the Governor over the last several weeks, I will be meeting with members in conference today on potential paths forward,” Assembly Speaker Carl Heastie said.

Cuomo, now on several occasions, has insisted that he is not even considering resignation as a remote option, saying that residents of the state — and America — should wait for the results of the investigation to come out before making those judgments.

And, let’s be honest, if it were one — maybe two — women involved, then I think most people would buy that. But it’s six. And now one of them is claiming the next level of egregious behavior — sexual assault.

In the most recent allegation, the report stated that “said she and Cuomo were alone on the second floor of the governor’s private residence when he stuck his hand under her blouse and fondled her, according to a report from the Times Union. The female staffer, who was not identified by name, pointed to other alleged incidents where the governor exhibited similar behavior.”

This guy is toast.

I hate to always bring up the “if this were a Republican” card, but it remains true. A Republican governor would have been forced out of office within week one, after one or two allegations. Hollywood, the Democratic party and the left-leaning mainstream media would have pounced like starving tigers.

Cuomo has received somewhat of a break, but that’s all quickly coming to an end.

My prediction? Cuomo won’t be the governor by next week. We’ll see.