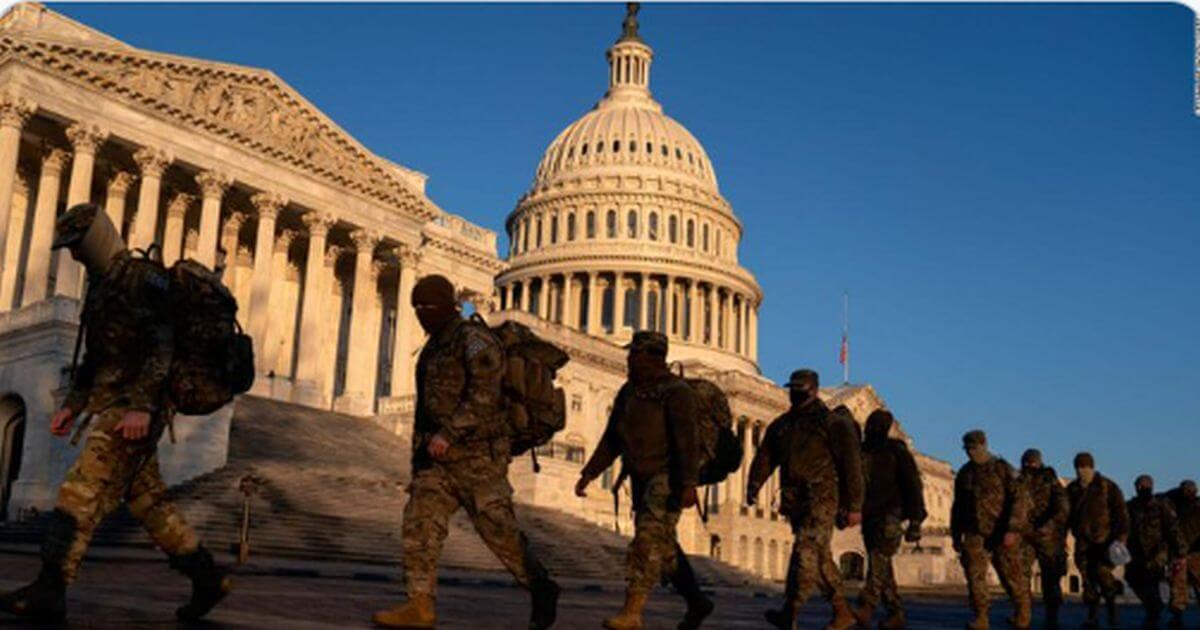 This is becoming quite ridiculous.

Not since Jan. 6 has there been any need for National Guard troops in Washington D.C. All of the “credible” threats reported for President Joe Biden’s inauguration all failed to come to fruition.

On top of that, these fine men and women serving our country have been stripped away from their families and jobs to do what? Sleep in parking garages and eat under-cooked food filled with metal shavings?

Yet, certain officials in D.C. believe that thousands of troops need to stick around for several additional months. It’s a total joke.

TRENDING: AZ Gov: Biden Does It Again, Nukes 1,500 Jobs That Would Have Paid $150 Million Per Year

The Capitol Police have asked the Pentagon to extend the National Guard’s mission to protect the U.S. Capitol for an additional two months, a defense official told Reuters on Thursday.

National Guard troops were dispatched to the Capitol grounds after the Jan. 6 attack by supporters of former President Donald Trump, and tall fencing has been erected to extend the security perimeter.

There are currently about 5,200 National Guard troops around the building. The mission was set to end on March 12.

“We should have them here as long as they are needed,” House of Representatives Speaker Nancy Pelosi told reporters at her weekly press conference.

She did not provide details but said Congress will have to review them and make decisions “about what is feasible.” Congress would have to approve emergency funding to implement such plans, she said.

The defense official, who was speaking on the condition of anonymity, said the Capitol Police’s request had been received by the Pentagon and would be examined, and said it was highly likely that it would be approved.

Federal prosecutors have charged more than 300 people for involvement in the Jan. 6 attack that led to five deaths, including a policeman. Those arrested include members of armed militia groups such as the Oath Keepers and the Three Percenters.

Security around the Capitol was tight on Thursday after police warned that a militia group might try to attack it to mark a key date on the calendar of the baseless QAnon conspiracy theory.

A bulletin issued on Tuesday by the Department of Homeland Security and the Federal Bureau of Investigation said an unidentified group of “militia violent extremists” discussed plans in February to “take control of the U.S. Capitol and remove Democratic lawmakers on or about March 4.”

March 4 is the day when QAnon adherents believe that Trump, who was defeated by President Joe Biden in the Nov. 3 election, will be sworn in for a second term in office. Up until 1933, March 4 was the date of the inauguration.

The Capitol Police, a force of about 2,300 officers and civilian employees, is responsible for protecting the Capitol grounds, lawmakers, visitors and those working there. The National Guard in Washington, D.C., is under the control of the Pentagon, an unusual arrangement as the 50 states have authority over their own National Guard.

Washington’s Metropolitan Police Department, which also responded to the insurrection on Jan. 6, is under the control of the city government.

Congresswoman Elissa Slotkin said that she had heard about a 60-day extension request and that the National Guard was asking states for troop contributions.

“No one likes seeing the fortress-like security around the Capitol. And no one wants to again have a security problem in and around this symbolic place,” Slotkin said on Twitter.

Hopefully, Congressional Republicans can somehow intervene and end this charade because that’s all it is. It’s an optics moment for Democrats that has backfired multiple times and will likely continue to do so.

Democrat Sheila Jackson Lee Pushes for the 40,000 People Outside of Capitol Siege to Be Investigated