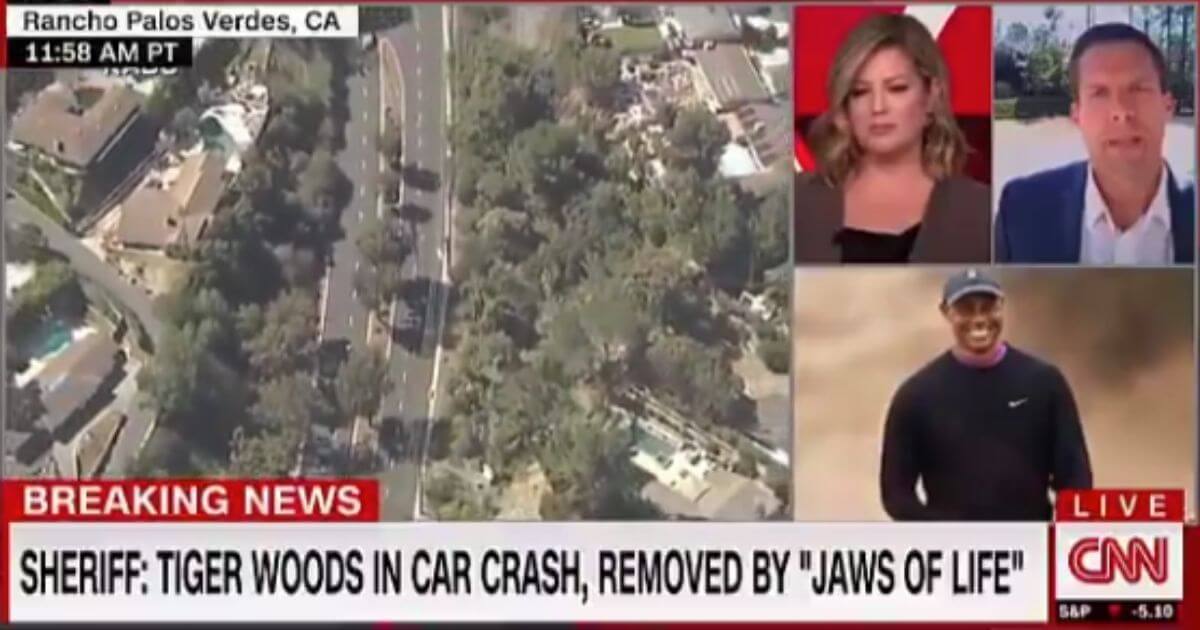 A CNN host has been slammed for “irresponsible journalism” after comments he made in the aftermath of Tuesday’s rollover accident in which golfer Tiger Woods suffered serious injuries.

Andy Scholes was asked during a segment on the accident for his reaction.

“Stunned I guess, but not entirely surprised by, you know, what we’re seeing here,” Scholes said.

“Tiger, back in 2017, was found by police, pulled over the side of the road, you know, asleep in his car. He had said he had taken a lot of painkillers at that time. Because, we all know, Tiger’s undergone a lot of surgeries over the years and painkillers have become a part of his life,” he said.

CNN Sports anchor says he wasn’t surprised by Tiger’s car crash because ‘painkillers have become a part of his life’ https://t.co/2RtxpUBTBm pic.twitter.com/An4QpDMDEM

The incident to which Scholes referred took place in Jupiter, Florida, when Woods blamed an “unexpected reaction to prescribed medications” for being found asleep in his car.

The Los Angeles County Sherriff’s Department said Tuesday said there was no evidence Woods was impaired.

LA County Sheriff Alex Villanueva said Woods was traveling at a “relatively greater speed than normal” in an area that “has a high frequency of accidents.”

Woods was “lucky to be alive,” Villanueva said, according to the Los Angeles Times.

Scholes, meanwhile, was being raked over the coals for judging Woods without all the facts.

“This is just irresponsible journalism,” tweeted Hemal Jhaveri, an editor for USA Today Sports. “We don’t know anything yet. CNN needs to get some real sports reporters.”

This is just irresponsible journalism. We don’t know anything yet. CNN needs to get some real sports reporters. https://t.co/0NVx9FKK7v

Speculation by reporter Andy Scholes on the reason for the crash by Tiger Woods is unprofessional and he should be reprimanded.

@AndyScholesCNN I think it was completely insensitive that at the breaking news about Tigers accident the first thing you brought up were his past injuries,pain killers and alcohol. It was disgusting.

If @AndyScholesCNN was a Fox Sports person and said this on Fox News Channel, CNN’s Brianna Keilar and her colleagues would be losing their minds. You wouldn’t hear the end of this https://t.co/SbXDkV9IBm

@AndyScholesCNN can you not at least give him the benefit of the doubt that he’s turned his life around and not on pain killers. But instead it is the first thing you bring up and say you aren’t shocked about his accident because of his past use of them pic.twitter.com/E8cFc70VEX

@AndyScholesCNN Your commentary on @TigerWoods today was disrespectful.

“Sorry didn’t mean for it to come out that way,” Scholes replied to more than a dozen critical tweets.

A Twitter statement updated fans on the golfer’s progress.

The statement said that during “a long surgical procedure” on his lower right leg and ankle, a rod was inserted into Woods’ leg. Screws were placed in his foot and ankle.

LA County sheriff’s Deputy Carlos Gonzalez said Woods “was not able to stand under his own power” when the deputy arrived on the scene.

“I spoke to him. I asked him what his name was. He told me his name was Tiger, and at that moment, I immediately recognized him,” Gonzalez said.

Laureen Swing, who lives near the crash site, said the place Woods crashed is dangerous.

“There’s accidents all the time,” she told the Times. “I think it’s almost a dangerous stretch of road, and I always stay on the right side because I’m just afraid of people wanting to go fast.”

“They don’t use turn signals sometimes when they switch lanes. I’ve almost found myself getting into an accident, trying to avoid another car cutting me off on that road. It’s pretty dangerous.”