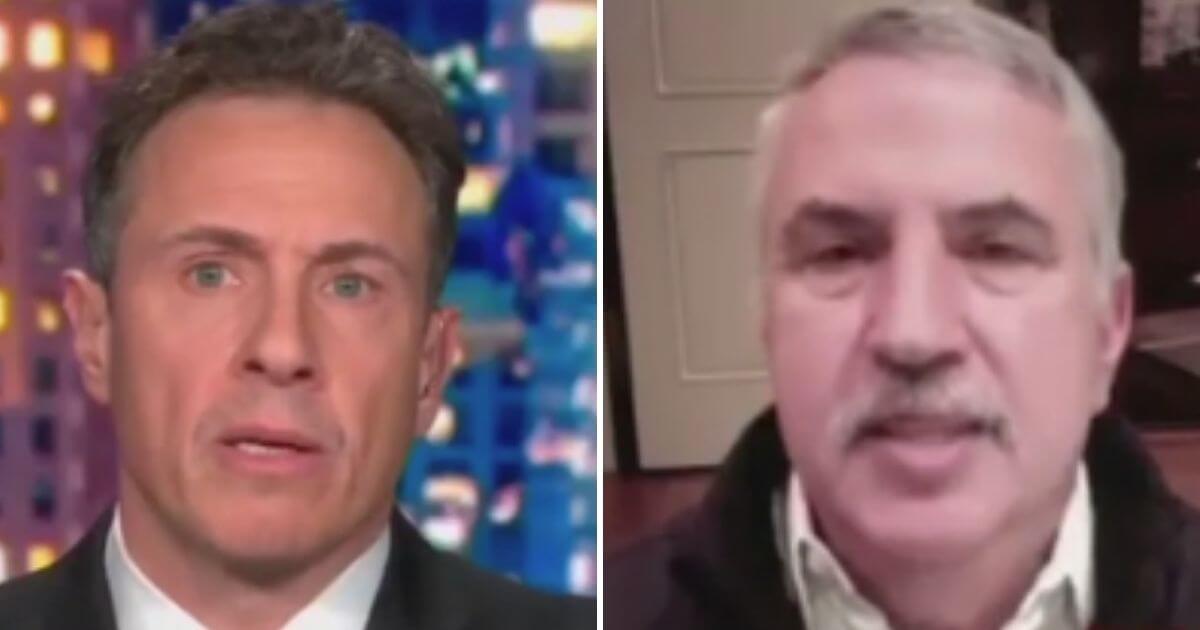 CNN host Chris Cuomo and a columnist for The New York Times discussed the political landscape in the country Monday night. The conclusion, according to Times columnist Tom Friedman — and one that Cuomo appeared to implicitly endorse — was that the Republican Party as currently constituted must be killed off.

In what has to be one of the least unifying segments we’ve seen thus far on a prime-time cable TV news program amid the country’s unprecedented state of division, Cuomo started by introducing Friedman, noting that the columnist had assessed that the country cannot survive unless one of its two major political parties dies, NewsBusters reported.

“My next guest says for America to live, this party has to die. Let’s bring in New York Times columnist Tom Friedman,” Cuomo said, welcoming the establishment media “journalist” onto the show.

“Of course, just using the word ‘die’ will have the whole righty fringe throwing you under the bus as the real person asking for violence,” Cuomo quipped.

Cuomo then directed his negative energy toward Senate Minority Leader Mitch McConnell, who might be the least popular person in Washington at the moment.

“Two have-you-evers, and what do they mean?” he asked Freidman. “The first have-you-ever: Have you ever seen somebody make a political move the way McConnell did in voting to acquit and then following it up with the exact rationale as for why he should have convicted?”

The question was of course in reference to McConnell’s decision to vote not to convict former President Donald Trump at the conclusion of last week’s Senate impeachment trial. McConnell then immediately attacked Trump, saying that the former president was “practically and morally responsible” for the Jan. 6 incursion at the U.S. Capitol.

“Well, Chris, I think everyone has pretty well covered the fact that the hypocrisy of Mitch McConnell was as big as all outdoors,” Friedman said of McConnell, concluding the portion of the conversation where either man said anything with a semblance of lucidity.

While Cuomo concluded that the senator has “no shame,” the duo quickly pivoted to attacking Trump and Trump supporters — and indeed the entire Republican Party.

Friedman concluded that “from the very beginning, we’ve had a president without shame, backed by a party without spine, amplified by a network without integrity. That’s been the problem.”

“What I’m really focused on right now, and what is the important question, is will this party split in a way that 10 to 15 percent are hived off so the Trump Rump Party is unable to win a national election, to retake the House, to retake the Senate, let alone retake the presidency?” he said. “That’s what I think is the most important question before the country. Because this party has proven it is not a governing party.”

Friedman, who has unmasked himself as a statist, is of course wrong on all counts.

During the 2020 election, Trump received more votes than any sitting president in the history of either party. Additionally, not a single GOP House incumbent lost a race, while Republicans flipped a total of 15 seats. The statistical analysis website FiveThirtyEight is even predicting what seems obvious: Republicans “are on track” to retake the House in 2022.

Not much of a referendum there, but a guy can hope. And Friedman is full of hope.

Friedman continued gazing into his crystal ball, and explaining, despite the data, why the GOP is dead or should be killed.

“It’s not a governing party in two ways. One, it puts its leader — its cult leader — ahead of the Constitution. And second, going back to the campaign, it had a convention in which it had no platform,” he said. “It had no platform. You have to stop and think about that. Trump, all he talked about was how much he wanted to get back into power, but he never really said why.”

No platform? Friedman had apparently forgotten that the most memorable moment of the Democrats’ convention was when a man in women’s clothing sang a rendition of a hippie protest song.

In any event, the statist and the enabling CNN host continued a post-mortem on a party and movement that, to their chagrin, is alive and well — even if it’s finding its footing.

He concluded that the “most important thing for the country right now is that this version of the Republican Party, led by Donald Trump, not be able to get back in power again until the party transforms itself.”

“It cannot be allowed back in power again,” he said.

Trump was impeached partially for using the common political phrase “fight like hell,” and yet Friedman, with Cuomo’s implicit backing, effectively called for the death of one of the country’s major parties. If that’s not incendiary rhetoric in a political tinderbox, then no such thing exists.

The Friedman and Cuomos of the world can hope, pray and meditate for the death of the conservative movement on every segment, every night on CNN. It’s not going to happen.

Republicans are likely to emerge in 2022 with a House victory, and probably control of the Senate as well — denying Friedman and Cuomo the one-party state they so desire.

Pandemic Led to Surprising Changes in U.S. Consumer Habits in 2020