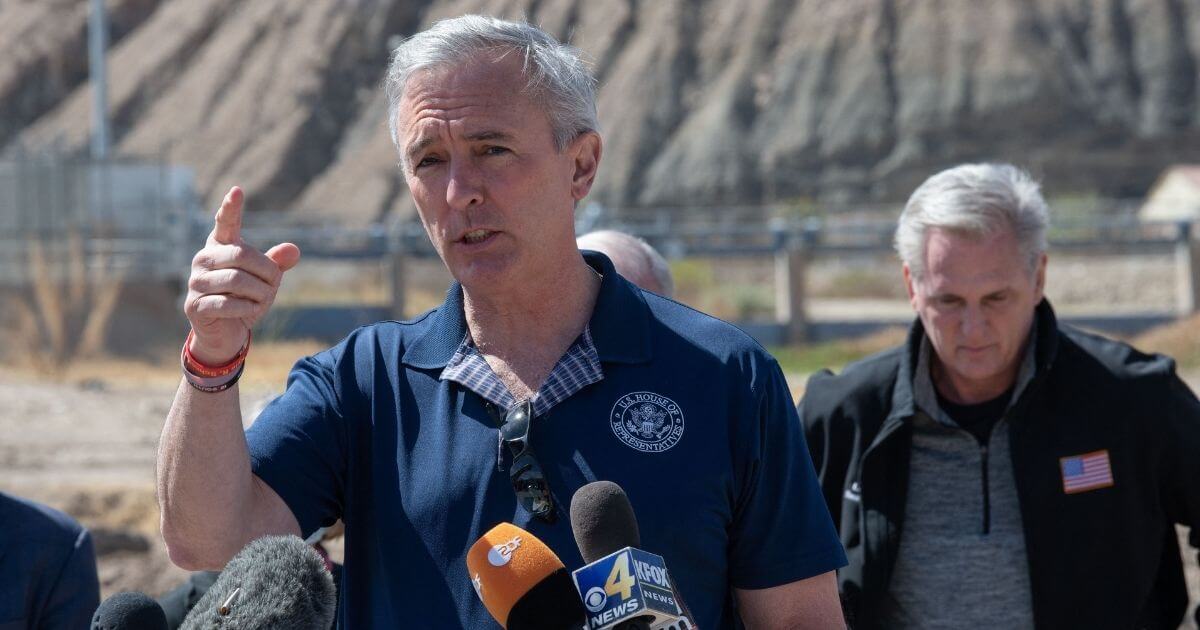 Suspected terrorists are crossing the southern border amid the glut of illegal immigrants slipping into the United States, according to lawmakers who toured the border Monday.

“Individuals that they have on the watchlist for terrorism are now starting to exploit the southern border,” Republican Rep. John Katko of New York said during a news conference in El Paso, Texas, with the GOP delegation. “We need to wake up.”

Katko said Border Patrol agents told him about the problem.

“We went up to what they call ‘Monument 3,’ which is the intersection of Texas, New Mexico and Mexico. When I was standing there, looking out, I was talking to one of the agents, and he said the night before, 100 people came across and he said some of them are on ‘the list.’ I said, what list? He said, ‘the terror watch list,’ and that really sent my antenna up. It’s not just people coming from Honduras,” the congressman said, according to Fox News.

House Minority Leader Kevin McCarthy said he was told by Border Patrol agents that individuals from Iran, Yemen, Sri Lanka and China were among those trying to cross the border.

The California Republican called the situation “beyond a crisis,” according to The Washington Times.

McCarthy noted that at one facility lawmakers visited, 120 Border Patrol agents were inside caring for the flood of migrants who had tried to cross, which meant they were not patrolling the border.

Republican Texas Gov. Greg Abbott said in a statement Monday that his fears are not only terrorism but disease.

“Is the federal government tracking what countries these children are coming from and what COVID-19 variants they might have been exposed to? How long will these children be held in Texas? Are these children receiving COVID-19 tests, and how is the Biden Administration handling those who test positive?” he said.

“Texas is putting President Biden on notice that his policies are risking the health and safety of Texans and putting children at risk from cartels and human traffickers,” Abbott said.

McCarthy said he wrote President Joe Biden about the crisis but never got a response.

“I thought maybe he would reach out, maybe he’d set an appointment,” the minority leader said. “He doesn’t even acknowledge a letter, let alone a crisis that his policies created.”

Republican Sen. Lindsey Graham of South Carolina has said that the loss of border security that has accompanied the Biden administration means that the southern border has become a “great way for terrorists to come into our country.”

“People will be coming … by the hundreds of thousands by the summer. It is a humanitarian crisis, it’s going to be an economic crisis for our cities along the border, and eventually it’s going to be a national security crisis, because they’re children today but they could easily be terrorists tomorrow,” Graham said March 9 on Fox News’ “Hannity.”

The southern border has long been viewed as a potential gateway for terrorists.

“There are thousands of individuals on the terrorist watchlist that traveled through our Hemisphere last year alone, and we work very hard to keep these individuals from traveling on illicit pathways to our country,” the Trump administration’s Department of Homeland Security noted a January 2019 fact sheet.

“The threat is real. The number of terror-watchlisted individuals encountered at our Southern Border has increased over the last two years. The exact number is sensitive and details about these cases are extremely sensitive,” the fact sheet said.

"I wasn't suggesting people should not eat."...California Gov Gets Snarky Over Dinner Party Scandal During Lockdown [Video]