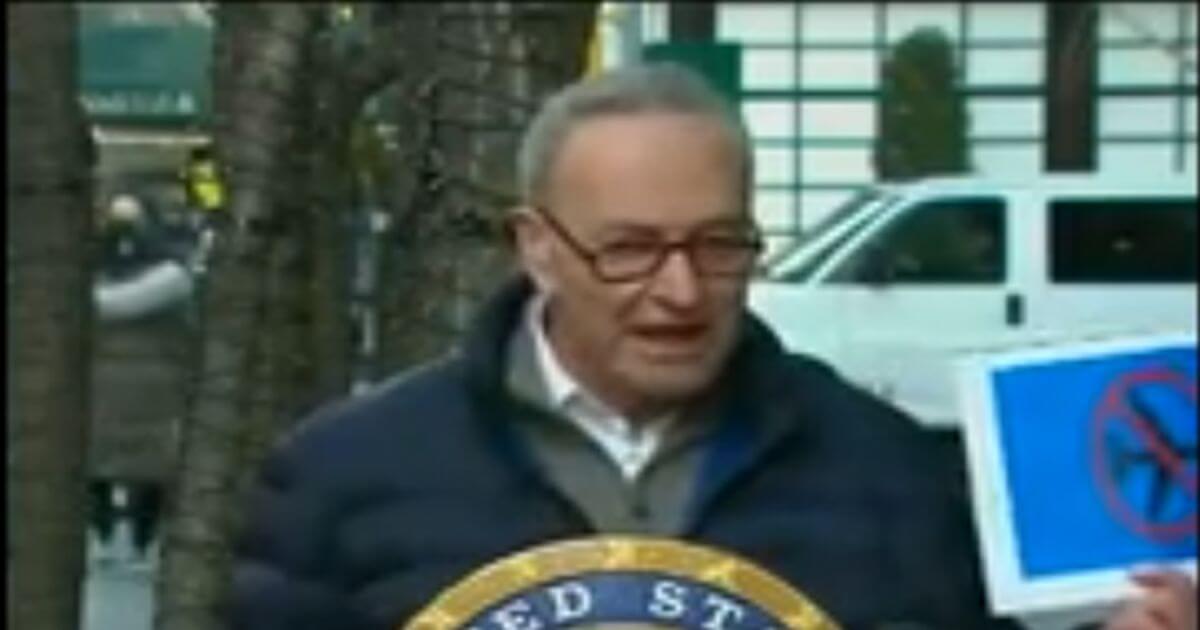 If there’s one way to make sure COVID-19 deaths don’t go down, this is it.

New York Democratic Rep. Alexandria Ocasio-Cortez and Senate Majority Leader Chuck Schumer joined forces this week to publicize a federal program that will reimburse the families of coronavirus victims up to $7,000 for funeral expenses for deaths from the disease that occurred in 2020 — even if the death involved an illegal alien.

And, according to CNN, Schumer said the lawmakers want the program to last as long as the pandemic does — which means the numbers are likely to show the pandemic lasting a good long time.

According to the New York Post, the program Schumer and Ocasio-Cortez introduced at a joint news conference in New York on Monday is part of the COVID relief measure signed into law in December by then-President Donald Trump.

Under the bill, $2 billion will go to the Federal Emergency Management Agency for COVID-19 funeral expenses, according to the Post, with about $200,000 million going to New York, the hardest-hit area of the country.

“Families also are having to deal with having to pay for the storage of the bodies of their own loved ones. This is wrong.”

AOC and Chuck Schumer announced FEMA has allocated $2 billion to reimburse low-income families in New York up to $7,000 for Covid funeral and burial costs pic.twitter.com/x3aaw6u63R

Details about the program are still sketchy, as CNET reported Tuesday. How potential recipients will be determined, whether income limits will be involved, or even how families can apply for the money has yet to be worked out.

“FEMA is working quickly to finalize an implementation plan and interim policy to support the delivery of funeral assistance to eligible citizens,” a FEMA representative wrote in an email, CNET reported.

But one thing Ocasio-Cortez made clear is that illegal aliens should have no worries about getting in line for the money.

Asked at Monday’s news conference directly whether the “undocumented” are eligible, Ocasio-Cortez said yes, according to CNN.

“I think it’s completely understandable why there’s that fear there especially over the last four years of targeting of our immigrant families,” she said. “But I think right now our families, especially under a Biden administration, a Democratic Senate and a Democratic House, that is prioritizing immigrant rights, including those who are undocumented, to not have fear, and to not allow that fear to further marginalize our community.”

With the Biden administration already taking steps to destroy the semblance of order on the country’s illegal immigration situation that former President Trump managed to impose, the U.S. is only going to grow more attractive as a destination for millions who couldn’t be bothered with the niceties of American immigration law.

That means American citizens already bearing the social costs of illegal immigration in terms of schools, police protection, health care and jails could be on the hook for illegal aliens’ coronavirus-related funerals too.

As of Tuesday, according to the Johns Hopkins Coronavirus Resource Center, the U.S. had recorded more than 467,000 deaths attributed to the coronavirus.

And at the risk of sounding crass, with a federal program doling out dollars to pay for deaths like that, there’s not likely to be any shortage of them in the future.

Americans who paid attention to the news will remember that last year was full of stories about deaths being attributed to COVID-19 with questionable cause.

In far too many cases, if a death involved an individual who’d tested positive for the coronavirus, the death was counted as a COVID-19 fatality even if the actual cause was bullet in the head (much more fatal than the coronavirus), Parkinson’s disease or a motorcycle accident.

If federal funding for coronavirus funerals is renewed for 2021, it’s a rock-solid bet — human nature being what it is — that the number of questionable cases where COVID-19 is listed as the cause of death is only going to go up.

(Democrats might not understand free markets, but they have to know subsidizing any activity is going to make it increase. There’s no reason that wouldn’t include COVID-19 funerals.)

It’s not the first time the government has pitched in with funeral assistance, of course. As CNET reported, the Federal Emergency Management Agency can already provide funeral assistance in federally declared emergencies.

But the coronavirus pandemic isn’t a discrete event like a hurricane, flood or wildfire. It’s an ongoing condition that, even with vaccinations available, is likely to be part of the country’s life for the foreseeable future. And with new coronavirus variants already forming, there’s no guarantee the vaccinations now on the market will be effective forever.

If the federal government does end up prolonging the COVID-19 funeral payment program into a new year, or even until the “end” of the pandemic — whenever that might be or however it might be defined — both the pandemic and the program could well be with us for the life of the country itself.

(Which raises the question of why the government doesn’t simply pay for funerals for every other fatal disease? Or every other cause of death for that matter?)

As conservative economist Milton Friedman famously wrote: “Nothing is so permanent as a temporary government program.”

If the federal government is going to be paying for the funerals, don’t expect “COVID-19” deaths to be going anywhere anytime soon.