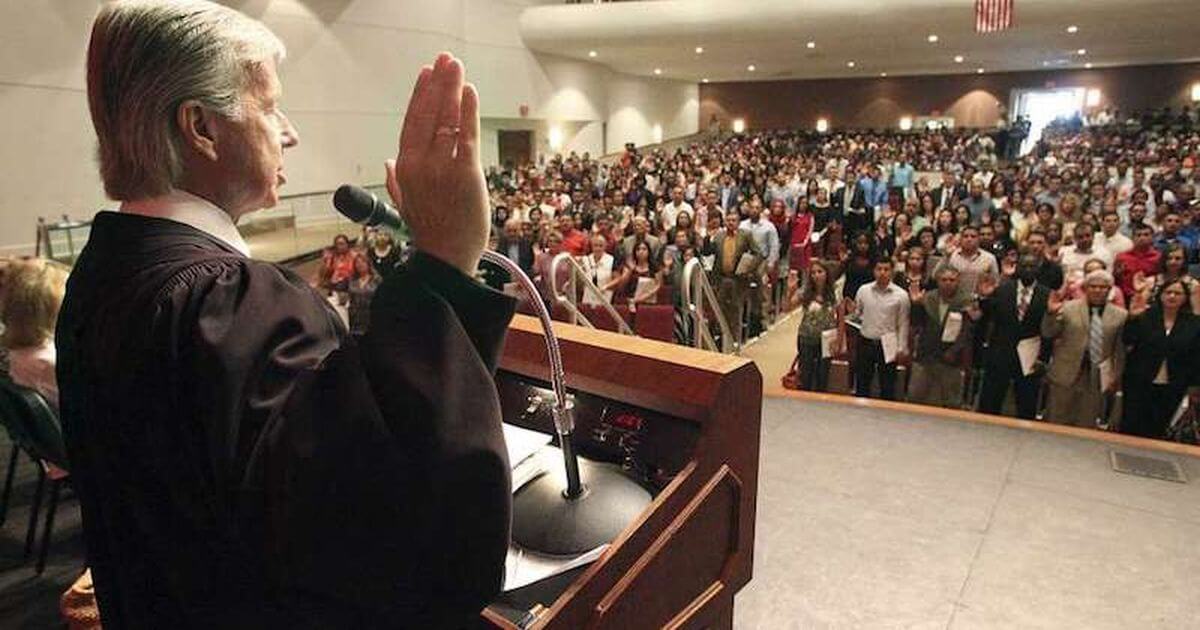 When President Joe Biden issued a blizzard of executive orders to kick off his term, one was allegedly aimed specifically at “Restoring Faith in Our Legal Immigration Systems.”

And that apparently means making the American citizenship test easier, too.

In a news release Monday, Citizenship and Immigration Services — the largest law-enforcement arm of the Department of Homeland Security — announced that it is dropping the citizenship test implemented in 2020 in favor of a version of the test that was first put into place in 2008, the final year of the George W. Bush presidency.

The reason, according to the CIS news release, was that the 2020 version of the test “may inadvertently create potential barriers to the naturalization process.”

That sounds more or less like what a citizenship test is supposed to do — create “barriers” for those who maybe don’t have enough interest in becoming a citizen of the country that they are willing to study enough to get down some of the basic — very, very basic — facts about how that country operates.

According to The Washington Times, the Trump version of the test covered 128 questions for potential citizens to study. On the day of the test, they would be asked 20 questions from that group. To pass, they would have to get 60 percent of them — or 12 — correct.

Under the new/old version, the number of test questions to be studied is 100. The number asked on the day of the test is 10, and applicants need to get 60 percent — or six — correct.

“The 2008 civics test was thoroughly developed over a multi-year period with the input of more than 150 organizations, which included English as a second language experts, educators, and historians, and was piloted before its implementation,” the agency said. (Only the federal government brags about an accomplishment like using 150 organizations to come up with 100 questions — about anything.)

Do you think it should be easy to become a US citizen?

Even under the 2020 version, the questions are not exactly Federalist Papers dissertations from the genius of Alexander Hamilton.

They’re on the order of “What are two rights described in the Declaration of Independence”? and “We elect a U.S. senator for how many years?”

The answers are in multiple-choice format, so if you’re stumped and can’t quite remember Senate terms are six years, you will probably know they aren’t two, four or 10. (If you’re still stumped, you probably should be reading TMZ right now — or Vox.)

But again, it’s multiple-choice, so the applicant would be left with “The Press Secretary,” “The Chief Justice of the United States,” “The Speaker of the House,” and “The Senate Majority Leader.”

Since anyone with a functioning television and a functioning brain would rule out “press secretary,” it’s down to a choice of three. A blind guess could well turn up the speaker of the House. And remember, passing requires getting only 60 percent correct.

(Check out some sample questions here. It’s well worth the time to see what the fuss is about.)

A sampling of social media about the change turned up a lot of the predictable gripes about the test itself, along the lines of “Why have a test at all? Most Americans couldn’t pass it.”

This is a good example.

I feel strongly that any tests to be taken for citizenship should be what is required to graduate hs. If a citizen isn’t required to know it, a would-be citizen shouldn’t be required to learn it.

But that has it exactly wrong. If a would-be citizen is expected to know it, a natural-born citizen should have been required to learn it at some point growing up — maybe even from one of those unionized public school teachers Democrats are so fond of.

While it would be nice if every adult American was able to ace the test — in fact, it’s appalling that so many probably couldn’t — the reality is that native-born Americans have received their citizenship as a gift, from their parents and from their God.

Immigrants, on the other hand, have chosen to come to the United States. It’s not too much to ask an individual who seeks to become a full-fledged citizen of the greatest country the world has ever known to know the very basics about how it operates.

For the “progressive” elements of the Biden administration, though, apparently it is too much. Already, the current government has signaled a willingness to make the lives of illegal immigrants easier after they break American laws — which will only guarantee more and more of them.

Every House Democrat Signs On To Corrupt Election Reform Bill, HR-1, Republicans Denounce It As A 'Federal Government Takeover'