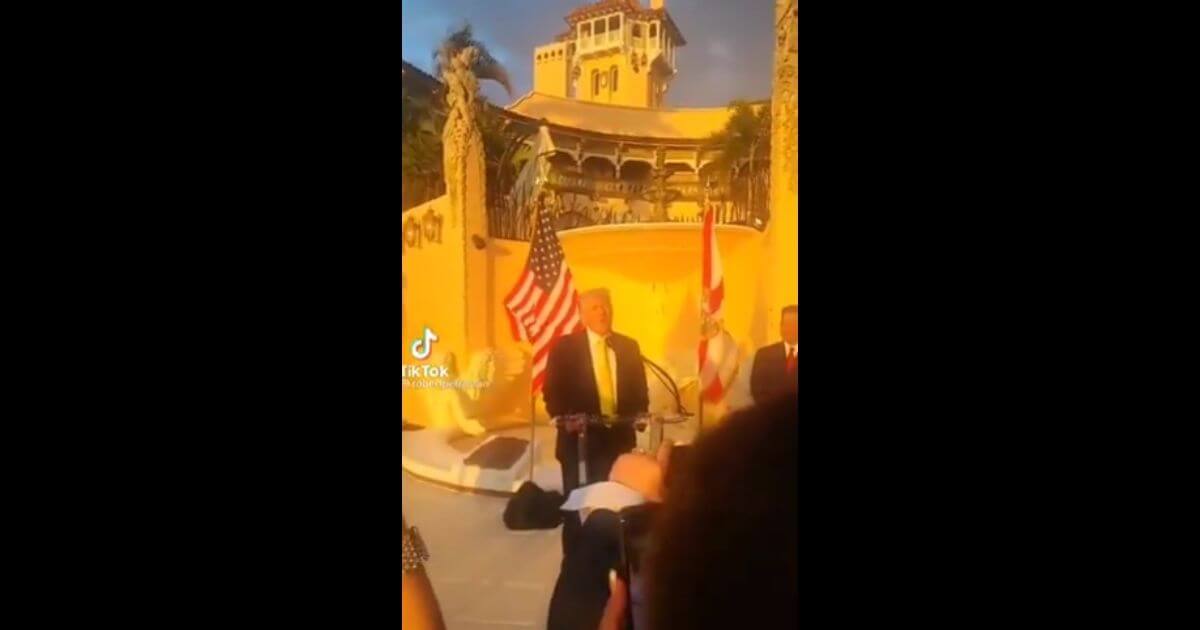 Former President Donald Trump added his mockery to that of his son in commenting about President Joe Biden’s mishap while boarding Air Force One on Friday.

As Biden went up the stairs to the presidential aircraft, he lost his footing.

I know folks have seen that President Biden slipped on his way up the stairs to AF1, but I’m happy to report that he is just fine and did not even require any attention from the medical team who travels with him. Nothing more than a misstep on the stairs.

The former president had his take on the incident in a comment shared on social media.

“I watch as Joe Biden went up the stairs today and I said ‘I didn’t lose to him,’ which we didn’t lose to him. Almost 75 million votes and probably a lot more than that,” Trump said, drawing a laugh from his audience.

Trump’s location in the video wasn’t identified, but as the Washington Examiner noted, he appeared to be at his Mar-a-Lago resort in Florida.

Trump’s son, Donald Trump Jr., on Friday, shared a video that made fun of the incident by doctoring a video of the former president hitting a golf ball that then hit Biden, knocking him down. When criticized, he responded with sarcasm.

I’m really looking forward to all the tele-physicians who attacked Trump getting on TV and discussing how Biden’s loss of balance and constant loss of train of thought is a serious symptom of neurological deficiency and dementia…. because it is.

Wait you’re telling me this is edited???
I’m sorry, I had no idea I was spreading this kind of gross disinformation. https://t.co/ulLZTLtciK pic.twitter.com/8k6hlQ2UXe

Others also weighed in on the incident.

It’s difficult to fall 3 times while going up a flight of steps.
Managing to make your left shoulder blade hit the carpet in the process is rarely accomplished—even in a game of Twister.
Biden has dementia but let’s wait for CNN to tell us this is just another adorable gaffe! https://t.co/lPqqAkECfj

Donald Trump holding a glass of water and walking slowly down a ramp was evidence that he wasn’t well. Interesting to see how same media will cover Joe Biden’s fall here. pic.twitter.com/XEa4r4OpeC

Trump last month seethed defiance when he spoke to the Conservative Political Action Conference about the election.

“Actually, as you know, they just lost the White House, but it’s one of those. But who knows, who knows? I may even decide to beat them for a third time, OK?” he said then.

“This issue is being studied and examined, but the reality is you cannot have a situation where ballots are indiscriminately pouring in from all over the country, tens of millions of ballots, where are they coming from? They’re coming all over the place — where illegal aliens and dead people are voting, and many other horrible things are happening that are too voluminous to even mention. But people know. I mean it’s being studied and the level of dishonesty is not to be believed.

“I mean, it’s being studied, and the level of dishonesty is not to be believed. We have a very sick and corrupt electoral process that must be fixed immediately. This election was rigged, and the Supreme Court and other courts didn’t want to do anything about it.”