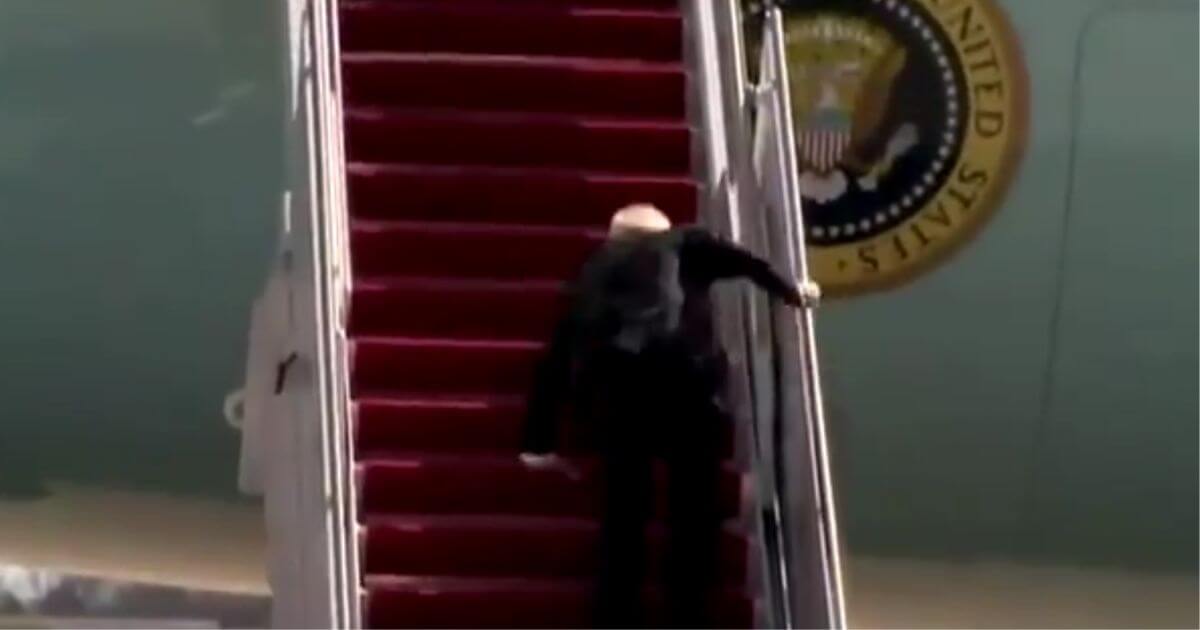 President Joe Biden’s multiple stumbles walking up the steps to Air Force One on Friday drew comparisons to the coverage former President Donald Trump received when he walked slowly down a ramp at West Point’s graduation last summer.

NewsBusters managing editor Curtis Houck shared a video of Biden himself making fun of Trump at the time.

“Look at how he steps and look at how I step. Watch how I run up ramps and he stumbles down ramps. Come on,” Biden said.

FLASHBACK -> Biden mocks Trump’s ramp walk at West Point and claims he’s stronger: “Look at how he steps and look at how I step. Watch how I run up ramps and he stumbles down ramps. Come on.” pic.twitter.com/U7CL0dBSQA

Let’s look at how Biden runs up steps.

Three trips in a row. Wow.

Here is Trump walking down the ramp at West Point on June 13. The former president explained afterward that he struggled with it because the ramp was metal and his shoes were leather.

The 45th president tweeted later that day, “The ramp that I descended after my West Point Commencement speech was very long & steep, had no handrail and, most importantly, was very slippery.”

“The last thing I was going to do is ‘fall’ for the Fake News to have fun with. Final ten feet I ran down to level ground. Momentum!”

Radio talk show host Jason Rantz shared some of the establishment media headlines from that day from outlets like The New York Times, The Washington Post, The Hill and CNN — with some speculating what Trump’s slow walk down the ramp meant in terms of his health.

WaPo: “Trump tries to explain his slow and unsteady walk down a ramp at West Point”

The Times‘ piece by Maggie Haberman noted in its sub-headline that Trump at 74 was “the oldest a president has been in his first term.”

By the way, Biden — the then-presumptive Democratic nominee — was 77 at the time and is now 78 years old.

CNN headlined, “Why the Donald Trump-West Point ramp story actually matters,” highlighting that the former president was in his mid-70s and also that his medical past was a “total mystery.”

Following all the media coverage and speculation about his health that the ramp walk generated, Trump offered a detailed response at a rally in Tulsa, Oklahoma, five days later.

He recounted that when he reached the top of the ramp to get off the stage, Trump turned to West Point Superintendent Lt. Gen. Darryl A. Williams saying he had a problem.

“I’m wearing leather-bottom shoes,” Trump said he told Williams. “There is no way I can make it down that ramp without falling on my a**, general.”

“So I said, ‘General, get ready ’cause I may grab you so fast, because I can’t fall with the fake news watching,’” Trump continued.

He told the Tulsa crowd, “I would have been better off if I fell and slid down the d*** ramp,” given the media coverage he received.

Trump further recalled he was surprised the West Point speech was trending on social media afterward, but learned on a phone call with first lady Melania Trump that it was because people were speculating whether he had Parkinson’s disease.

“I’ll let you know if there’s something wrong,” Trump reassured those at the rally.

“I tell you what — there’s something wrong with Biden, that I can tell you.”

The difference in media coverage between Biden’s trips walking up to Air Force One and Trump’s West Point slow ramp walk was perfectly typified by The Times‘ headline Friday: “Biden is ‘doing 100 percent fine’ after tripping while boarding Air Force One.”

CDC Changes The Rules Once Again