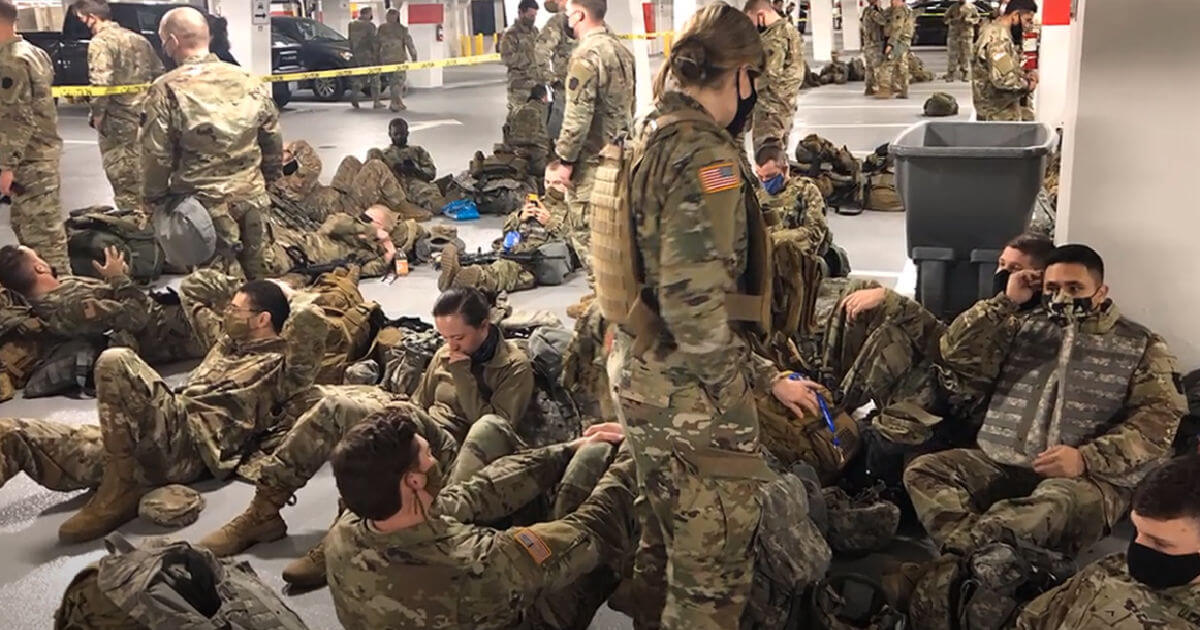 It’s a fair question to continue to ask why National Guard troops are still stationed in Washington D.C. after none of the previous “credible” threats ever came to fruition. If we’re all being honest, it’s an obvious power play by Democrats to make it appear as if they’re under constant threat of same kind of deranged people who stormed the Capitol on Jan. 6.

It’s all optics. Nothing more, nothing less. But it’s not fair to the fine men and women who are currently deployed there. Most of them haven’t a clue as to why in the world they’re still there, along with not knowing how much longer they have to be away from their “real” life.

Speaking of that, these are all part-time, volunteer soldiers who signed up to do what they’re told, however, they have lives. From accountants to doctors to small business owners — these fine soldiers have performed their duty and need to be returned home.

Making matters worse is an alarming report that emerged on Tuesday, according to Fox News, that dozens of Michigan National Guardsmen have had to be treated after eating under-cooked food and also food that was reportedly contaminated with metal flakes and other harmful debris.

This is an absolute outrage, to say the least. It’s bad enough being stuck in a parking garage for months on end, but now our own troops, on American soil, have to worry about falling ill from the food they’re being fed? I mean, it would be one thing if they were in some run-down area of the Middle East, but in America’s capital? Come on, we can do better than this.

“We understand that the decision was made to provide contracted meals to support the entire federal response stationed at the Capitol. However, it is clear that these contracted meals are poorly prepared, oftentimes inedible, and highly inadequate to support our soldiers,” a letter read from a group of Michigan lawmakers.

“It is completely unacceptable that our men and women serving in Washington D.C. are being hospitalized due to the food they are being provided,” the lawmakers added.

The bipartisan group of Michigan lawmakers, which included Reps. Bill Huizenga, Debbie Dingell, Tim Walberg, Brenda Lawrence, Jack Bergman, Haley Stevens, Fred Upton, Elissa Slotkin, John Moolenaar, Dan Kildee, Peter Meijer, Andy Levin, Lisa McClain and Rashida Tlaib, demanded that the contractor in charge of feeding those troops be replaced immediately and that the troops be given a per diem allowance to eat while the situation is resolved.

That’s the very least they can do for our troops, for God’s sake.

Many of the troops who have been interviewed have said they’re spending their own money for food that isn’t contaminated, which is absolutely horrendous that they would have to spend what little they’re earning on deployment on buying their own food.

Some of the troops who have even served on overseas deployment are stunned at the quality of the food their receiving right here at home.

“Morale is very bad,” the message said. “Many have served overseas and cannot believe the quality of food they are being fed here.”

This is unacceptable. And it needs to be addressed and whoever the morons are that run the company contracted to feed our troops needs to face charges or at the very least, be fired and publicly humiliated.

More than 1 in 16 Illegal Immigrants Have Covid but Are Released, Report Shows