Elise Stefanik Rebukes Pelosi, Accuses Nancy of Cover-Up: “It is unacceptable that one year later the American people still do not have answers as to why the Capitol was left so vulnerable and how to ensure it never happens again” 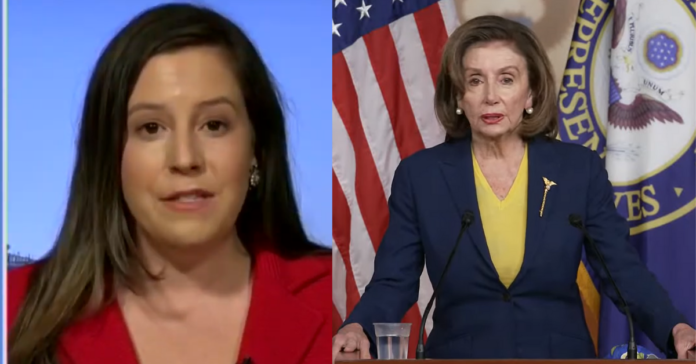 Rep. Elise Stefanik (R-NY) rebuked House Speaker Nancy Pelosi (D-CA) accusing the California Congresswoman of a cover-up as to why the Capitol was left so vulnerable on Jan 6. Elise said:

“On January 6, 2021, I strongly and clearly condemned the violence and destruction that occurred at the U.S. Capitol – just as I strongly condemned the entire year of violence and lawlessness that raged across our nation throughout 2020. Our nation owes a debt of gratitude to the U.S. Capitol Police for their bravery and heroism on that day and to those who sacrifice and serve in law enforcement every day across the country.

“It is unacceptable that one year later the American people still do not have answers as to why the Capitol was left so vulnerable and how to ensure it never happens again. Rather than focusing on improving the security of the Capitol and adopting all the recommendations from the U.S. Capitol Police, Nancy Pelosi and House Democrats are instead using their illegitimate partisan sham of a committee to shred Constitutional precedent and punish their political opponents. It is unprecedented, and it is dangerous.

“The American people deserve to know that the ONLY office that is off limits to this investigation is the Speaker’s office. The Speaker of the House oversees the Sergeant at Arms who, at her direction, has refused to turn over documents and communications related to January 6th. The fact is that Nancy Pelosi bears responsibility as Speaker of the House for leaving the Capitol so vulnerable despite multiple warnings and requests, and now she is responsible for the cover-up of that fact.

“As I stated on the House Floor as the Representative for New York’s 21st Congressional District, I believe that the most precious foundation and the most sacred covenant of our Republic is the right to vote and the faith in the security of our nation’s free and fair elections. I swore an oath to protect and defend the U.S. Constitution, and I stand by my objection to the electors of certain states based on the unconstitutional overreach by unelected state officials and judges ignoring state election laws.

“I am committed to working to strengthen our elections and rebuild that faith, so that our elections are free, fair, secure, safe, and most importantly, that they are according to the United States Constitution.”

“Madam Speaker, I rise with a heavy heart.

This has been a truly tragic day for America. And we all join together in fully condemning the dangerous violence and destruction that occurred today in our Nation’s Capitol.

Americans will always have the freedom of speech and the Constitutional right to protest, but violence in any form is absolutely unacceptable, it is anti-American, and must be prosecuted to the fullest extent of the law.

This hallowed temple of democracy is where generations of Americans have peacefully come together to face our nation’s greatest challenges, bridge our deepest fissures, and create a more perfect system of government. This is the appropriate place we stand to respectfully and peacefully give voice to the people we represent across our diverse country.

“The Representatives of the American people in this House are standing up for three fundamental American beliefs: the right to vote is sacred, that a representative has a duty to represent his or her constituents, and that the rule of law is a hallmark of our nation.”

And in the spirit of healing, those are not my words, those are the words of you, Madam Speaker. From this very same Chamber, when some of my colleagues and friends across the aisle objected to the 2005 electoral college certification.

Today’s discussion is about the Constitution. And it is about the American people. But it must also be about clearly and resolutely condemning the violence that occurred today.

I am honored each and every day to represent New York’s 21st Congressional District, and I believe it is my solemn and sacred duty to serve as their voice and their vote in the People’s House.

Tens of millions of Americans are concerned that the 2020 election featured unconstitutional overreach by unelected state officials and judges ignoring state election laws. We can and we should peacefully and respectfully discuss these concerns.