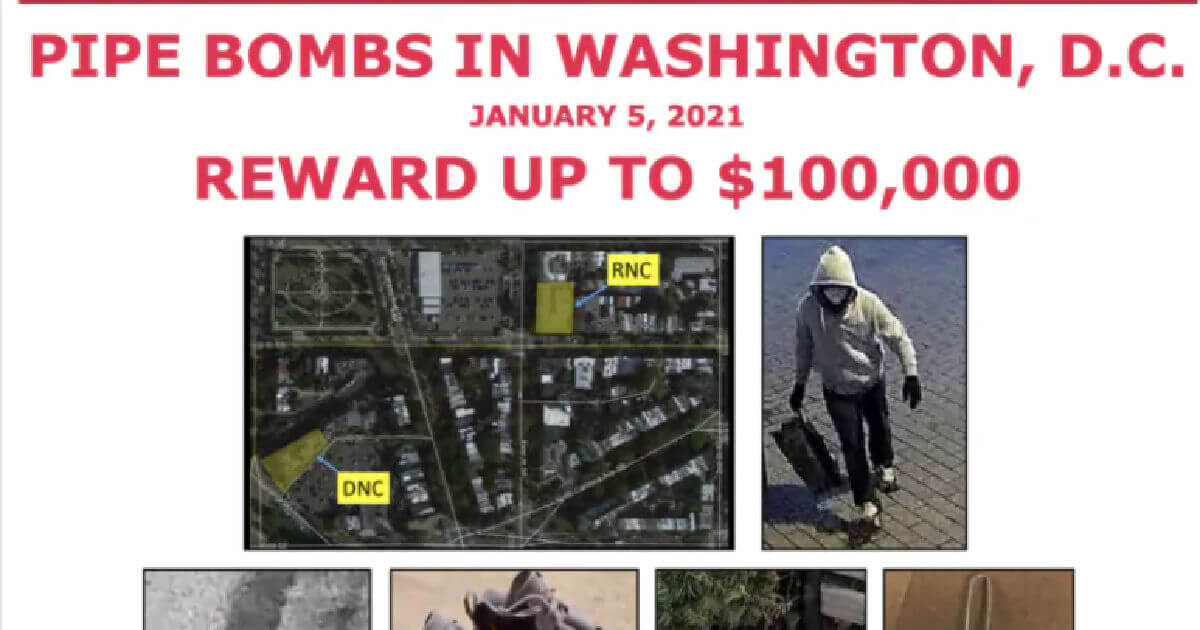 January 6, 2021, will go down in history as a tragic, unprecedented event in the nation’s capital that ultimately led to several deaths and multiple injuries as disillusioned Americans stormed the Capitol Building over the results of the 2020 presidential election.

While the main events of that day dominated every news cycle for weeks, what wasn’t covered to the degree that it should have been is the fact that several live and potentially catastrophically deadly pipe bombs were found at the Democratic National Committees headquarters and the RNC headquarters shortly before the Capitol rioting event kicked off.

The discovery of those bombs was shocking enough, but now the FBI’s latest report on the matter is raising even more eyebrows — apparently, the bombs were planted at the DNC and RNC the night before the day of the Capitol riots, according to Newsmax.

Federal agents were even able to uncover that the bombs were placed at the buildings between 7:30 p.m. and 8:30 p.m. on the night of January 5, but didn’t discover them until the next day.

Even more curious is the fact that federal law enforcement agents are still unclear whether or not the bombs were somehow tied to the event. In other words, were they supposed to be detonated on January 6 to coincide with the rioters storming the Capitol Building, or was it a completely separate, coincidental event given that Congress was meeting that day to formally certify the Electoral College votes for each state.

Given the close proximity of the two buildings in relation to the Capitol Building, it would be difficult to presume that the two events weren’t connected, somehow. But the larger question remains: Who planted them and why?

Both devices were similarly constructed in nature, being roughly 12 inches long and containing wires that led to some kind of timed detonator. Authorities have revealed that both devices contained an unknown power along with metal fragments, likely to maximize casualties after detonation.

The FBI issued photos of the bombs and adding to their desperation to find out who’s responsible, they’ve upped a reward for information leading to the person or persons behind the bombs to a staggering $100,000.

The FBI did say that they have “grainy” surveillance footage of at least one suspect, but couldn’t provide any further details other than they believe the suspect “wore a gray hooded sweatshirt, a face mask and Nike Air Max Speed Turf sneakers in yellow, black and gray, and had been carrying a backpack.”