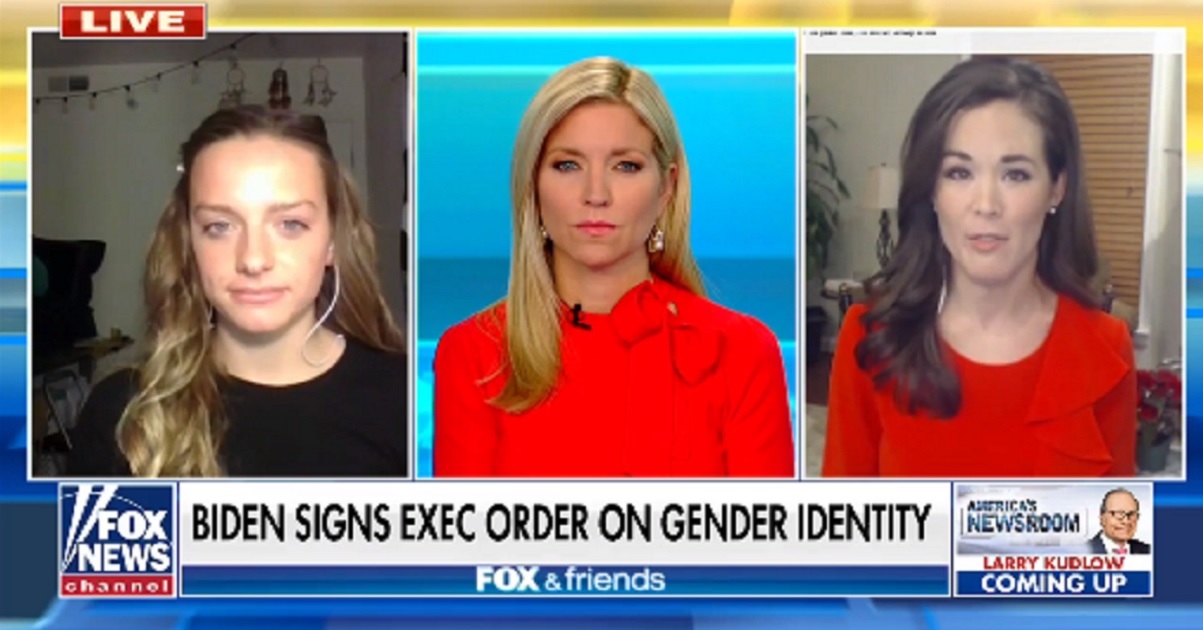 The Idaho State University student-athlete knows that women forced to compete against men in contests of strength and endurance are starting with a losing hand.

And since Joe Biden was sworn into the presidency on Jan. 20, she and countless other women have been shown that the full force of the federal government doesn’t take their rights as seriously as it takes the latest leftist fads.

Kenyon is one of two Idaho State students who sided in court last year with an Idaho law that bans males from competing in women’s sports, even if those males “identify” as women.

She appeared on “Fox & Friends” Monday with her attorney, Christiana Holcomb, to talk about the executive order Biden signed amid the flurry on his first day of office lets “transgender” athletes compete in women’s sports despite the natural, undeniable physical advantages that the male human body has over its female counterpart.

Recognizing the reality of the differences between the sexes, Idaho’s Republican Gov. Brad Little signed a law in May that banned all teams sponsored by public schools, colleges and universities from allowing male athletes from competing in women’s sports, according to The Associated Press.

The law, along with another that prohibited individuals from receiving new birth certificates with a gender other than the one they were born with, was inevitably challenged by the American Civil Liberties Union. The ACLU called the laws “discriminatory, unconstitutional and deeply hurtful,” according to CNN.

But for Kenyon, what’s “deeply hurtful” is to be forced into an athletic competition with an opponent who has advantages literally built-in by nature.

“And having experienced that, I decided to get involved in this lawsuit because I felt like it was the best way for me to get my voice out and fight for these opportunities that should be preserved for women.”

Check out the interview here:

That’s the kind of statement that should draw cheers from the liberal end of the political spectrum, where women’s empowerment is supposed to be a top priority. But women like Kenyon — and better-known figures like “Harry Potter” author J.K. Rowling — are finding out that in the 21st century, the rights of imaginary females are trouncing the rights of flesh-and-blood women.

And as Biden’s executive order showed, the White House is fully on board with that.

Holcomb, Kenyon’s attorney, put Biden’s action in perspective even liberals should be able to understand.

“What we do know is it sends a message loud and clear to female athletes like Madison that you don’t matter to this administration,” she told Earhardt.

“Frankly, federal law does not matter to this administration, because federal law is really clear that we have women’s sports as a separate category to ensure that female athletes get to be champions and get to have [a] fair and level playing field.”

The reality is, this shouldn’t even be a matter for serious people to debate. Literally, every human being who passes puberty knows full well that the male body as a rule is bigger and stronger. That basic fact is only more true when it comes to athletes and physical conditioning. It’s why Serena Williams and Rafael Nadal, for instance, will never play for a title at Wimbledon.

(It’s why Serena Williams probably won’t be eager to play any reasonably ranked male tennis player for that matter. At least not in public.)

The fact that some males decide to wear dresses or flowers in their hair doesn’t change the basic makeup of their bodies.

Athletes like Kenyon, who spend their lives training to compete in a sport against their peers, are getting the shaft from the same Democrats and leftists that claim to champion women’s advancement in every other aspect of society.

“This is important to me because I’ve experienced it. I know how unmotivating it is and how frustrating it is to lose to a biological male and to see them on the podium in the female sports,” Kenyon told Earhardt. “And I don’t think any other female should have to experience that.”

It’s unclear how, or if, Biden’s executive order would affect the ACLU’s challenge to the Idaho law, but it is clear the issue isn’t going away.

Holcomb, as befits an attorney, rendered the argument in unassailable logic.

“Men and women are not identical, and this is really showcased well in sports. The whole reason that we have women’s sports as a separate category is to showcase those physiological differences and ensure that female athletes like Madison get a chance to be champions…,” she said.

“At bottom, what we need to be doing is ensuring that the female sex category is protected because there are those physical differences between the sexes that make it unfair to force females to compete against physiologically superior male athletes.”

Do you think it is right to have transgender females compete in women’s sports?

That isn’t rocket science. It’s not advanced medicine. It’s a simple fact of life understood by every honest person whose mind isn’t warped by leftist propaganda.

That might leave out Biden and his backers, but it still includes the majority of Americans — whether they’re men or women, athletes or couch potatoes.

And doubters can always ask someone like Madison Kenyon.