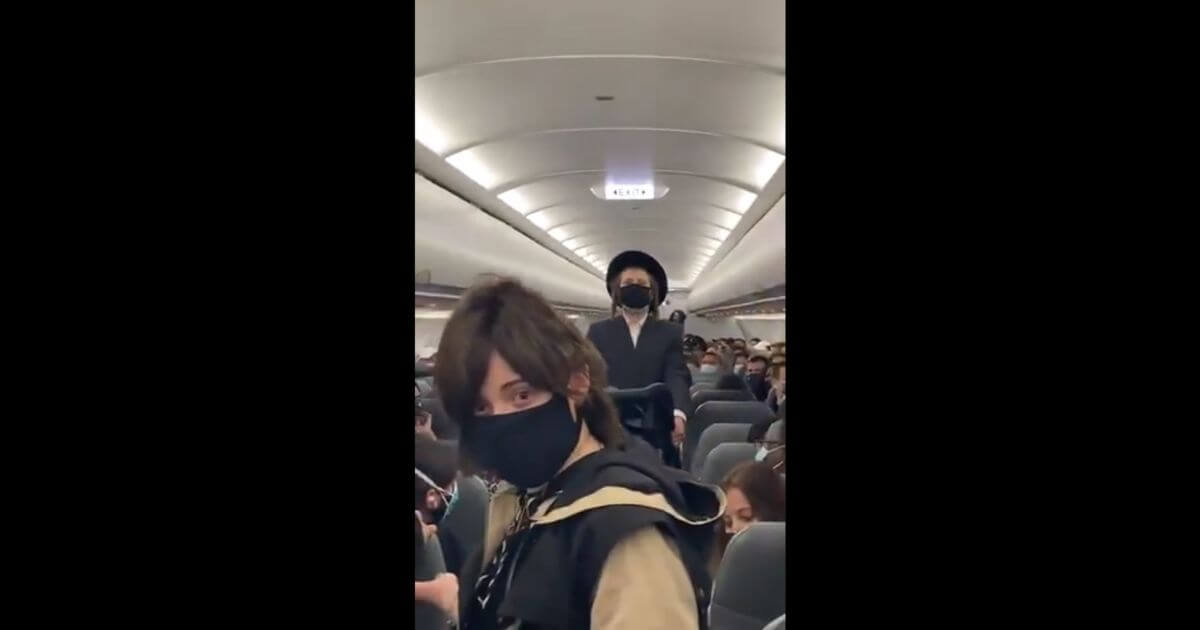 Frontier Airlines stands accused of anti-Semitism after videos surfaced of flight staff removing a Hasidic Jewish family from an airplane.

The New York Times reported the incident took place Sunday night during a flight scheduled to leave from Miami to La Guardia airport in New York. The airline staff’s attitude toward the Jewish family has garnered condemnation from the public and several of the flight’s passengers.

The family was allegedly removed for refusing to wear masks in compliance with COVID-19 guidelines.

Footage of the incident was posted on Twitter by the Orthodox Jewish Public Affairs Council the day it occurred. All of the adult group members appear to be wearing masks, and the only person seen maskless on video is an 18-month-old baby.

According to Fly Frontier’s face mask policy, “face coverings are not required for children under the age of 2.”

The accusations of anti-Semitism also stemmed from the flight staff’s treatment of the family as the crew removed them from the plane.

“Disturbing incident the last hour on a @FlyFrontier flight as staff told a Hasidic couple to get off because their 18 month old had no mask,” the OJPAC tweeted.

“Applause is heard as the couple started leaving. [Travelers] say on camera that the applause came from staff who also cheered that ‘we did it.’”

Many of the passengers on the plane appeared to voice support for the Jewish family.

“What are you accomplishing?” one female passenger can be heard saying to the flight staff.

“This is Nazi Germany!” someone else called out.

Disturbing incident the last hour on a @FlyFrontier flight as staff told a Hasidic couple to get off because their 18 month old had no mask. Applause is heard as the couple started leaving. Travels say on camera that the applause came from staff who also cheered that “we did it.” pic.twitter.com/rA2JQmI1tU

“An Orthodox Jewish person spoke up in defense of the Hasidic couple,” OJPAC wrote in a follow-up tweet.

“Then the whole family siblings and in-laws started leaving the plane at which point the @FlyFrontier ordered everyone off of the airplane.”

“This is anti-Hasidic Jews! That’s what this is all about!” the Orthodox Jewish man said. “This is an anti-Semitic act. Anti-semites!”

One of the women in the group of Hasidic Jews can be heard saying that the children in their group took off their masks to eat. According to the woman, the flight staff approached them before the kids “even took it off.”

An Orthodox Jewish person spoke up in defense of the Hasidic couple. Then the whole family siblings and in-laws started leaving the plane at which point the @FlyFrontier ordered everyone off of the airplane. pic.twitter.com/N1OwqxFI3Q

In another video posted by OJPAC, several passengers alleged that they witnessed a celebratory attitude from the flight staff after removing the family from the plane.

“I says I was wearing a mask,” one male passenger said. “She’s throwing me off the plane because I was taking videos. And I saw them high-fiving each other, and high-fiving and saying “a job well done to those Jews.”

Two other passengers made similar claims.

“Okay, they were telling [the Hasidic family] they don’t have masks, a family of three. And I told them that I was the first one in the back, and I saw them all coming on board with masks,” a female passenger said.

“And they started to scream at me I should sit down. And at the end, [the flight staff] all high-fived each other, and I think they said, ‘We did it!’”

“They made a high-five, and I saw that also. That they was making high-five,” another male passenger said. “That they ‘achieve.’ Whatever they did to throwing them from the airplane.”

EYEWITNESS VIDEO! Multiple people say on the record in this video that as the Hasidic couple started leaving the airplane, @FlyFrontier staff applauded, exchanged high fives and one allegedly said “a job well done to those Jews.” Att @PeteButtigieg @FAANews @SenatorCantwell pic.twitter.com/m1Azjw5Hbx

The Anti-Defamation League of New York called for a “full & transparent investigation” on Twitter the next day into the “apparent #antisemitic comments made by crew or others.”

A visibly Jewish family was asked to leave a @FlyFrontier flight allegedly due to lack of mask compliance; while deplaning, apparent #antisemitic comments made by crew or others. @ADL formally calls for a full & transparent investigation https://t.co/6Y9yUkmZ8j

Still, a Frontier Airlines spokeswoman appeared to maintain that the flight staff was only complying with COVID-19 safety measures.

According to a statement provided to The Western Journal from spokeswoman Jennifer de la Cruz, the airline removed the passengers after they ”repeatedly refused to comply with the U.S. government’s federal mask mandate.”

“Multiple people, including several adults, were asked repeatedly to wear their masks and refused to do so,” de la Cruz said.

“Based on the continued refusal to comply with the federal mask mandate, refusal to disembark the aircraft and aggression towards the flight crew, local law enforcement was engaged. The flight was ultimately canceled.”

“Frontier Airlines and U.S. government policy mandate that all passengers over the age of two, other than those with a recognized ADA disability that prevents them from wearing a mask, must wear a mask while onboard an aircraft,” she added.

The spokeswoman did not address the allegations from other passengers regarding the flight crew’s behavior toward the Hasidic Jewish family as they left the plane.