Joe Biden Gets Caught Ignoring His Own Mask Order Again, This Time Indoors and Around Other People 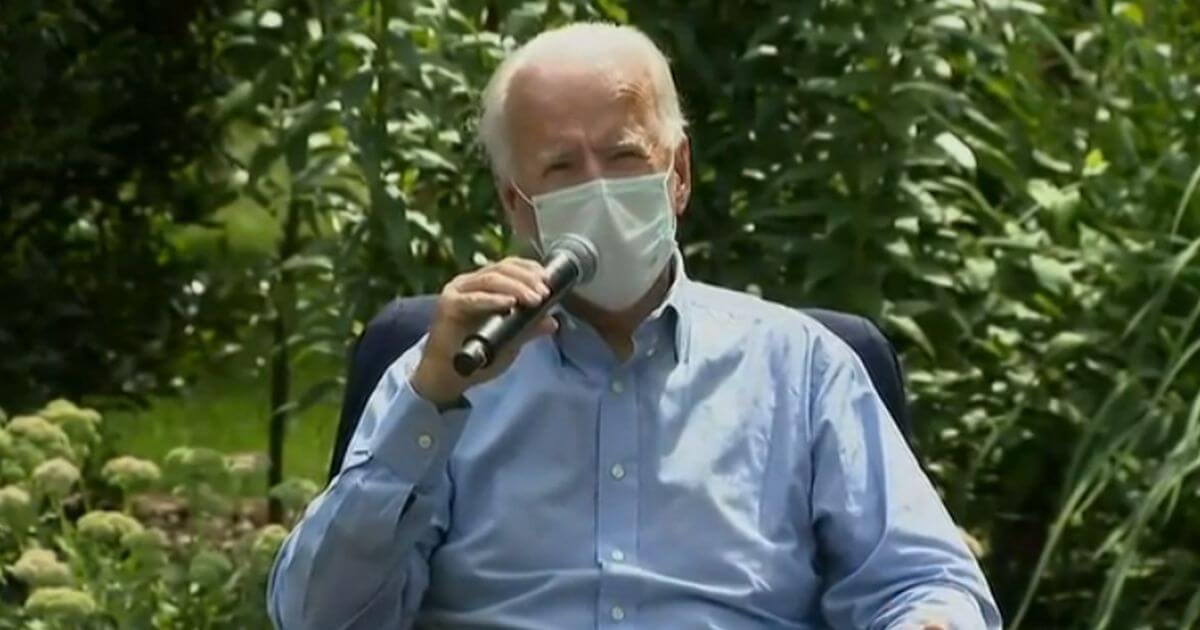 President Joe Biden, surrounded by a room full of people, flouted his own mask mandate on Thursday when signing a pair of executive orders in relation to health care.

It isn’t the first time Biden has ignored the mandate, but it’s the first time he’s been brazen enough to do it while surrounded by a group of people who, according to Democrats, are put at the risk of certain death when around people not wearing at least one mask.

Biden commented on the mask hypocrisy.

“Since we are socially distanced, I think I can take my mask off to make this very brief announcement,” he told reporters, according to an official White House transcript of his remarks.

He went on to attack former President Donald Trump while signing a pair of orders to “undo the damage Trump has done,” he said.

“There’s nothing new that we’re doing here, other than restoring the Affordable Care Act and restoring the Medicaid to the way it was before Trump became president,” Biden stated.

Biden’s executive order on masks does allow for some exemptions, but as we understand it, for Biden’s own photo op to have been exempt, he would have had to give himself permission in writing. So far, the White House has not responded to The Western Journal’s request for information on such paperwork — if it exists.

Per wisdom gifted upon us all from Dr. Anthony Fauci, Biden would have been a better ambassador to health, safety and obedience had he worn two masks. The new president instead settled on no mask at all, despite the fact that he wants you and your family to wear one in perpetuity.

This is all, of course, a reminder of why we mustn’t just listen to those in charge. We need to watch them and evaluate their behavior.

Their behavior tells us they’re playing us all for fools. They run one small, elite club and we’re not in it. To pull from George Orwell’s “Animal Farm,” “All animals are equal, but some animals are more equal than others.”

Democrats, including Biden, have told us for nearly a year to wear masks and to stay away from one another. But so many high-profile Democrats simply cannot resist ignoring their own rules.

Just look at them in all of their hypocrisy:

“President Biden was spotted maskless at the Lincoln Memorial on Wednesday night—hours after signing an executive order mandating the use of masks on federal land.”

I don’t want to act like this is a huge deal, but it is YIKES.https://t.co/e5ECiqiIPf

And then Jill Biden joined them and they admired her corsage. pic.twitter.com/esxqEUt9oz

And there’s Dr. Anthony Fauci showing us all he knows exactly how well masks work! Thanks for the lesson, doc. pic.twitter.com/jdHPzq5HfB

EXCLUSIVE: We’ve obtained photos of Governor Gavin Newsom at the Napa dinner party he’s in hot water over. The photos call into question just how outdoors the dinner was. A witness who took photos tells us his group was so loud, the sliding doors had to be closed. 10pm on @FOXLA pic.twitter.com/gtOVEwa864

WATCH: Dianne Feinstein ends the ACB hearing by praising Lindsey Graham and giving him a hug (with no mask, of course) https://t.co/VVxu21S5IW

“Gov. Ralph Northam has repeatedly urged Virginia residents to cover their faces in public during the COVID-19 pandemic, but the Democrat didn’t heed his own plea when he posed mask-less for photographs alongside residents during a weekend beach visit.”https://t.co/F6zEpZP7Q8 pic.twitter.com/7UgBChRQSy

Democrats, despite all their rhetoric, don’t wear masks. Why should the rest of us feel compelled to listen to anything these people have to say?