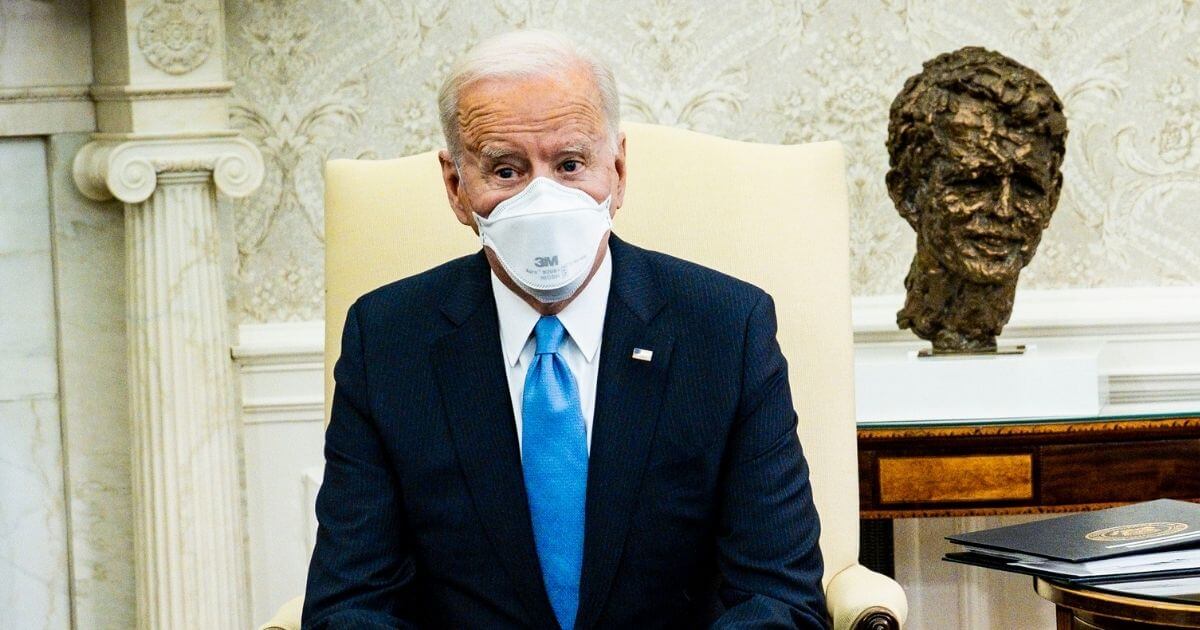 Republican governors who have lifted their states’ oppressive mask mandates struck back on Wednesday after President Joe Biden compared them to “Neanderthals.”

Biden had asked the country to wear masks throughout his first 100 days in office, a term which thus far has been an abject failure with regard to the coronavirus pandemic and other issues. Without the power to force people to wear masks, Biden asked nicely.

“On the first day I’m inaugurated, I’m going to ask the public for 100 days to mask. Just 100 days to mask — not forever, 100 days. And I think we’ll see a significant reduction [in cases],” Biden told CNN’s Jake Tapper in December.

President-elect Biden tells Jake Tapper he will ask all Americans to wear masks for the first 100 days after he takes office: “I think we’ll see a significant reduction … to drive down the numbers considerably” https://t.co/lQkT0HPc5h pic.twitter.com/PxIGzPjxP7

One glimmer of hope since Biden’s inauguration has been seeing a number of Republicans leaders stand up to Democrats and the president, specifically on issues related to the pandemic. Junk science and political theatrics are prevailing in Democratic-run cities and states.

But the Republican governors of Texas and Mississippi on Tuesday announced they were lifting their state’s masks mandates — dealing a blow to Biden and his 100 days plea.

“The governor’s office is getting out of the business of telling people what they can and cannot do,” Reeves said, according to Mississippi Today.

The Austin American-Statesman reported Texas and Mississippi joined more than a dozen other states which have either lifted or never had a mask mandate.

Biden, who routinely neglects to wear his own mask, called out the leaders of states without mask mandates by challenging their intelligence.

“Look, I hope everybody’s realized by now, these masks make a difference,” Biden said. “The last thing, the last thing we need is Neanderthal thinking that in the meantime, everything is fine, take off your masks, forget it. It still matters.”

NEW: President Biden calls Texas and Mississippi decisions to end mask mandates “a big mistake” and criticizes what he views as “Neanderthal thinking” after CDC warned against complacency in the face of emerging coronavirus variants on Monday. pic.twitter.com/Mmdln3gNG6

“President Biden said allowing Mississippians to decide how to protect themselves is ‘neanderthal thinking.’ Mississippians don’t need handlers. As numbers drop, they can assess their choices and listen to experts. I guess I just think we should trust Americans, not insult them,” he shot back on Twitter.

President Biden said allowing Mississippians to decide how to protect themselves is “neanderthal thinking.”

Mississippians don’t need handlers. As numbers drop, they can assess their choices and listen to experts. I guess I just think we should trust Americans, not insult them.

Abbott on Thursday joined Fox News for an interview and actually accused Biden and Democrats of allowing the coronavirus to spread in Texas by failing to enforce the country’s immigration laws.

“The Biden administration was exposing Texans to COVID. That is Neanderthal-type approach to dealing with the COVID situation.”

“If making data-driven decisions to reopen, loving freedom, and trying to get back to normal is what a Neanderthal would do, then well, I guess you can count me as one,” Gianforte posted.

If making data-driven decisions to reopen, loving freedom, and trying to get back to normal is what a Neanderthal would do, then well, I guess you can count me as one. https://t.co/TYmjMuoR8Y

A couple of other prominent Republicans also responded to Biden’s comments.

You want to know the difference between Democrats and Republicans, here is one. Government versus individual control. Where should the power test? This isn’t a matter of discouraging masks, it is about personal responsibility instead of government edict. https://t.co/MRkeCG6lnM

Abbott, Reeves, Gianforte and more than a dozen other Republican governors, including Florida Gov. Ron DeSantis, have been a beacon of hope in the absence of national common sense and leadership since Jan. 20.

While Democratic governors have been inclined to shut people into their homes and tell them what to wear on their faces, those measures simply haven’t changed the trajectory of the coronavirus pandemic. They’ve apparently succeeded only at killing jobs.

But in areas of the country which don’t view the Bill of Rights as a government-issued license that can be suspended indefinitely, people are being asked to use their own judgment and to exercise their rights.

There’s certainly nothing primitive about that.