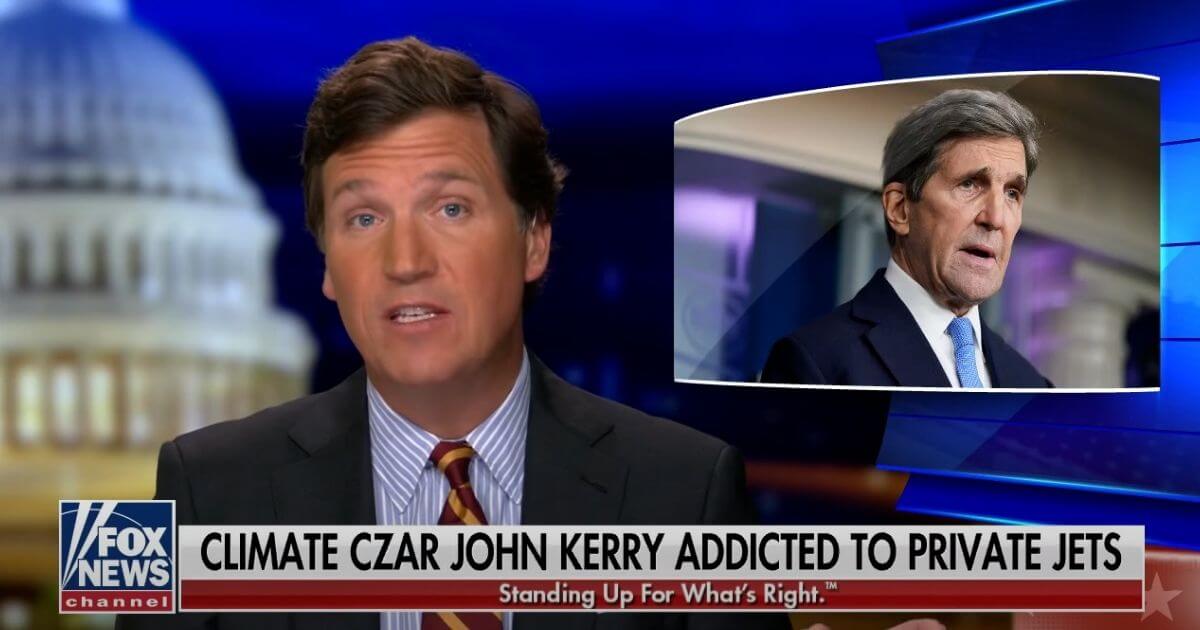 Fox News host Tucker Carlson torpedoed Democratic “climate czar” John Kerry for gallivanting around the world in gas-guzzling private jets while he scolds everyone else to be environmentally conscious.

Carlson said Kerry is the kind of cardboard leader “who leads by negative examples” and noted that like most hypocritical Democrats, the lifelong liberal talks the talk but never walks the walk.

“Over the past year, to just name one among many examples, John Kerry’s private jet — yes, he has one — has spent at least 20 hours in the air, emitting in the process more than 100 metric tons of carbon emissions,” he said. “Much more than you will emit in a lifetime since you don’t have a private jet. John Kerry is the kind of leader who leads by negative examples.”

Carlson recounted an outrageous 2019 incident where Kerry took a private jet to Iceland to receive an award for his efforts to “tackle environmental matters.”

“Naturally, John Kerry flew all the way to Iceland — that’s 3,000 miles away — on his private jet to accept this honor,” the Fox News host said.

“In his acceptance speech, John Kerry made it very clear people like John Kerry make him very angry,” he said. “In order to fight climate change, John Kerry said, we need to do exactly the opposite of what John Kerry himself is doing at the moment.”

However, when Icelandic journalist Jóhann Bjarni Kolbeinsson dared to question Kerry’s hypocrisy, he pompously dismissed the reporter by basically saying that following the rules is for plebes and not for elites like him.

“Back in 2019, one journalist in Iceland not yet brainwashed did have a question,” Carlson recounted. “He asked why did John Kerry fly all the way to Iceland on a private plane? Isn’t that a little hypocritical? Now, to our knowledge, no one covered John Kerry’s response at the time. It was completely buried. We have it now. You’re going to want to see it. This is John Kerry’s response.”

At the time, Kerry replied: “It’s the only choice for somebody like me who is traveling the world to win this battle … I have to fly to meet with people and get things done.” (Emphasis ours.)

Carlson said the incident perfectly encapsulates the left’s arrogant, entitled worldview: Rules for thee but not for me.

“None of the rules apply to the people in charge, obviously,” he explained. “The people in charge are important. You are insignificant. And that’s why corporations — Amazon, Microsoft, Apple — are seeing record profits right now even as your life falls apart. Even if, if you run a small business, you get arrested for trying to make a living.”

The mother of all ironies is that Democrats have rabidly marketed themselves as the “party of the people” when, in fact, their primary goal is to maintain their grip on power by forcing everyone else to submit to their rules.