Kamala Harris Accuses Biden of Working with Racists to Segregate Her 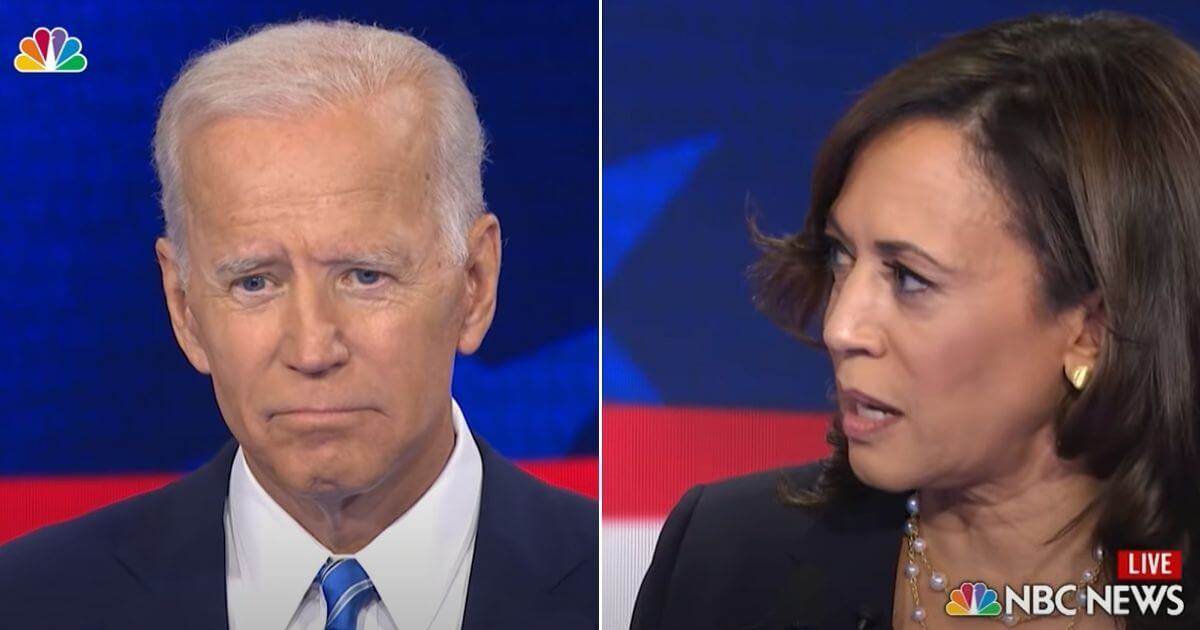 The beginning of the primary election season seems like a lifetime ago.

For one thing, as the pandemic was still months away, there was no reason not to cram those dozens of Democrats onto one stage on two different nights in 2019 to make their case for candidacy to the American people.

Something that also apparently has changed dramatically in the time since those first debates is then-Sen. Kamala Harris’ attitude toward the man whose ticket she’d go on to grace as running mate.

The one-time attorney general of California was quite indignant about then-fellow Democratic presidential candidate Joe Biden’s record on desegregation.

Now, however, she seems to think he’s just the man to heal our nation’s racist wounds.

Harris has been hailed for the historic milestone she achieved upon being sworn into office as the first black, first female and first black female vice president, and during her speech on Inauguration Day, she compared the moment to the Rev. Martin Luther King Jr.’s fight for racial justice.

That President Biden is now supposedly leading the nation into an era of achievement comparable to that of MLK rather boggles the mind considering just last year, Harris was criticizing him for praising segregationists and opposing federal busing programs to desegregate schools.

“I do not believe you are a racist. And I agree with you when you commit yourself to the importance of finding common ground,” Harris said in comments directed to Biden during the June 27 primary debate.

“But I also believe — and it’s personal, and I was actually very — it was hurtful to hear you talk about the reputations of two United States senators who built their reputations and career on the segregation of race in this country,” she continued.

Harris was referring to comments Biden had made in which he’d expressed appreciation for the “civility” of two of his former Democratic colleagues: Mississippi Sen. James Eastland and Georgia Sen. Herman Talmadge, who vigorously opposed civil rights legislation and racial integration.

“It was not only that but you also worked with them to oppose busing,” Harris said.

“You know, there was a little girl in California who was part of the second class to integrate her public schools, and she was bused to school every day,” she said of her childhood in Oakland.

“And that little girl was me.”

She later issued a tweet along with a photograph of said little girl, which would grace the thumbnails of countless glowing articles praising her boldness for being hard on Biden — the man those same outlets are now propping up as the person who will save us all from white supremacy.

There was a little girl in California who was bussed to school. That little girl was me. #DemDebate pic.twitter.com/XKm2xP1MDH

Yes, a man who actually worked with white supremacists, which was Harris’ beef with him in the first place.

How quickly those on the left forget.

They’ve also forgotten the sassy, aggressive manner in which Harris responded to Biden’s arguably decent defense of his own stance, in which he attempted to clarify that he supported Harris’ school district’s decision to bus and simply opposed federally mandated busing programs.

“I did not oppose busing in America. What I opposed is busing ordered by the Department of Education. That’s what I opposed,” a clearly flustered Biden managed to sputter out.

This wasn’t enough for Harris, who noted that some states had failed to integrate.

“There are moments in history where states fail to preserve the civil rights of all people,” she declared, going on to rousingly endorse the involvement of the federal government in such cases.

It’s easy to feel as though Harris, who often has been accused of being willing to do and say anything for professional advancement, is the one who has compromised her morals here.

But is this really is a case where she has compromised her indignant opposition to Biden’s previous views? Or is it one where Biden repented of his nuanced opposition to a highly complex issue and, along with it, any other hint of moderate policies?