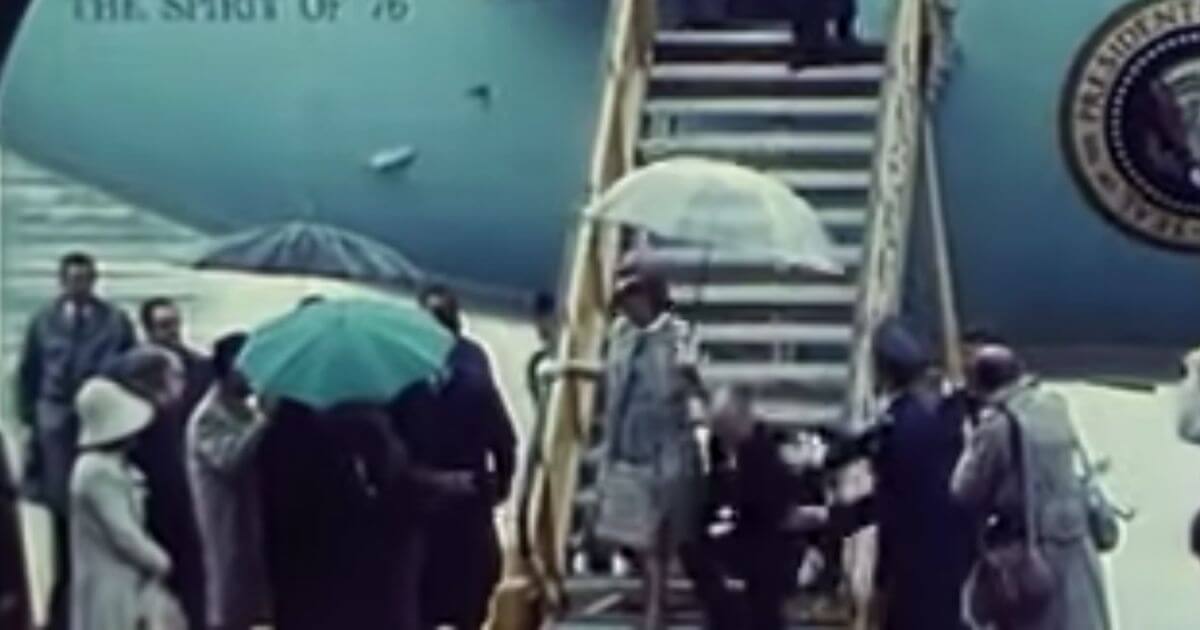 Immediately after President Joe Biden’s multiple slips and final tumble while climbing the stairs to board Air Force One on Friday, leftists online went into damage-control mode and attempted to justify the embarrassing moment.

Ford, the United States’ 38th president from 1974 to ’77, took a tumble down a set of stairs while exiting Air Force One in 1975 in Austria, as he was carrying an umbrella for his wife — then-first lady Betty Ford. He suffered little more than a bruised ego.

He went on to take other stumbles on the same set of stairs while in office — once in Egypt and another time in Michigan. He was labeled a klutz forevermore.

Presidents have a history — like all human beings — of engaging in clumsy behavior. That was the argument used by leftist Twitter, anyway, which desperately wants this embarrassing saga to go away.

Look at some of these people trying to compare Biden’s stumbling on Friday to Ford’s.

President Biden stumbled on the steps of Air Force One “President Ford” style.

But did Biden engage in Crimes Against Humanity, Sedition, or Genocide today?

Then IDGAF about Airplane steps.

I’ve been trying to find a US President who hasn’t tripped or stumbled on the Air Force One steps. I’m currently back as far as Reagan. No one has yet outdone Gerald Ford though.https://t.co/fwlWNOED1Y

As a reminder, President Ford was a football player in college so even athletes can trip, stumble, and fall now and then.

I’m old enough to remember President Ford. If something major happens to Biden let us know

But these two situations are not the same. Not even close. In 1975, Ford was a spry and mentally sharp man who was all of 61 years old. Ford, unlike Biden, could form coherent sentences and actually engage with reporters and other people.

Let’s look at some reporting from The New York Times from June 2, 1975, which covered Ford’s Austrian staircase tumble in great detail.

“In that incident he fell down the last five steps of a rain‐slicked steel stairway while descending with his wife from Air Force One, losing a heel from his shoe in the process,” The Times reported.

“Apparently unhurt except perhaps for his dignity, he recovered his composure quickly, shaking the hand of Chancellor Bruno Kreisky and moving to review the honor guard, a toy‐soldier‐like company clad in peaked shakos and blue jackets loaded with braid, straps and piping,” the outlet added.

“The President began his arrival speech to the crowd with a quip about the accident: ‘Thank you for your gracious welcome to Salzburg, and I am sorry I tumbled in.’”

Does any of that reporting, which gives you a pretty clear picture of Ford’s mental state at that point, sound like Biden?

Biden, who (at this point) we can’t even be sure knows what is happening around him all the time, slipped and regained his balance. He then slipped again in a similar fashion before ultimately face-planting. Biden actually for a moment looked as if he might have been in serious distress.

Presidents do fall, and we know Ford did his fair share of that. But one of these situations is not like the other. Biden’s fall comes amid nonstop speculation that he might be a few cards short of a full deck.

That face-plant on a dry, carpeted staircase came one day after an international rival — Russian President Vladimir Putin — challenged the 78-year-old, mano a mano, to a verbal duel for all the world to see. Biden apparently declined and hours later, struggled to climb a staircase.

The hermit president’s first two months have been an utter disaster. Had the man not made a crisis out of a stable border, canceled a valuable infrastructure project, demolished the jobs that went with it or at least showed any semblance of transparency in the process, he might have gotten away with the Ford stereotype of clumsy behavior.

But Biden is no Ford. Ford spoke to reporters: clearly, confidently and with no handlers in sight.