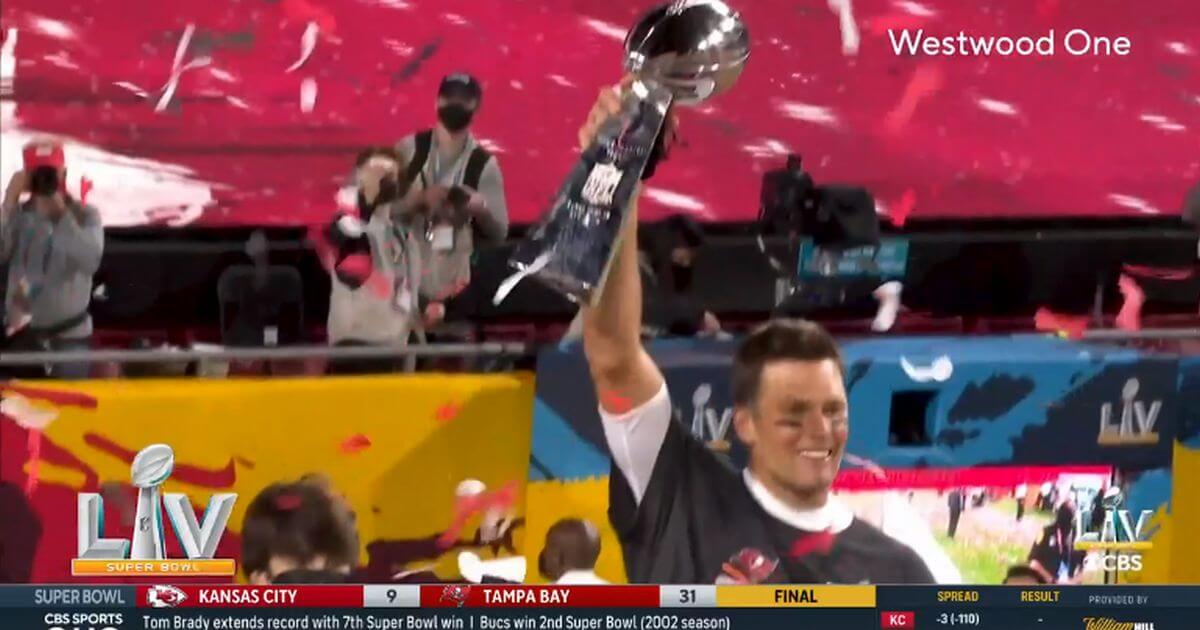 NFL legend Tom Brady cruised to his seventh Super Bowl victory Sunday night, but he was brought to bay by critics who piled on because Brady was not wearing a mask before the game.

Brady’s Tampa Bay Buccaneers dismantled the Kansas City Chiefs in a 31-9 win at Raymond James Stadium in Tampa, Florida, in which Brady was named the game’s MVP, his fifth such honor.

For some, the 43-year-old quarterback’s sin of not wearing a mask was much like his long-past comments supporting Donald Trump.

I guess the good news is that Tom Brady doesn’t get to celebrate with Donald Trump at the White House.

All in for the Chiefs tonight. I like Patrick Mahomes; he seems like a good person and a good leader. Also as a Bronco’s fan growing up, gotta rep the AFC. Also I can only imagine the awkwardness if the Bucks win and Brady has to visit the White House without Dear Leader there…

Others simply said it was unthinkable that Brady did not obey the guidelines and wear a mask.

“Considering everything happening in that stadium I doubt this actually matters but a dude as famous as Tom Brady should just do the right thing and wear a mask,” reporter David Kroman tweeted. “I think I have to turn off this game. It’s making me angry.”

Considering everything happening in that stadium I doubt this actually matters but a dude as famous as Tom Brady should just do the right thing and wear a mask. I think I have to turn off this game. It’s making me angry. https://t.co/MjPFw6bdqW

2/2 a truly good person who has any kind of a leadership role considers mask-wearing vs mask-refusing as their example to the masses. I have assumed the best and therefore assumed ignorance, not malice, in Brady. But it was, no question, a big failure before the biggest audience.

Considering everything happening in that stadium I doubt this actually matters but a dude as famous as Tom Brady should just do the right thing and wear a mask. I think I have to turn off this game. It’s making me angry. https://t.co/MjPFw6bdqW

“Everybody should be wearing a mask,” Myers said on “The Eye Test for Two” podcast. “We know that. And then considering that his father was in the hospital for 18 days with coronavirus. If he wasn’t wearing a mask before that … how do you explain a bright guy like this who has personal experience to rely on — that his parents were pretty sick? His father was in the hospital for over two weeks. How can he not wear a mask, then go home after a game to his wife and kids? I don’t understand that.”

“Tom Brady is a role model,” the longtime NFL reporter said. “There are kids watching this game and saying, ‘Why do I have to wear a mask? Tom Brady’s not wearing a mask.’ And he’s taken his responsibility so seriously as a role model over the years.

“I hate to keep saying it, but I just don’t get it — especially when something hits so close to home with his parents — that he’s still not taking what you’d think to be every precaution possible to make sure he doesn’t get it. Because we know there are players that are playing games that haven’t been diagnosed yet because it can stay in your body for days. Why would you take that chance?” Myers said.

“It’s hard enough playing the games and getting tackled with a guy laying on top of you. You’re not wearing a mask then, so there’s nothing you can do to prevent it. But there are certain situations on the bench, after games, greeting players from other teams, that you can certainly take every precaution. And I just don’t understand why he hasn’t been doing it … and why there are a bunch of players [elsewhere] that aren’t doing it,” he said.