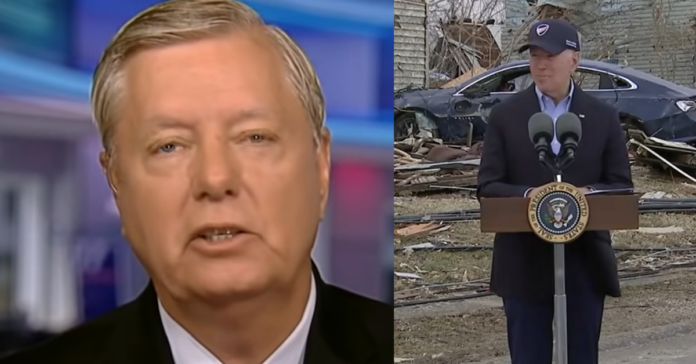 Senator Lindsey Graham doomed President Joe Biden’s new spending plan called the Build Back Better bill. The GOP Senator predicted Biden’s plan was dead in the Senate. He said: “I think Build Back Better is dead forever and let me tell you why. Because Joe Manchin has said he’s not going to vote for a bill that will add to the deficit.

“Well, if you do away with the budget gimmicks, Build Back Better, according to the CBO adds $3 trillion to the deficit. He doesn’t want to vote for a bill that makes inflation worse – and one thing we haven’t talked about tonight that was mentioned today.

“The child-care provisions in Build Back Better prohibit religious institutions from receiving money,” he said.

“The CBO and the inflation number last Friday, I think, kill Build Back Better. They were trying to pass a lie, and God bless Joe Manchin for sticking to his guns,” Graham said.

From The Daily Mail:

Graham asked the CBO to calculate the bill’s effects on the deficit if programs — including a child tax credit and free preschool for all 3- and 4-year-olds — would continue over 10 years, rather than phasing out sooner as proposed by Democrats.

Graham claimed he asked for the CBO score at Manchin’s request.

‘Joe Manchin came to me and he said, ‘I think this bill is full of gimmicks, that these programs won’t go away, Lindsey, and if you score them for 10 years, I think the bill will double.’ Well, it didn’t double, it was almost 2.5 times,’ he said on Fox News Sunday.

Manchin, a key centrist Democratic vote, has raised the bill’s child tax credit provisions as a point of contention. The West Virginia senator grew irritable with reporters on Wednesday as he takes heat for thwarting Democrats’ plans to pass the bill by Christmas.

‘This is b******t. You’re b******t,’ he yelled at Arthur Delaney, a HuffPost politics reporter who asked him about reports that the child tax credit has become a major sticking point in his talks with the White House.

Quoting @NormOrnstein, WH Press Sec. Jen Psaki dismisses the CBO score of a version of Build Back Better Act, which was requested by Sen. Lindsey Graham (R-SC) and projects the cost of the original $3.5T bill without the bill’s original tax increases:

“This is a fake CBO score.” pic.twitter.com/ryNW8yx5t1

Find it amusing that liberal @PolitiFact believes it is more reliable than CBO when it comes to scoring #BuildBackBetter.