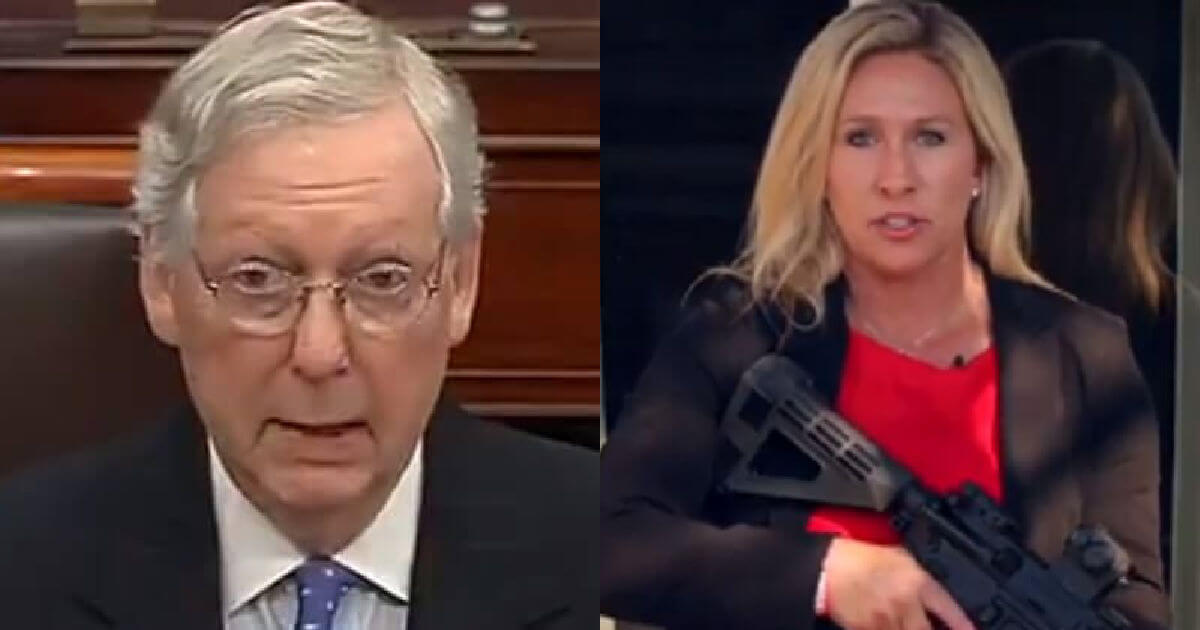 Georgia GOP Rep. Marjorie Taylor Greene, a freshman lawmaker who has been one of the most vocal, high-profile supporters of the belief that the 2020 election was rigged and stolen from former President Donald Trump, was slammed this week by Senate Minority Leader Mitch McConnell.

According to The Hill, McConnell held nothing back as he attacked the pro-Trump lawmaker over her controversial views that include conspiracies surrounding the September 11th terrorist attack, the assassination of former President John F. Kennedy and other mainstream conspiracy theories.

“Somebody who’s suggested that perhaps no airplane hit the Pentagon on 9/11, that horrifying school shootings were pre-staged, and that the Clintons crashed JFK Jr.’s airplane is not living in reality,” McConnell said in a statement to The Hill. “This has nothing to do with the challenges facing American families or the robust debates on substance that can strengthen our party.”

“Loony lies and conspiracy theories are cancer for the Republican Party and our country,” McConnell added.

McConnell criticizing a freshman lawmaker has been reported as “rare” and could signal his recently revealed ambition of attempting to remove as much pro-Trump sentiment out of the party as possible, in preparation for the 2022 midterm elections.

But Taylor Greene has made very clear that she’s not the kind of person that will take such criticism without a fight, which she proved in a Twitter response to McConnell’s unusually harsh critique.

“The real cancer for the Republican Party is weak Republicans who only know how to lose gracefully. This is why we are losing our country,” she tweeted.

The real cancer for the Republican Party is weak Republicans who only know how to lose gracefully.

This is why we are losing our country.

Given her strong base of millions of Trump supporters, it’s no surprise that they agreed with her response wholeheartedly, labeling McConnell a “RINO” and many words that I’m not allowed to print here. Her tweeted response received tens of thousands of replies and retweets within hours.

But McConnell isn’t the only high-profile Republican attempting to distance the party from a firebrand conservative like Taylor Greene. Republican National Committee Chairwoman Ronna Romney McDaniel has also condemned the Georgia lawmaker’s remarks.

“The comments that are being put forward by Marjorie Taylor Greene are atrocious,” she told The New York Times. “They need to be condemned. They are violent, they are inaccurate — they are very, very dangerous.”

While Taylor Greene has the support of what appears to be the vast majority of Trump’s supporters, it’s unfortunate that Republicans are already entering into an intra-party war just a year out from campaigning for the midterms. There’s literally nothing more important in politics for the GOP than to win back a majority in the House in 2022.

Hopefully, the Taylor Greene side of the party and the McConnell side can compromise sooner than later, or else Republicans will go even deeper in the hole over the course of Biden’s presidency.