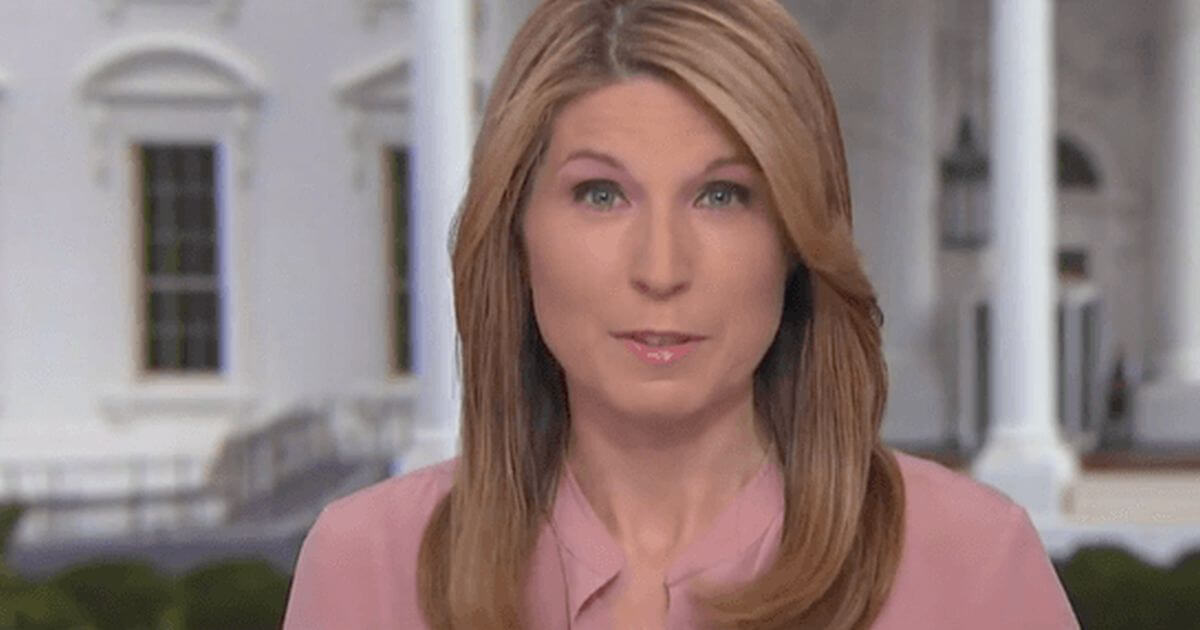 Give MSNBC’s Nicolle Wallace some credit: It’s been a solid week since someone on her show has talked about drone strikes against U.S. citizens on American soil.

I know that doesn’t sound like rhetorical continence, but you take what you can get these days.

Wallace, an erstwhile Republican operative, has done well off of the Lady Macbeth grift in the past few years. Each weekday, on the peacock network’s hard-left cable subsidiary, she rubs her hands raw with pumice soap trying to wash off blood that isn’t there.

Normally, this is harmless stuff. In fact, it’s funny sometimes.

If you can track down the clips of her calling then-presidential candidate Pete Buttigieg and anti-Trump, anthem-kneeling U.S. Women’s National Team soccer star Megan Rapinoe “chicken soup for [her] soul,” or the segment from August of 2018 where she hyped up the presidential chances of Stormy Daniels’ attorney Michael Avenatti — “If they decide they value a fighter most, people would be foolish to underestimate Michael Avenatti,” Wallace said of the stoat-like con man, now a convicted extortionist awaiting trial for allegedly bilking Daniels and tax and bankruptcy fraud — they’re downright uproarious.

Wallace’s unserious bilge has serious consequences, however, when she po-facedly floats the idea of killing Americans in drone strikes because they’re terrorists who listened to Donald Trump.

On Friday’s edition of “Dateline: White House,” Wallace and her panel discussed a National Terrorism Advisory System Bulletin which warned that “some ideologically-motivated violent extremists with objections to the exercise of governmental authority and the presidential transition, as well as other perceived grievances fueled by false narratives, could continue to mobilize to incite or commit violence,” according to Blaze Media.

The subtext obviously refers to extremist far-right militias — a legitimate threat, although it’s good to see political points being scored with talk about “other perceived grievances fueled by false narratives.” Wallace and the panel seize upon this, saying the bulletin described “a persistent threat of domestic extremism, domestic terrorism carried out in the ideology and around this belief that the election was fraudulent, that the Covid restrictions are unnecessary. All of those ideologies pushed by Donald Trump.”

So, if this is domestic terrorism, what do we do to actual terrorists, like al Qaeda members?

“We had a policy, and it was very controversial, it was carried out under the Bush years, and under the Obama years, of attacking terrorism at its root,” Wallace said. “Of going after and killing, and in the case of Anwar al Awlaki, an American, a Yemeni-American, with a drone strike for the crime of inciting violence, inciting terrorism.”

Awlaki, a Yemeni-based cleric, did a whole lot more than incite terrorism. He was a key propagandist for al Qaeda in Yemen, communicated with the Fort Hood terrorist shooter prior to the attack (and subsequently said the shooter was “a hero”), was a recruiter for the terrorist group and was a fugitive from justice at the time he was killed.

So, you know, completely the same as Donald Trump:

So……. they are pretty much saying they have to stop incitement of violence by inciting violence themselves!

This as MSNBC’s Nicole Wallace suggests we use domestic Drone strikes on Americans as a solution to lockdown protestors! pic.twitter.com/LiyaiYthx5

How does he not vote to convict someone that he said, on the floor of the Senate, incited an insurrection?”

Is Wallace calling for drone strikes against these militias or just throwing things against the wall and seeing if they’ll stick?

In defense of the latter explanation, take a look at this panel and see if anyone appears they’re fully grokking what Wallace is talking about:

In defense of the former explanation, consider that this is the second time in a little over a week that the idea of drone strikes on American soil were floated on Wallace’s show. The last time, NBC national security analyst Clint Watts, a former FBI agent, was the source:

“If you took what President Trump said and you instead put it in Anwar al Awlaki’s mouth, we would be talking about a drone strike overseas,” Watts said.

“That’s one aspect with our political leaders talking about this rhetoric. There’s several other reasons why it’s more dangerous today. One, domestic terrorists have open access to weapons in ways that international extremists did not. When I was working at the FBI two or three different periods, never did we have many ISIS supporters who could acquire handguns, long weapons, long rifles, long guns, explosives, explosive primers.”

In fact, Watts seemed to believe these militia groups were more dangerous than al Awlaki and Co. because militias like the Oath Keepers have access he could never hope to have. While I understand far-right militias present a huge law enforcement threat at the moment (albeit one the media loves inflating), I distinctly remember al Qaeda having taken part in some major attacks in the past 20 years or so. In fact, we’re coming up the 20th anniversary of one attack that should serve to put this into perspective.

Furthermore, “Deadline: White House” panelists are apparently enamored of commingling the intentions of extremist groups like the Oath Keepers and politicians like former President Trump, Republican Texas Sen. Ted Cruz and GOP Missouri Sen. Josh Hawley, as if to say they’re the Awlakis of American politics because they had issues of varying intensity with the logistics of the 2020 voting process.

This isn’t just disingenuous, it’s dangerous. There are reasonable questions about the way we carried out the last election, unreasonable and irresponsible claims of voter fraud, and calls to overthrow the government by violent groups that blessedly don’t have the resources to carry it out.

The three are entirely separate. If this is so difficult for them to figure out, none of them should be on cable news, dropping vague comments about drone strikes on American citizens because it perks viewers’ ears up. That unpleasant prospect, realized twice in the space of less than two weeks, is chicken soup for nobody’s soul.

Judge Releases Cowboys For Trump Founder From Jail, Says "He Was Not A Participant In The Violent Break-In At The Capitol"