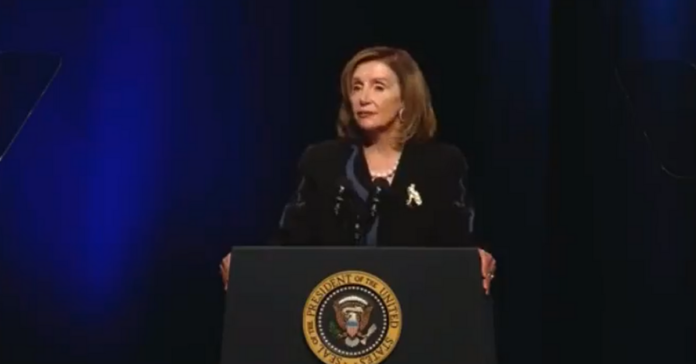 House Speaker Nancy Pelosi nearly fell on her rear end after giving a speech at Harry Reid’s funeral service in Las Vegas on Saturday. Pelosi was just one of the big name Democrats who spoke at Reid’s funeral including President Joe Biden and former president Barack Obama.

The House Speaker finished her speech with the words, “God truly blessed America with the life and legacy of Harry Reid. May he rest in peace,” and tried to walk off the stage.

Pelosi gathered her things and began to exit the little stage that held the podium but missed the step and nearly came crashing down as you can see in the video below. Pelosi is 81.

Obama called Reid a “true and loyal friend,” in his speech saying he was one of the few who believed he could win the presidency in 2008.

“He was one of the first people to encourage me to run for president, believing that, despite my youth, despite my inexperience, despite the fact that I was African American, I could actually win. Which, at the time, made one of us,” Obama said.

“The whole conversation would last about five minutes, but in those five minutes, he’d communicate more than some folks do in a couple of hours,” Obama said.

“That’s who Harry was – a man who knew what was important and didn’t believe in dwelling on what wasn’t.”

Obama added: “Goodbye, Harry. Thank you for everything. Nevada has never had a greater champion.

“The Senate and the country benefited from your extraordinary leadership, and I could not have asked for a better, truer friend. I sure did love you back.”

“Harry would always have your back. Harry had mine, and he knew I had his. He said, ‘I’m so proud, Joe. You’re my brother. You won.

“Well, it was a big deal to me that he felt that way. You know Harry never wrote what he didn’t believe. It made me feel good. He gave me a sense of confidence.

“May this be his legacy.

“Call on each of us to be our best. Speak truth from the heart.

“Take up the remaining rounds of Harry Reid’s good fight for the America we all love.

“What a gift. I mean this from the bottom of my heart — what a gift.”