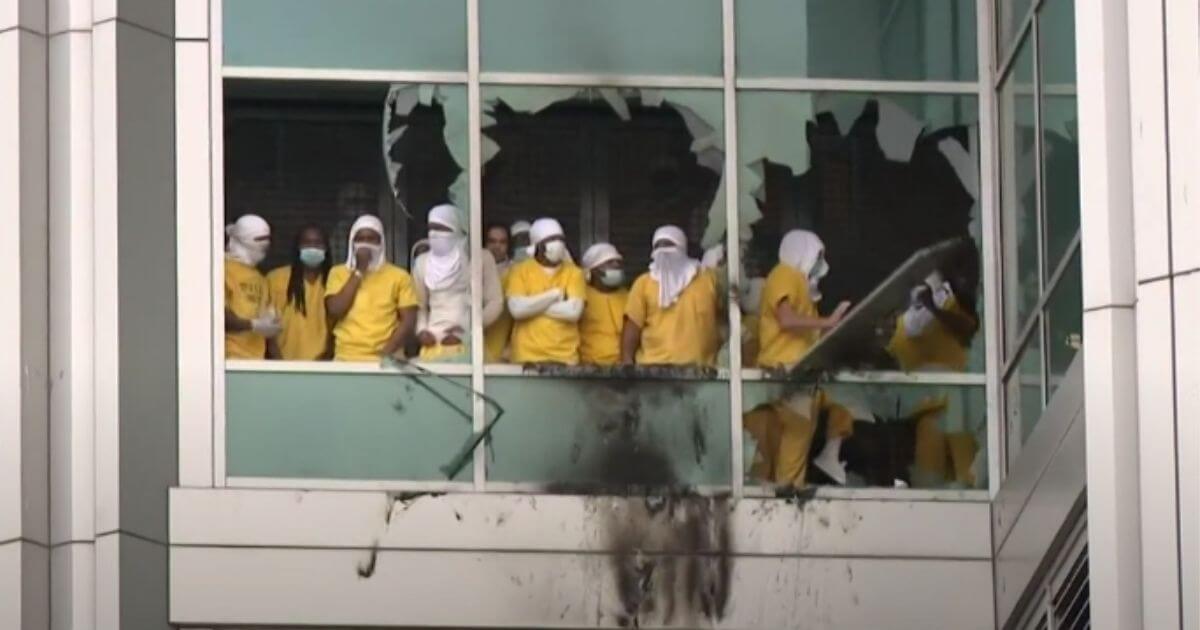 Prisoners who rioted in a St. Louis jail Saturday were cheered on by neighborhood residents who celebrated the spectacle of windows being smashed and debris thrown to the street.

As authorities sought to bring the facility under control, a film crew at KSDK-TV noted that some residents who had come to see the fuss were calling out their support for the inmates.

“People appear to be cheering on the inmates, a group of about 3 people are currently dancing in the street. One man shouts ‘free the gang,’” reporter Jasmine Payout tweeted.

People appear to be cheering on the inmates, a group of about 3 people are currently dancing in the street. One man shouts “free the gang”. @ksdknews pic.twitter.com/TKNij2SY65

The violent outbreak, which began at about 2:30 a.m., became very public after inmates broke windows on an upper floor.

Inmates chanted and held signs, with demands written on them.

Items including chairs were thrown out of the windows, Some items were set ablaze before they were thrown to the street below.

People incarcerated in the St. Louis city jail have taken over part of the jail and broke the windows, loved ones have gathered outside and are chanting in support of them.https://t.co/Z8czXbLSaR

A few months ago I wrote about how prisoners in Texas could pop open their cells & jump out.

Some officials I talked to were skeptical that this was a widespread problem – but apparently it’s happening elsewhere too.

This is how the riot in the St. Louis jail was possible: https://t.co/NbOMUr5MA5

“There is no one housed for misdemeanor, municipal offense or a low-level felony. These are assaults on a police officer, homicide, things of that sort — very, very violent men that are housed in these two units,” Edwards said.

Edwards said charges may be filed against those who led the uprising.

Edwards said the riot began after a corrections officer scuffled with a detainee on the fourth floor of the facility.

Cells soon emptied because detainees were able to open cell doors. The jail has known there was a problem with cell locks since December, Edwards said.

“Even though our automated P.A. system would indicate that the cells are locked, they are in fact not locked and so other detainees were able to get out of their cells and into the unit,” he said.

The uprising succeeded in securing an area of the center and blocking out the authorities.

The upheaval involved about 120 inmates in a facility that houses about 620.

Of those, 55 have been sent to a unit with a working locking system, and 65 were sent to another facility that has greater security.

Trump Impeachment Lawyers Reveal 'Secret Weapon,' Plan to Use Dems Own Words Against Them During Upcoming Trial

‘Antithetical to Reason, Violates Human Dignity, And Is Incompatible with Catholic Teaching’