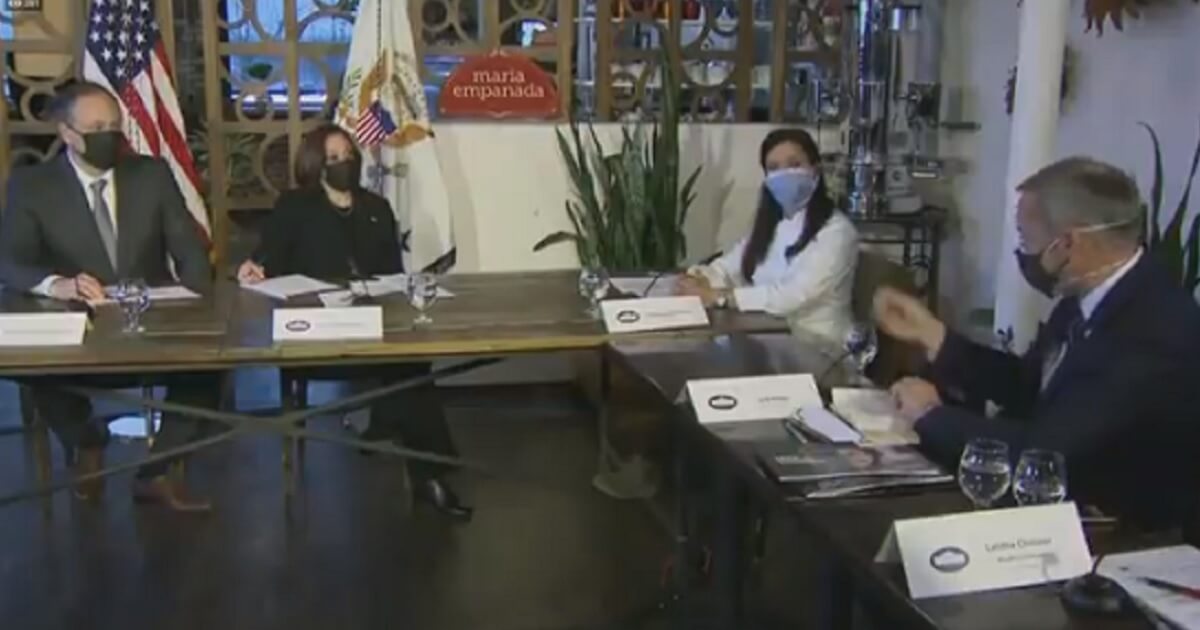 It’s what Democrats don’t talk about that really matters.

In the Philadelphia area on Tuesday, President Joe Biden visited a minority-owned, unionized flooring business as part of the administration’s “Help Is Here” tour, according to The Associated Press. There, he touted his $1.9 trillion COVID-19 relief package, saying that it “took some loud, strong voices to get this done … And it’s not like it passed with 100 votes. It was close.”

Meanwhile, in Colorado, Vice President Kamala Harris and her husband, Doug Emhoff, made several stops, one at a small business roundtable.

Quoth the AP’s writeup of the event:

“With Harris and Emhoff taking notes during a business roundtable in Denver, Lorena Cantarovici, who began making empanadas in her garage after emigrating from Argentina, told of how her small shop grew over the years into three Maria Empanada locations but then was forced to lay off workers when the coronavirus struck.

“She said 80% of her team came back through previous relief programs but it could take two years to get back to full capacity and ‘recover all this loss,’” the article continued. “Harris and Emhoff did their part by departing with empanadas in tow.”

Two interesting things I noticed about this event that had nothing to do with the veep and her husband towing along those empanadas. (Sloppy reporting, too: Were they chicken or beef?)

First, the AP reported that 80 percent of Cantarovici’s “team came back through previous relief programs.” No mention of which particular “relief programs” were involved.

Second, I noticed this anecdote from a participant highlighted by the RNC Research Twitter account didn’t make it into the AP’s story:

“I’ll tell you that … the [Paycheck Protection Program] was incredibly important to us,” the man said.

“You talk about volunteers. We’re a volunteer organization for a lot of our people. When COVID hit, we couldn’t have the volunteers anymore. But PPP allowed us to hire people during the COVID crisis to be frontline workers for us because, obviously, we can’t do what we do remotely.

“So it was incredibly critical for us to leverage that,” he said.

The man wasn’t identified in the RNC tweet, but a Colorado Public Radio report identified the only male participant as Jack Briggs, who is the president and CEO of Springs Rescue Mission.

Considering Springs Rescue Mission is an avowedly Christian organization, and Briggs is a retired Air Force general, it’s understandable why ostensible news organizations like The Associated Press and a Colorado Public Radio wouldn’t be anxious too quote him in what amounted to a publicity puff piece for Kamala Harris. Christianity and military service aren’t exactly strong points when it comes to the progressive program.

The combination is also a nightmare for a liberal like Harris.

Nonetheless, the man made his gratitude for the Trump administration’s Paycheck Protection Program clear.

Furthermore, I don’t know what “previous relief programs” Lorena Cantarovici is talking about — but if they were federal, they were all likewise shepherded through under the previous administration.

In other words, maybe this ought to have been called the “Help Was Here” tour if it was going to accurately describe the federal government’s response to the coronavirus.

This is an unpleasant fact the Democrats don’t like to acknowledge: The Trump administration’s relief packages kept businesses afloat. The Biden administration may be touting its changes to PPP — aiming aid toward the “smallest businesses” as well as women- and minority-owned firms — but that doesn’t change who really got the ball rolling.

Biden administration is going to roll out a bunch of changes to PPP including a special 14-day period for the smallest firms, help for sole proprietors, clarifying immigrant eligibility and more. pic.twitter.com/z8TxBMEr9d

It also doesn’t change that, somewhat bloated though the Trump administration’s aid packages may have been to secure Democratic support, the Biden administration’s $1.9 trillion lard-fest is an Amazon Wish List full of liberal agenda items all purchased with the taxpayer’s credit card.

But no. We’re now playing the “Help Is Here” card. We’re forgetting about businesses like Bitty & Beau’s Coffee, a business that employs individuals with developmental disabilities that was saved by a PPP loan.

“As a recipient of the PPP loan, we will continue to take up the charge and help everyone, especially people with disabilities, pursue the American Dream.” — Amy Wright, CEO and Founder, Bitty & Beau’s Coffee pic.twitter.com/mCz6oig6KM

Meet Michael from @bittyandbeaus. He stole the show today – he’s an inspiration as is his employer, small business owner Amy!

Because of PPP this unique 5 shop coffee chain could rehire their 120 employees, incl Michael, & cont. to brighten the days of each of their customers! pic.twitter.com/AQyZvO8YH0

“Bitty & Beau’s Coffee is more than a coffee shop; it’s a human rights movement. We employ 120 people with intellectual and developmental disabilities. And for most of them, it’s their first paying job, which made the decision for us to temporarily close all five of our shops especially difficult,” said owner Amy Wright when visiting the White House last May.

“But thanks to the Paycheck Protection Program and the incredible team at Live Oak Bank, all 120 of our employees are back on the payroll today and working from home, writing handwritten notes that we include with each online order we ship.”

But what about those small, minority-owned businesses Joe Biden loves to talk about? During the 2020 campaign, one hard-hitting, if completely deceptive, Biden ad featured a black woman named Tiffany Easley, owner of NV My Eyewear in Philadelphia.

“I opened NV My Eyewear three and a half years ago, and just as we were adding locations and employees, this pandemic brought everything to a halt. I had to permanently close one location and furlough my employees, and it’s my staff. They’re my family. It’s just heartbreaking,” Easley said in the ad.

“But what’s worse is that this president seemed to make everything else worse. Donald Trump and his administration left the American people behind.”

Small businesses are the backbone of communities across our nation, and we need to do so much more to help them. Donald Trump may have forgotten about them — but I never will. pic.twitter.com/RDYKzt1Qc1

NV My Eyewear is one of the businesses that got a payout from the first phase of the federal Paycheck Protection Program. Easley was awarded a loan of $27,000, which will be forgiven if she uses it to rehire staff, as she’s planning to do. #FakeNews

Here was a writeup of Easley’s situation from local outlet BillyPenn: “The reason she’s able to be optimistic about the future? For one, Easley is a woman of faith, she said. Also, she was able to score emergency financial relief from two different sources,” the outlet reported.

“NV My Eyewear is one of the businesses that got a payout from the first phase of the federal Paycheck Protection Program. Easley was awarded a loan of $27,000, which will be forgiven if she uses it to rehire staff, as she’s planning to do.”

But that’s the Biden team for you. They’re here to help — and they’re not going to bother acknowledging any help the people they’re helping received before them.

Unfortunately for Democrats and the mainstream media, as the clip from the Harris small business roundtable proved, many of the people who got helped aren’t going to forget who really did it.