Permanent Fencing Could Be Coming to Capitol, Would Protect Lawmakers from Peasants 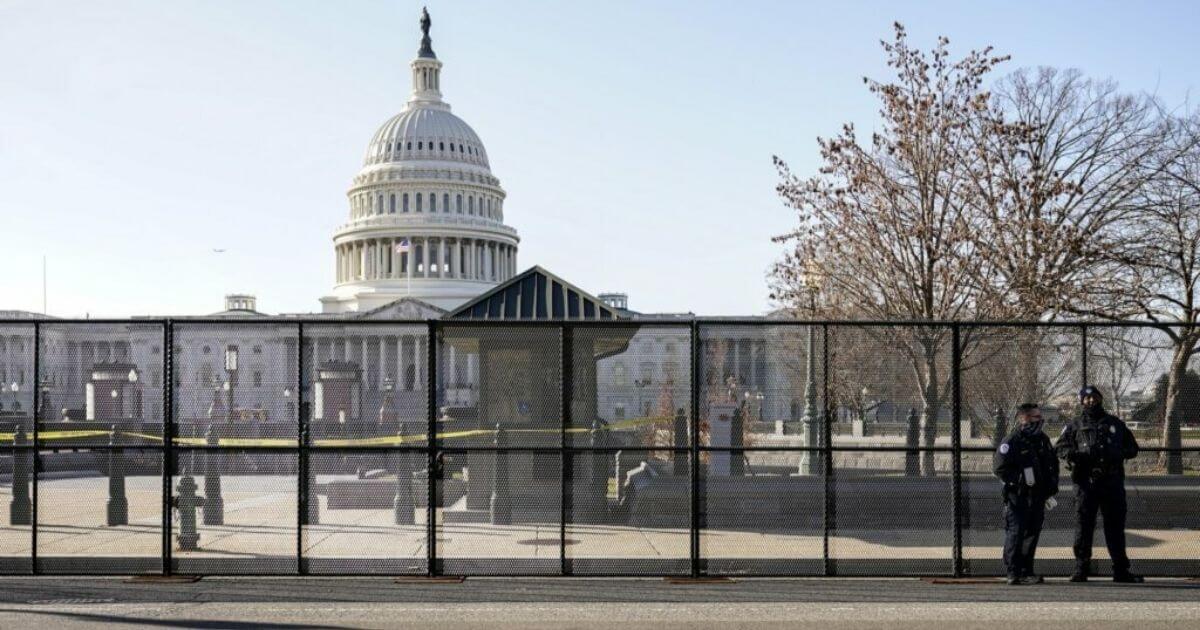 As congressional Democrats fearmonger about the security situation where they work, Capitol Police are calling for permanent fencing around the U.S. Capitol Building weeks after it was stormed on Jan. 6.

Acting Capitol Police Chief Yogananda Pittman on Thursday vowed to work with Congress to permanently secure the building, according to Politico, who erroneously referred to the Capitol incursion as an “insurrection.”

“In light of recent events, I can unequivocally say that vast improvements to the physical security infrastructure must be made to include permanent fencing, and the availability of ready, back-up forces in close proximity to the Capitol,” Pittman said in a statement.

New statement from acting US Capitol Police chief: “Vast improvements to the physical security infrastructure must be made to include permanent fencing” pic.twitter.com/6JMPfcn1E9

Her recommendation for keeping peasants away from lawmakers was met with a bipartisan groan, according to Politico, and even Democratic Washington, D.C., Mayor Muriel Bowser said the city would not accept “permanent fencing as a long-term fixture in DC.”

But House Speaker Nancy Pelosi, who never misses an opportunity to cash in politically, did separately call for additional security for members of Congress. Presumably taking a shot at her GOP House colleagues, the California Democrat said funding is needed for this extra security “when the enemy is within the House of Representatives — a threat that members are concerned about — in addition to what is happening outside.”

In an apparent reference to freshman GOP Rep. Lauren Boebert of Colorado, who has been open about her plans to carry a firearm to Congress, Pelosi added, “It means that we have members of Congress that want to bring guns on the floor and have threatened violence on other members of Congress.”

Democratic Rep. Pramila Jayapal of Washington also threw gasoline on the fire in calling for added protection at the Capitol. Apparently one for theatrics, Jayapal told reporters Thursday that some lawmakers felt compelled to buy bulletproof vests “because they simply do not feel comfortable with our colleagues, which is a very, very sad statement.”

The same people who want your communities inundated by cheap labor, illicit drugs, human trafficking and illegal weapons via a porous southern border are now very concerned about “security” — or at least they are acting as though they are.

It’s a good thing that lawmakers on both sides of the aisle have come out against building what would essentially be a large wall around the Capitol Building, though the alarmist rhetoric from Democrats like Pelosi and Jayapal suggests such a concept is not all that far off from something they would support.

And permanent fencing around the Capitol Building would be a terrible idea, at least insomuch as it would make a mockery out of the idea of “government of the people, by the people, for the people” that President Abraham Lincoln spoke of during the Gettysburg Address.

Lincoln, who directed the country through an actual insurrection, would probably have had business back to normal by Jan. 7 in D.C.

Then again, Lincoln probably wouldn’t have presided over a government that was so corrupt, self-serving, reactionary and intrusive that people would have felt the need to flood into Washington to share their displeasure.

It’s been nearly a month since the Capitol incursion, and not a single serious person on either side of the political divide has defended the indefensible actions of those who breached the building.

But the “insurrection” card has been overplayed by Democrats. A small fraction of people at an overwhelmingly peaceful demonstration entered the building. Still, no fires were set and no police officers were shot.

Of course, as we know, Democrats never let a bad situation go to waste, as they’re always seeking manipulation and sympathy.

They will use the incursion as a pretext to go after civil liberties and to justify crushing law-abiding citizens, American patriots and D.C. tourists as they simultaneously award those who pour into the country illegally with education and other entitlements.

Don’t be surprised if they eventually try to deny We the People access to the monuments, landmarks and buildings that represent our republic and its democratic values, having served as a light in the dark for the world for more than two centuries.

The people collectively own this country — a concept that Democrats and a handful of ineffectual Republicans can’t seem to ever remember during tough times.

Just as Hollywood’s anti-border wall celebrities protect themselves with armed guards and walls around their homes, Washington could soon turn into a green zone where a perimeter protects hypocrites from a threat that doesn’t exist anymore today than it did during former President Donald Trump’s 2017 inauguration.

No insurrection is coming, and none ever was. Like most government actions, barriers around the Capitol would be predicated on an outright lie.