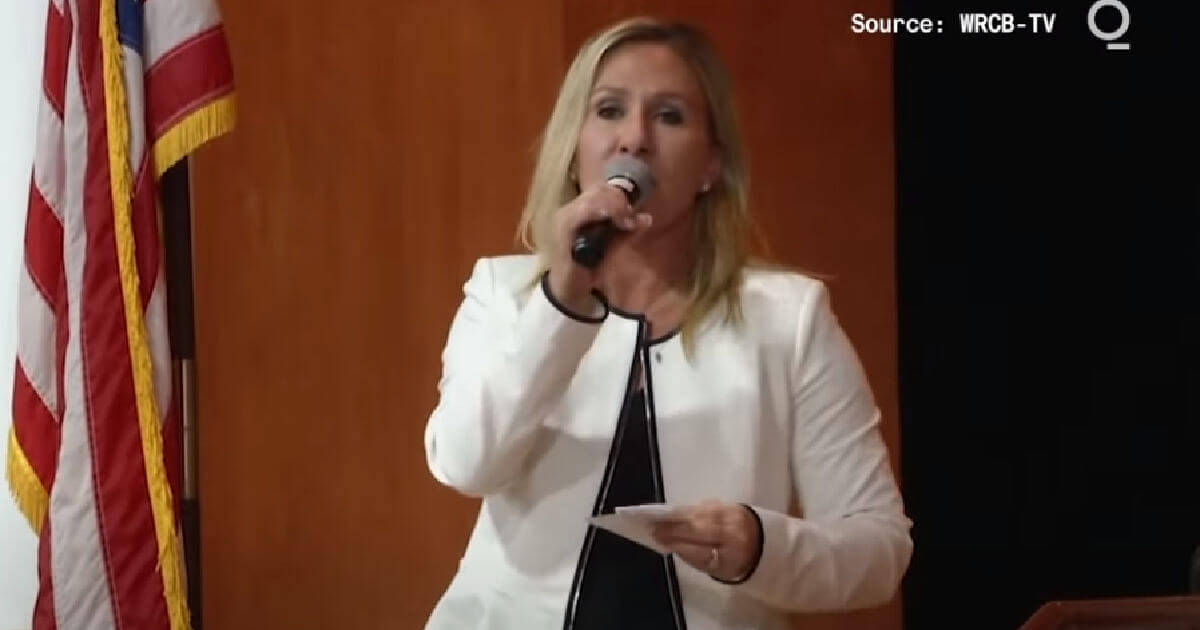 A fact-checking organization often criticized for the fairness and credibility of its fact checks, PolitiFact is sure to draw more criticism with a post this week.

Issued on Thursday, the fact check asserts that there are more than two genders in response to a sign recently put up outside of the office of Rep. Marjorie Taylor Greene, a Georgia Republican.

The sign reads “There are TWO genders: male & female. ‘Trust the science!’”

It was placed outside Greene’s office after Democratic Illinois Rep. Marie Newman, whose office is across the hall, hung up a transgender flag “so [Greene] can look at it every time she opens her door.”

Thought we’d put up ours so she can look at it every time she opens her door 😉🇺🇸 https://t.co/7joKpTh6Dc pic.twitter.com/aBGRSiIF6X

In a tweet of its fact check, PolitiFact said, “We checked, and the science is clear: Gender identity goes beyond male and female.”

Rep. Marjorie Taylor Greene put a sign outside her office that says: “There are TWO genders: male & female. ‘Trust the science!’”

We checked, and the science is clear: Gender identity goes beyond male and female. https://t.co/TXNLd1hoSJ

PolitiFact’s ruling not only relies upon questionable science but also leans heavily upon semantics, as has been the case with other fact checks issued by the organization.

Citing the Centers for Disease Control and Prevention, the World Health Organization and a handful of hand-picked experts, PolitiFact maintains that the proper definition of gender is a “social construct” that can be “masculine, feminine, a combination of both or neither.”

As it turns out, “gender” actually has multiple definitions, many of which fit the description on Greene’s sign.

According to the Oxford English Dictionary, “gender” can refer to “males or females viewed as a group” or the “state of being male or female as expressed by social or cultural distinctions and differences, rather than biological ones.”

Additionally, the fifth edition of Webster’s New World College Dictionary includes a secondary definition of gender that reads, “either of the two sexual divisions, male or female, into which human beings are divided.”

Given these findings, it appears that PolitiFact — in an attempt to discredit Greene — is merely cherry-picking its preferred definition of gender while discrediting all others despite their validity.

Furthermore, the etymology of “gender” reveals the definition indicated on her sign as the traditional designation.

According to a 2003 study on the word’s usage published in Archives of Sexual Behavior, Vol. 33, the definition promoted by PolitiFact wasn’t created until 1955, when New Zealand psychologist and sexologist John William Money first introduced the concept of “gender role.”

Heralded today as the father of gender theory, Money was the first scientist to experiment with the sex transitioning of prepubescent children.

After conducting this experiment on two twin brothers, David and Brian Reimer, Money claimed to have proven the theory of gender identity — now pushed by PolitiFact — by successfully transitioning David from male to female (Brian was used as a control subject).

In reality, however, Money’s work ended in abject failure. Both boys were sexually abused by Money during the experimentation, David eventually transitioned back to identifying as male, and both brothers eventually killed themselves in adulthood, according to The Embryo Project Encyclopedia, an open-access publication funded by the National Science Foundation and Arizona State University.

Nevertheless, Money’s work serves as the genesis not only of PolitiFact’s preferred definition of gender but also of the body of scientific literature — gender theory — that much of the fact-checking organization’s determination is based upon.

The scientific argumentation forwarded by PolitiFact to support its point is highly questionable, especially when contrasted with the works of sex neurologist Debra Soh and evolutionary biologist Colin Wright.

In one such example of this questionable argumentation, PolitiFact claims the existence of intersex communities (“intersex” refers to hermaphroditic individuals born with a mix of female and male sex characteristics) to be proof not only of additional gender categories but also of the notion that “sex is not necessarily binary.”

According to Wright, such arguments are based upon “fundamental misunderstandings about the nature of biological sex.”

“As a broad concept, males are the sex that produce small gametes (sperm) and females produce large gametes (ova). There are no intermediate gametes, which is why there is no spectrum of sex. Biological sex in humans is a binary system,” Wright wrote in an article for Quillette.

“The existence of only two sexes does not mean sex is never ambiguous. But intersex individuals do not demonstrate that sex is a spectrum. Just because sex may be ambiguous for some does not mean it’s ambiguous (and, as some commentators would extrapolate, arbitrary) for all.”

Moreover, Wright points out that transgenderism — and therefore the idea of “gender identity” — “has absolutely nothing to do with being intersex.”

“For the vast majority of individuals claiming either trans or non-binary identities, their sex is not in question. Primary sex organs, not identity, determines one’s sex,” he said.

Even If Divorced from Sex, Gender Is a Male/Female Binary

Another claim forwarded by PolitiFact — found under the subheading “Scientists say there aren’t only two genders” — the fact-checker quoted Dr. Jason Rafferty, a clinical assistant professor at Brown University, as saying, “A person’s gender identity may be masculine, feminine, a combination of both or neither, or it may shift over time.”

Conversely, in her book “The End of Gender,” Soh made the case that gender “is not a spectrum, a continuum, a kaleidoscope, a prism, or any other majestic-sounded metaphor that gender activism has dreamed up.”

After conceding that “[e]veryone, to some extent, is a combination of male and female traits” and “[n]o one is 100 percent male or 100 percent female or 100 percent gender-nonconforming,” Soh explained why gender identities do not exist outside of the male/female binary.

“When we think of the average man, he’s probably interested in a variety of things that most guys are into, like playing sports and building things, but maybe he also enjoys watching talk shows and talking on the phone. By the same token, there are plenty of women who like playing video games and competing in sports,” she wrote.

“It’s not appropriate to consider everyone who exhibits some degree of gender nonconformity as belonging to a third category of gender,” Soh said. “It’s more outdated to assume that someone who is gender-atypical is another category of gender entirely, than to consider them as part of the normal variation you’d expect within female or male, just like any other human trait.

“Gender is not a continuum or a rainbow or a diverse spectrum. It exists as two discrete categories, female and male, not as two polarities along a shared continuum along which human beings appear with equal likelihood.

“Even if we divorce gender from sex, the vast majority of people fall clearly into one of these two categories, as opposed to being equally spread somewhere between them.”