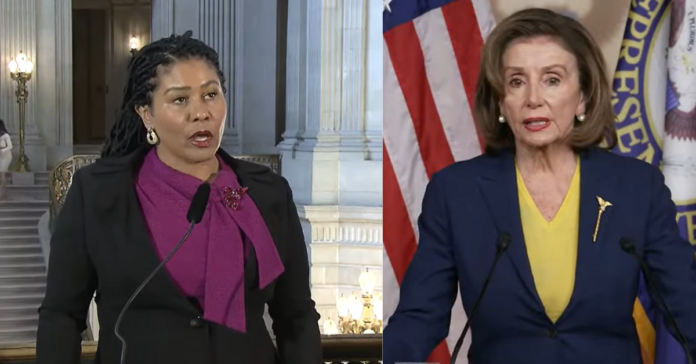 San Francisco Mayor London Breed shamed her fellow Dems over the out-of-control crime and progressive DA policies that are ruining our cities and declared a state of emergency in the Tenderloin, a notorious SF neighborhood known for a large homeless population and an open air drug market.

“The situation in the Tenderloin is an emergency and it calls for an emergency response,” said Mayor London Breed. “We showed during COVID that when we’re able to use an Emergency Declaration to cut through the bureaucracy and barriers that get in the way of decisive action, we can get things done and make real, tangible progress.

“We will use that focus and coordination to disrupt the illegal activity in the neighborhood, to get people the treatment and support they need, and to make the Tenderloin a safer, more livable place for the families and children who call the neighborhood home.”

Supervisor Matt Haney said: “We are losing over two people a day to drug overdoses, mostly to fentanyl, and mostly in the Tenderloin and SoMa. This is a public health emergency demanding a crisis level response, with massive urgency, coordination, and determination to confront this epidemic.

“We’ve demonstrated during the pandemic that our city can step up with solutions to match the scale and threat of a deadly epidemic. We need an emergency response for drug overdoses, with immediate rapid crisis intervention, outreach and coordination on our streets, with expanded treatment and detox.

“We have to act now with everything we have to save lives. This official declaration of an emergency will give us the tools we need to respond with the speed and scale required.”

“In an emergency, people need resources immediately not months from now. An emergency declaration allows San Francisco to cut through the red tape and obtain the contracts, resources and personnel to address the crisis conditions in the Tenderloin.

“We only have to look at our COVID response to see how an emergency declaration allowed us to quickly lease hotels, hire critical staff and establish testing and vaccine sites.

“Today’s action will expedite the opening of a linkage center and other essential resources.”

The Mayor’s office issued a statement that said:

“Today Mayor London N. Breed declared an official State of Emergency in the Tenderloin, allowing the City to waive certain laws to quickly address the crisis of people dying of drug overdoses on the streets of the neighborhood as part of the Mayor’s Tenderloin Emergency Intervention Plan. Similar to the City’s COVID-19 Declaration of Emergency, this action will eliminate bureaucratic barriers, allowing the City to quickly respond to the conditions relating to the health and safety of the people in the Tenderloin.

“The overdose problem has worsened, particularly over the course of the COVID-19 pandemic, but the recent rapidly deteriorating conditions in the Tenderloin caused by the opioid crisis put the lives of San Franciscans in serious risk.

“The Emergency Declaration allows the City to expedite the implementation of emergency programs like waiving rules around contract procurement and waiving zoning and planning codes to quickly open a temporary linkage site where people with substance use issues can receive behavioral health services and get off the street.

“The Emergency Declaration will apply to actions taken within the boundaries of the Tenderloin Police District.

“The Declaration of Emergency must be ratified by the Board of Supervisors within the next seven days, and will exist for no longer than 90 days.

“The second phase, which began earlier this week and will continue through the beginning of 2022, focuses on direct intervention for the most destructive problems facing the Tenderloin.

“The State of Emergency will allow operations during this phase to be more quickly implemented, including prioritization of connections to existing social and health services, more coordinated enforcement and disruption of illegal activities, and streamlined infrastructure response and improvements.

“The final phase of this intervention focuses on transitioning to sustained operations, which will help keep streets safe and accessible for everyone who calls the Tenderloin home,” the statement said.